Thanks to the return of Jund as the de facto best deck in Modern—or at any rate the most commonly-played—we have seen an important shift take place. Last year, during the era of Death’s Shadow, Fatal Push was the removal spell that defined the format. It was close to an automatic 4-of in any black deck, and drove deck builders to favor creatures that are naturally resistant or immune to it. Eldrazi decks play Reality Smasher and Endbringer, Scapeshift plays Primeval Titan, and Death’s Shadow decks were packed to the brim with Push-proof delve creatures. 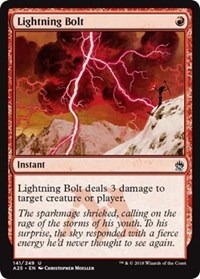 Since BBE pushed Jund back to the fore, however, things have changed. Lightning Bolt has reclaimed its throne as the most commonly-played card in the whole Modern format, and this has come at the cost of Fatal Push. Bolt is played in over 40% of Modern decks and almost always as a playset. Push has been relegated to just 20% of Modern decks, and these decks don’t even always run the full four.

What does this mean for the format writ large? There are important implications to Lightning Bolt reigning supreme, as cards that are easily Bolted out of relevance become a fair bit worse. 3-toughness creatures and fragile planeswalkers have always had a difficult time in the face of Lightning Bolt, and expecting to get full value out of Spell Queller, Mantis Rider, or even Bloodbraid Elf is a little optimistic these days due to the ease with which Bolt answers them.

Conversely, cards that are resilient to Lightning Bolt are in a position to really get some work done. Even if these creatures “just die to Push,” they stand to shine in a format where Bolt has overtaken Push as the removal spell of choice. Let’s have a look at some of the cards whose fortunes have improved!

Perhaps the best example of a card that has gained the most from the recent trend, Tarmogoyf illustrates the way in which a format can evolve. Today, ‘Goyf is a much more powerful and resilient threat, as Lightning Bolt just won’t get the job done in almost all cases. It wasn’t so long ago that Tarmogoyf was easily and readily dispatched by a Fatal Push, but as there just aren’t the same number of clean answers to this big, bad thumper, it’s much more likely to rule the battlefield once again.

A sensible Tarmogoyf pilot will never let it die to Lightning Bolt. Generally, a fetchland and a hand disruption spell will ensure a turn-2 ‘Goyf is immune to a Bolt in any case. The relative lack of Fatal Pushes in Modern right now means that Tarmogoyf is able to put in a lot more work.

Much of the time, Eldrazi Tron decks sought to deploy Push-proof threats such as Reality Smasher, and further attempted to blank cheap removal of this kind with a Chalice of the Void for 1. In the face of Lightning Bolts, this deck becomes a lot better—both Thought-Knot Seer and Walking Ballista can shrug off Bolts with relative ease.

Fatal Push cleaned up a Ballista just like that, and enabling revolt to remove a Thought-Knot Seer was trivial with fetchlands and the like. These huge tempo plays, where an investment of 4 or more mana could be answered with just 1, are on the decline. Even traditional Mono-Green Tron takes advantage of Thought-Knot Seer’s strength as a midrange threat, usually packing a few copies in the sideboard.

Just as the 4 toughness of Thought-Knot Seer positions it well against Lightning Bolts, Courser of Kruphix has the stats to live life on easy street. A 2/4 for 3 mana is a surprisingly excellent rate in today’s Modern, and with the format generally slowing down a fair bit, the value engine of Courser is a strong option for midrange decks (especially when paired with Jace, the Mind Sculptor).

Courser is an excellent blocker against much of the format, excelling in particular against Burn, where it keeps Goblin Guide at bay and buffers your life total. Courser offers pseudo-scry with shuffle effects—fetchlands synergize nicely with the 2/4 for this reason as it even helps to ease the squeeze of paying life for the perfect mana base. Overall, however, the fact that you can safely invest 3 mana into a slower creature like Courser without getting blown out by a Lightning Bolt is just excellent. Expect to see more of this card moving forward. 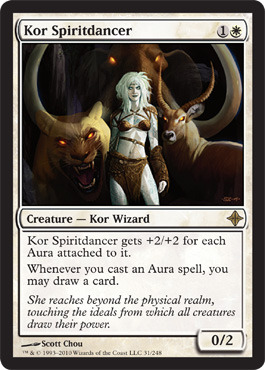 While both Fatal Push and Lightning Bolt are pretty horrendous in general against Bogles (or is it pronounced Boggles? I can never remember), I know which I’d rather have. Kor Spiritdancer is an obnoxiously effective draw engine, unless you have the Lightning Bolt then and there. As soon as they slap some pants onto her, she’s out of range.

The fact that Fatal Push takes down a huge Spiritdancer (or an emergency-mode Dryad Arbor) gives you a few percentage points against Bogles, and it’s a deck against which you need all the percentage points you can get. There’s only one thing worse for your soul than losing to Bogles, and that’s winning with it.

We really might be deep into some corner-case stuff with both Spiridancer and Swiftspear, but when a Burn opponent can string together two instants to save their Taylor Swiftspear from an oncoming Bolt, it’s clear to see just how much better Fatal Push can be as a no-questions-asked, nigh-unconditional removal spell. Sure, it might only come up a tiny percentage of the time, but the difference between a dead Swiftspear and a live one (especially a live one that is attacking you for 3) is huge.

Modern continues to sway and shift amid a constant cycle of innovation, experimentation, tuning, and tweaking, and understanding the cause-and-effect nature of something as simple as Lightning Bolt‘s popularity is one of the ways to get ahead in the format. Are there other cards benefit from the increase in Lightning Bolts and relative lack of Fatal Pushes? How are you adapting to Lightning Bolt being so heavily played in Modern? Let me know!