Glub, glub! Welcome to Modern—a format where fish are friends, not food. Ixalan has had little impact on the world of Modern, but when it comes to Merfolk, there is an exception. Surely by now you’ve heard about the Modern Merfolk deck. It posts a few Top 8 results here and there, but rarely wins an event or makes a huge splash. Because of this, there isn’t much discussion on deck building or strategy when it comes to this deck. Today’s article plunges into the depths of the deep blue and explores the new life Ixalan breathes into the gills of this powerful tribe. 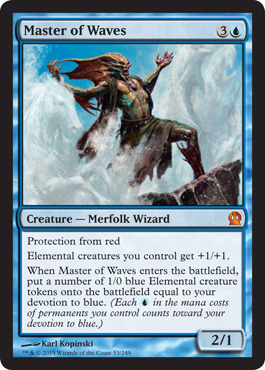 The truth is, it’s hard to fillet understand where fish stand in Modern. Though they have some solid results here and there, the numbers don’t support it being a tier 1 deck. Let’s take a look at the Grand Prix winning deck list from last year.

This looks like a relatively stock mono-blue Merfolk deck. 27 creatures, Aether Vials, Spreading Seas, and some removal. Winning a Grand Prix is an excellent display of a deck’s prowess. In my opinion, doing that cements your deck’s place as a contender in Modern, even if that is tier 2 or 3.

Many things have changed in the landscape of Modern since last year. The printing of Fatal Push has pushed cards like Tarmogoyf, Glistener Elf, and Spellskite down in popularity and given rise to black as one of the stronger colors in the format. As a result, cards like Tidebinder Mage and Dismember aren’t a huge priority for Merfolk anymore. Additionally, Master of Waves dies to Fatal Push, Collective Brutality, Walking Ballista, and Liliana, the Last Hope, making it somewhat awkward as far as top-end finishers go. So what can you replace these with?

Cutting down on the 4-drop Master of Waves is an exciting change for me. I always hated the awkward hands with 2 Master of Waves and no real way to advance your board early. Especially with all of the fast combo decks in the format that can simply ignore the Master, it felt like an awful time to play the deck. Enter Ixalan, and with it a brand new splash.

Ixalan has been touted as a relatively low power level set, evidenced in the minimal impact it has had on Standard compared to Kaladesh and Amonkhet block. This is primarily because of Ixalan’s strong tribal focus. Luckily for your aquatic allies, Merfolk are a featured tribe on Ixalan and you have a couple of new toys to play with. Placing well recently in events both IRL and on MTGO, we have U/G Merfolk, also known as Tropical Merfolk. Here is my take on the deck.

Splashing is nothing new for Merfolk decks. In the past, there have been white splashes for Path to Exile and Sygg, River Guide, and even green splashes for Collected Company. These splashes were widely unsuccessful and players usually bounced back to the mono-blue version shortly after.

So what does this green splash do successfully that failed in previous iterations? Put simply, it addresses the actual issues the Merfolk deck was having—aggressive starts and falling behind in card advantage. Playing mono-blue Merfolk does not give you access to the cards needed to shore up the deck’s weaknesses. Let’s discuss how the new cards in Tropical Merfolk help with these issues.

What appears to be a relatively innocuous card from Ixalan turns out to be exactly what the fisherman ordered. Cursecatcher has been serviceable in the past, but over the last year or so its usefulness has been questionable. Cursecatcher is a fine dork when it comes to pressuring cards like Collected Company, Gifts Ungiven, and Cryptic Command, but it does little else. The primary reason for Cursecatcher’s inclusion in the deck is to have early plays in the event you don’t have a turn-1 Aether Vial. Aggressive decks like Merfolk need to apply pressure immediately and consistently to remain competitive in a format as fast as Modern.

Kumena’s Speaker speaks to the issue of not being able to apply pressure out of the gates. Hitting for 2 damage per turn is a whole world apart from hitting for just 1 like Cursecatcher. While it may put pressure on the mana base to ensure you have green on turn 1, it is worth the inconvenience. Merfolk lives and dies by how quickly it can deal 20 damage to the opponent. A 2-power 1-drop is exactly the addition needed to smooth that out.

Ask any avid Merfolk player the best fish on the menu. They will easily tell you that it’s Silvergill Adept. The card provides ample power to the board while drawing you a card in the process. Aside from additional 2-mana lords, the next best thing you could have received was a Silvergill Adept impersonator.

Merfolk Branchwalker helps smooth out draws regardless of when it is deployed to the battlefield. Is it as powerful as Silvergill Adept in the card advantage department? No. But where it lacks in that category it makes up in hitting harder. In the event where you don’t explore into a land off of the Branchwalker, you will have a 3/2 body on the board as well as a free “scry” attached to it. Plop a lord down on the next turn and you’ve already assembled a 4-power creature ready to attack. That’s some serious smashing power.

Again, the mana can be awkward to be able to consistently cast Kumena’s Speaker and Merfolk Branchwalker on time. Adding the second color does come with a slightly lowered consistency regarding your mana base compared to mono-blue Merfolk. But this splash is worth it 100% and there are ways to construct the U/G deck to be less greedy. Speaking of mana, let’s look at the different ways you can go with the mana base.

Here are a few sample mana bases I’ve seen for Tropical Merfolk. My mana base was posted above, but it was inspired by looking at others who came before me.

I feel like this mana base is my favorite of the three, though the most expensive financially speaking. Personally, I cut the Unclaimed Territory for one blue fetchland just to have an additional source of blue for noncreature spells without giving up a green source. This mana base is not sufficient if you wish to play green spells in your sideboard, since Cavern of Souls cannot make colored mana for spells.

This is a solid mana base that allows for a green splash for sideboard spells. Personally, I am in the “4 Mutavault always each time” camp because having an extra threat that powerful as part of your mana base is too strong to pass up. This mana base eschews Cavern of Souls completely, which is music to many players’ ears if they are on a budget. But this does make you more susceptible to permission, burn, and Chalice of the Void.

This mana base was suggested by Merfolk aficionado Nikachu. He is an expert on everything Merfolk related and I suggest you check out his YouTube channel for more in-depth Merfolk musings. This mana base is great for splashing green spells in the sideboard (namely Natural State). If you expect less burn and counterspells in your metagame, this is a fine choice. Otherwise, my mana base works well if you are fine not having access to Natural State.

There is quite the selection of fish on the market to add to your spicy little deck. What fills the flex spots is best determined by the metagame you expect. But there are some inclusions that are set in stone for Tropical Merfolk.

In addition to these, I believe some number of Cursecatcher and Harbinger of the Tides is correct. I’ve found 3 Harbingers and 2 Cursecatchers to be optimal, but this number can vary based on your metagame expectations.

The next most contested slots are often filled by Phantasmal Image, Kira, Great Glass-Spinner, and Kopala, Warden of Waves. Since you want to reach 33 creatures, you can pick any 4 of these. My choice is 3 Phantasmal Image because I like to have extra lords where possible and 1 Kopala to try to throw a wrench into things here and there. There are merits to Kira as well, since she is better against 1-mana removal. If you are expecting more Fatal Pushes, Path to Exiles, and Lightning Bolts, I would err toward Kira and away from Images. If you are expecting more Walking Ballistas, Kolaghan’s Commands, and fast combo decks, I would include Kopala and more Images.

A playset of Aether Vials and Spreading Seas has been working well for me. I understand the desire for Dismember in this deck and see it frequently maindecked. I do caution that sometimes adding too many noncreatures can make awkward draws occur more frequently. The best “removal” in a sense is just trying to remove your opponent from the game as quickly as possible.

Vapor Snag and Echoing Truth are other considerations I’ve seen. Echoing Truth can be nice to catch an opponent off-guard, remove a problematic permanent like Ensnaring Bridge, or a key blocker. Again, I like the random utility that cards like this can provide, but without any cantrips or reasonable deck manipulation I’ve found them clunky and subpar.

The sideboard for Merfolk is fairly straightforward regardless of build. A bunch of 2- and 3-ofs litter most sideboards. The key point of contention when it comes to Tropical Merfolk is whether to dabble into green cards in the sideboard. Natural State is the main card that Merfolk will want access to since it can kill problematic cards like Blood Moon, Ensnaring Bridge, or Cranial Plating. This is mostly a metagame call or budgetary concern since I haven’t seen wild success in either direction regarding the green splash.

Merfolk is by no means an expensive deck by Modern standards but it is not terribly cheap. Aether Vials and Mutavaults are the big price tags in the deck and if you are going greenless in the sideboard, you will want a playset of Cavern of Souls as well. Luckily, Mutavault is getting a reprint as a Grand Prix promo next year, so you can expect the price of Mutavault to be slashed in half. Unfortunately, the cards in this deck see little play elsewhere, so choose carefully before investing. If you end up preferring the Cavern mana base, do note that Cavern may see a reprint late next year, but I don’t expect one immediately.

As it stands, you can get a version playing 5 fetchlands and green in the sideboard for around $500, which is a fine price for a deck as competitive and fun as Merfolk. In a bizarre twist of fate, the mana base without fetchlands is actually more expensive. Who’d have guessed?

Well, the tide is out and the ship has sailed. I’ve reeled in quite the load of fish tales here today and I hope you enjoyed reading. Merfolk are always evolving, and I am certain a more optimal and streamlined list will present itself in due time. I am crossing my fingers for a 2-mana Merfolk lord in Rivals of Ixalan, but that may be asking for too much. What are your thoughts on the Merfolk deck? Do you have a preference when it comes to a particular build? Let me know in the comments and until next time, don’t forget, “The tide of battle favors those who can swim.”