Legacy can be a tough format to get into. A pool of over 20,000 cards, a deeply-entrenched metagame, and the price tags of some staples mean that the format isn’t Magic’s most accessible. Nonetheless, Legacy is a rich and rewarding format to play, and Level One Legacy is all about helping you make a start and find your feet in the format. This week, I’m looking at Death and Taxes.

What Death and Taxes Does

Death and Taxes is a hybrid aggro/prison deck that combines elements of traditional White Weenie strategies (like the ones we see in Standard right now) with hateful and disruptive elements like Thalia, Guardian of Thraben and Phyrexian Revoker. The name Death and Taxes comes from the quote commonly—and mistakenly—attributed to Benjamin Franklin: it seems to have originated, rather, in The Cobbler of Preston by Christopher Bullock. In any case, the deck gets its name from the fact that there are, in fact, three things that are certain in life: death, taxes, and White Weenie.

The name aside, Death and Taxes is, at its core, an Aether Vial deck with interactive creatures, seeking to apply the game-winning combination of pressure and disruption. Aether Vial helps to beat counterspells while cheating on mana, and with Thalia’s supporting cast of Wasteland and Rishadan Port, this deck also “taxes” opposing mana, too. Each other card has its role: Mother of Runes contests removal and helps to beat opposing creature decks, Flickerwisp combos with Aether Vial for both offensive and defensive trickery, and Stoneforge Mystic opens up an Equipment package, getting Batterskull, Jitte, or a Sword, as required by the matchup.

Death and Taxes was touted as the best deck in Legacy after the banning of Deathrite Shaman and Gitaxian Probe, but that didn’t really come about. It’s still a force to be reckoned with, and it’s capable of stopping blue decks in their tracks, but it hasn’t ascended to the level of dominance many expected. Still, it’s a reasonable starting point for Legacy, as it’s a relatively cheap deck that benefits from recent reprints: Wasteland and Aether Vial are the most expensive cards in stock lists that feature no duals and a lot of inexpensive creatures like Flickerwisp and Phyrexian Revoker.

The hybridized game plan of Death and Taxes offers favorable matchups against a lot of Legacy decks. In particular, against unfair combo like Sneak and Show. The fact that Death and Taxes can play a powerful disruption game while still cracking in for damage each turn really tests a lot of decks, as they end up having to fight a two-front war. We’ve talked about the role of pressure plus disruption, and Death and Taxes does this better than most. 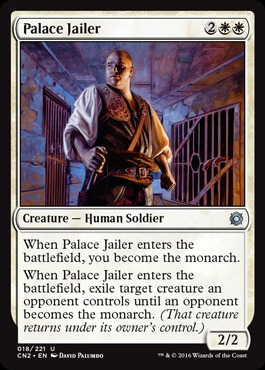 Its diverse creature package allows the deck to fight on a lot of very diverse axes. For example, the late game can be ground out with the aid of Palace Jailer, the only commonly-played Monarch card in the format that is a very powerful card advantage engine against creature-light decks like Miracles. Sanctum Prelate can stonewall unfair decks, while Stoneforge Mystic is a great toolbox that makes countermagic look very silly indeed, especially when combined with Aether Vial.

Death and Taxes also plays incredibly powerful noncreature cards: Swords to Plowshares is the best removal spell ever printed, and it can even bring in Path to Exile against decks without basics like Grixis Delver. The fact that it can control and manage the board while still applying a clock is huge, and the clock tends to be pretty quick, as well. On top of that, Karakas ruins decks like Sneak and Show or Reanimator, and it can play planeswalkers out of the board to beat opposing removal.

It’s also surprisingly consistent for a non-blue deck, with Recruiter of the Guard offering a useful tutor effect, and very rarely runs into mana issues or dies to Wasteland with its huge number of basics (occasionally it runs into color-screw, if you’ll believe it, thanks to its colorless lands). Overall, Death and Taxes is one of the best ways to play fair Magic in Legacy, and has been a mainstay of the format for a long time.

Aether Vial is a double-edged sword, however, and seeking to abuse it to play your best Magic isn’t the most reliable plan. When Death and Taxes doesn’t draw Vial, the difference in power level is ridiculous—all of a sudden, it’s playing a slow and clunky game, deploying one threat a turn and running into countermagic. Aether Vial is a lynch pin of the deck, and you’ll quickly notice how bad Death and Taxes can be without it. 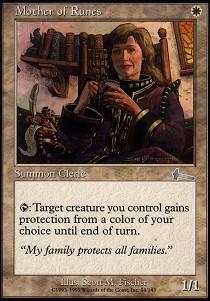 Additionally, as a creature deck, Death and Taxes is not very good against opposing removal. Mother of Runes does a fair bit of work in this regard, but the deck is still pretty cold to cards like Terminus or Toxic Deluge. Most of the creatures in this deck are pretty puny and die to a stiff breeze, so creature interaction can be very effective. Similarly, it often can’t beat big creatures without Swords to Plowshares or a piece of Equipment—something like a Gurmag Angler will stonewall Death and Taxes.

Most of the creatures have an offensive bent, too, wanting to attack and do damage rather than stay home and guard the fort. This means that Death and Taxes doesn’t play a defensive game very well. They can block with their high-power creatures, sure, but that’s not a sustainable game plan when it’s costing them board position. Forcing Death and Taxes into a defensive position is a good way to exploit their weaknesses.

Finally, this deck has a very, very high skill ceiling. While it’s easy enough to pick up and play on a basic-to-intermediate level, mastering this deck takes a lot of practice. Not only do you need to know all the tricks and sequencing with cards like Aether Vial, Flickerwisp, Mother of Runes, etc., you also need to have a deep knowledge of the format so as to craft a bespoke game plan for each match. Death and Taxes is not a linear deck, and autopilot will not get you very far. In short, Death and Taxes is easy to pick up, but very hard to master.

How to Beat Death and Taxes

There are a number of very effective ways to beat Death and Taxes—plenty of hard-hitting sideboard cards are at your disposal to tilt this matchup in your favor. For example, Izzet Staticaster, Liliana, the Last Hope, and Dread of Night are all one-card powerhouses against Death and Taxes, mowing down their tiny creatures with ease. But there’s a downside to those cards—they’re not very good against most other Legacy decks, so you pay a price to include them.

As good as the mana base looks, it can run into real issues, particularly on Plains-light draws. Wastelanding a turn-1 Karakas can be disastrous for Death and Taxes, especially if they don’t have a Vial, as stranding them without any white sources leaves much of their hand unplayable.

Artifact hate is also quite good in this matchup, despite it being a creature-based deck. Not only can it remove the all-important Vial, it can also destroy Equipment and even Phyrexian Revoker. Flexible Shatter effects like Abrade and Kolaghan’s Command are at the highest premium against Death and Taxes.

Even though Death and Taxes can apply a quick clock, it’s as quick as all that. A fast Delver start will easily outrace them (they have no flyers except for Flickerwisp and Serra Avenger), and often simply seeking to win the damage race will force them into a defensive position. That—once again—is the last place they want to be.