During the first week of February, I’ll be in Bilbao with the rest of Team Coverage as we bring the live stream of Pro Tour Rivals of Ixalan to the world. For those new to Modern, getting across the huge scope of viable decks is intimidating. To bring everyone up to speed for the Pro Tour, Level 1 Modern is a column that seeks to explain the game plan, strengths, and weaknesses of the format’s major archetypes. This week, I’m looking at Affinity.

Affinity—occasionally known as “Robots”—is the marquee aggressive deck of the format. This deck has been around for a long time, and has consistently put up strong results. A singular reliance on artifacts means that this doesn’t have an Achilles’ heel so much as it has an Achilles’ leg: Artifact-based sideboard hate has pretty effortlessly kept the robots from dominating the format entirely.

Characterized by its exceptionally strong game 1 against most of the field, Affinity players hope to dodge backbreaking post-board cards like Stony Silence in games 2 and 3 so as to take out the match. Affinity is also very heavy on combat mathematics, with cards like Arcbound Ravager rewarding those intimately familiar with the squillion, billion different interactions possible between all of the deck’s moving parts.

Affinity’s greatest strength is its speed and explosiveness. It’s not unusual for an Affinity player to be almost empty-handed at the end of turn 1—this is a combination of the fast mana available with Mox Opal and Springleaf Drum, along with the deck’s ridiculously low curve. These explosive starts often result in six or seven permanents on the battlefield by turn 2, and can create early leads that are impossible to come back from.

Modern is full of the very best removal, and generally an all-out creature-based aggressive strategy will suffer when contesting a format overrun by cards like Fatal Push or Path to Exile. Not so with Affinity, as Affinity’s “big cards” such as Cranial Plating (which can be equipped at instant speed) and Arcbound Ravager (which can out-value interactive opponents) mean that point removal spells don’t have the impact you’d expect against a deck full of cheap creatures.

This effect is not limited to spot removal, however—many of Modern’s more expensive spells that are designed to limit the power of aggro decks don’t punish Affinity as they should. For example, a Living End player can’t rely on their marquee sweeper doing the same job when an Arcbound Ravager is in play. Similarly, both Inkmoth Nexus and Blinkmoth Nexus make a card like Cryptic Command a lot less effective in buying time for control decks, and even Ensnaring Bridge doesn’t get it done against a pair of Signal Pests.

One surprising twist with Affinity is just how quickly it can pile on damage and steal a game you may have thought was stabilized. Cranial Plating (especially in multiples) combined with evasive creatures like Vault Skirge or the mighty Ornithopter can get you out of nowhere, but the real threat to watch out for is Inkmoth Nexus. One-hit poison kills are all too common when a Plated-up Nexus flies across the battlefield.

Affinity is known as a “game 1 deck.” This means that while it will often win the first game, after sideboarding things become tricky. The reason is simple: over the years, exceptionally powerful anti-artifact cards have been printed, many of which spell lights out the moment they resolve. Classic examples of cards that wreck Affinity post-board are Stony Silence, Shatterstorm, and Ancient Grudge. 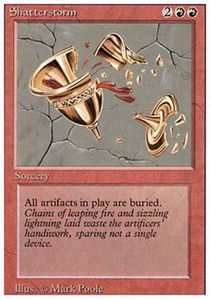 The problem only worsens when examining the sheer number of devastating cards in regular starting 60s—Grixis Shadow has contributed to the huge number of Kolaghan’s Commands that Affinity players have to fight through (you have to work very hard not to get a 2-for-1 with Kolaghan’s Command against Affinity), and even cards like Abrupt Decay can pull apart Affinity’s game plan when precisely deployed against cards such as Cranial Plating.

Affinity also can’t afford to take advantage of the sideboarding process to the same degree as other decks can due to the streamlined and linear nature of the deck. Over-boarding is a real issue with Affinity, as it relies on a critical mass of artifacts and so isn’t able to dilute its game plan by changing things up. While Affinity’s surprisingly good mana means that it can sideboard anything from Thoughtseize to Blood Moon, the deck suffers terribly when too many cards are brought in and so isn’t particularly flexible.

Additionally, the fact that Affinity relies on a density of artifacts also means that there isn’t room for much interaction. Generally speaking, a few slots are given over to Galvanic Blast or Thoughtcast. Outside of this, however, more or less every card in the deck supports plan A: flood the board with small creatures, and use payoff cards (Plating, Ravager, Master of Etherium) to seal the deal.

How to Beat Affinity

As you might expect, the best way to tussle with the robot menace is with your sideboard. Across more or less every color, there are excellent options that can single-handedly turn the tide of a game against Affinity.

The premier anti-Affinity card is of course Stony Silence—which has utility against other decks such as Lantern Control and green-based Tron—but other options exist. Shatterstorm, Ancient Grudge, Vandalblast, and Hurkyl’s Recall all do a huge amount of work against Affinity.

The next step in the plan is to draw these cards after having included them in your deck—that’s the hard part. A legitimate criticism of the Modern format is how swingy its matchups are based on “silver bullet” sideboard cards and if you’re ever doubting how true that is, play Stony Silence on turn 2 against Affinity: It’s more or less game over every time.

Having said that, “draw your sideboard cards” isn’t particularly actionable advice. The only real steps you can take in pursuing that objective is to mulligan aggressively to find the cards that matter. A decent 7 could improve to an unbeatable 6, given the impact these sideboard cards have!

As the emblematic Modern aggro deck, Affinity rewards skilled and practiced players with a fast, explosive, but extremely linear game plan. Despite its power level and ability to steal games, disrupting Affinity’s onslaught is straightforward and the fortunes of the deck wax and wane depending how prepared the field is with anti-artifact sideboard cards. Expect to see the robots out in force at Pro Tour Rivals of Ixalan!