This article almost never happened. While I enjoyed reviewing the two Commander sets, I skipped Planechase because there are usually only one or two cards that end up making a dent in Legacy.

I changed my mind when Wescoe messaged me. His suggestions have a sense of earnestness about them, like if he had a Legacy column he’d be using them but he isn’t so he’s shipping them to me instead.

There is some danger there, just like taking a friend’s advice on deck selection. Then again, they don’t call me Caleb “Danger” Durward for nothing!

No one calls me that. 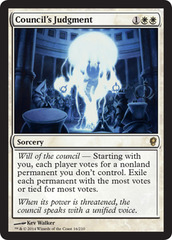 Whenever you see a voting card, just skip the first chunk of text and go straight to the “tied for most votes” ability, because that’s the only one that’s relevant in Constructed.

Council’s Judgment is getting hype as a Vindicate effect that hits hard-to-deal-with threats. Since it doesn’t target, it can answer cards like Nimble Mongoose, True-Name Nemesis, and Emrakul.

Unfortunately, Vindicate itself has been falling out of favor, and I’ve noticed similar effects like Oblivion Ring are less good than they were a year ago. Three mana is a ton in Legacy, especially when the one-drops are so powerful. A large quantity of your deck needs to function despite your opponent’s flurry of Wastelands and Dazes, which constricts the average curve of the format. If a card costs more than two, it had better win the game.

If we compare it to other cards printed in Legacy-legal casual sets, Council’s Judgment is closer to niche playables like Order of Succession and Unexpectedly Absent than format changers like Scavenging Ooze and Baleful Strix.

The problem is, disruption in Legacy needs to be incredibly efficient to be competitive. Most of the time, Swords to Plowshares is just better. Heck, some CounterTop decks are shaving Plow, and people want to add clunkier spot removal?

Call me Captain Negative (or better yet, Captain “Danger” Negative), but I just don’t see it. I do think it’ll see some marginal play, similar to Unexpectedly Absent, and it might even find a home in a deck that really needs the effect, but I don’t see it as a format staple. 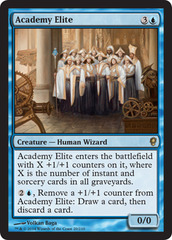 Importantly, Academy Elite pitches to Force of Will.

You can win games with this card. On turn three, when Nimble Mongoose gains threshold, three of the cards in you graveyard are lands and the other four are spells, with some of those spells having traded with opposing spells. By the time you get to four mana in these decks stuffed with cantrips and disruption, both graveyards should be well stocked. Assuming there are no active Deathrite Shamans, I’m guessing this guy should consistently be somewhere between a 6/6 and a 12/12 (but that’s wild conjecture).

The Deathrite Shaman impact is an important note, as it has all but forced out cards like Knight of the Reliquary and Terravore.

Unfortunately, the decks with the highest concentration of cantrips are also the ones that are least likely to cast a four-mana anything. Even if a deck does get there often enough, Jace makes for a tough benchmark. 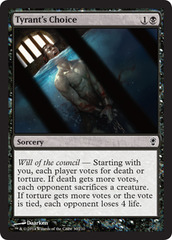 Recently, Karsten Cotter pointed out how Tyrant’s Choice and Bump in the Night make an excellent case for splashing black in Burn.

I’d probably model it a bit after the Modern version, since that deck already splashed black to some success. Deathrite Shaman is too good to pass up. 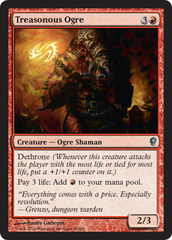 This guy is interesting. Not as a flat ritual effect, though you can bank mana in him by waiting a turn (Grinning Ignus). As a pure ritual, though, costing that much mana and using that much life is dangerous and clunky.

On the other hand, diddling around with TinFins has taught me that Children of Korlis works really, really well with life-costing activated abilities. With a single Child, you can make a potential 12 mana (netting five). The second one doubles that number. If you found a way to recur Children indefinitely, you generate infinite mana and infinite life.

I doubt there’s a shell for it, but the interaction is neat. 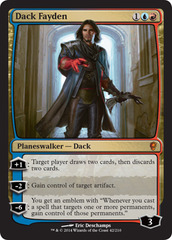 Dack Fayden vs. Gambit from the X-Men, go!

Dack Fayden makes me want to discard cards for value, and they don’t even have to be good cards. Firemane Angel, Deep Analysis, Reckless Wurm, you name it. When Lotleth Troll was first printed, I messed around with a Jund value shell that “abused” Squee and Faithless Looting. That was a bad instinct. No one should play Squee, especially with Deathrite Shaman in the format. Now, with Dack, I probably will anyway.

As far as competitive Magic goes, I could see this guy in RUG’s sideboard. Three mana is fine, it pitches to Force of Will, it can help hit threshold on turn three, and it turns chaff into gas in the late game. In the unlikely case that you ever ultimate him, your Forked Bolts and Fire // Ices start stealing Tarmogoyfs and Knight of the Reliquarys.

The only reason it’s not maindeckable is because the -2 ability is so narrow, but in matchups where the -2 is relevant he goes from marginal to overpowered, which is why he’ll dominate Vintage.

Consider Baleful Strix. The card is so good at bricking RUG’s threats that RUG has to bring in Ancient Grudge to hopefully avoid getting 2-for-1’d. Even if it is flashed back on a Shardless Agent, it’s still a 1.5-for-1.

If RUG has a Dack Fayden against a Baleful Strix, the tables are turned and now the Shardless deck needs to find an answer before it can attack with its Tarmogoyfs. In some cases, Dack will protect himself.

Now consider Dack vs. Umezawa’s Jitte. Even though the Jitte won’t fall off the opponent’s creature, you can still equip it to one of your own and go to town (not Nimble Mongoose, of course). If you don’t have a creature, that’s also fine because you control the Jitte. If your opponent’s equipped creature has a power less than 4, it can’t even attack profitably due to the life gain.

If Dack doesn’t turn out to be a slam-dunk sideboard card, it’ll be because of Batterskull. For starters, answering Batterskull at sorcery speed isn’t exactly ideal since half the time it’ll ride a Stoneforge Mystic into play at eot or mid-combat. Even if you do manage to steal a Batterskull without the opponent bouncing it in response, you still haven’t answered the 4/4 Germ token. Returning Batterskull to the opponent’s hand isn’t ideal, so the only way to really answer the Batterskull (yes, your own shiny Batterskull that you just liberated from your opponent) is to equip it to one of your creatures. For some decks that’s plausible, but RUG rarely hits the fifth mana source.

Even with the Batterskull awkwardness, Dack’s filtering ability is strong, and I’d start him as a 1-1 split with either Grudge or Grip.

Off the top of my head, I’d want this card against Deathblade, Painter, Shardless BUG, Tezzeret, and MUD, which is a reasonable set of decks.

Thalia is an issue when you’re playing against Death and Taxes, but they play a ton of equipment and I like the idea of taking an Aether Vial after they’ve invested turns into it.

Since UR Painter plays Goblin Welder and needs blue cards for Force of Will, Dack is playable in the main deck there. If you ever got him to ultimate, you could start stealing permanents with Pyroblast since it doesn’t need a blue card for a legal target (unlike Red Elemental Blast). 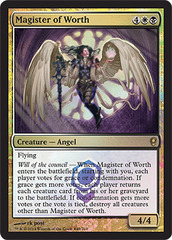 Ah yes, the first card spoiled. As far as viability goes, a wrath plus a body isn’t enough by itself or we’d be messing around with Desolation Giant and Phyrexian Rebirth. Yet, I see this card in Nic Fit for a few different reasons.

1) Nic Fit has the ramp to support a six-drop or two.

2) This particular six-drop is a good one to put into play off of an opposing Show and Tell.

3) When combined with a Recurring Nightmare, you can lock an opponent out of the game.

Outside of Nic Fit, it loses its appeal. Intuitively, it seems good enough for Reanimator, but it pales in comparison to Elesh Norn, Tidespout Tyrant, and Ashen Rider. To consider Magister the curve needs to support it, the 4/4 body needs to be relevant, and the deck needs to have some synergy with the ability.

One of my favorite things to do is talk Magic tech, especially over a good meal, and today Joey Mispagel and Larry Waymon introduced me to Bogart’s Smokehouse, a Memphis-style BBQ place in the heart of St. Louis. While chowing down on a half rack of the most perfectly cooked ribs I’ve ever eaten, I got to hear Larry talk about his recent PTQ Top 8 with GB, how Slaughter Pact overperformed vs. Twin and how Thrun beat the blue control decks by itself.

Before we left, he showed us a Standard brew.

This is definitely one of the more interesting Flamespeaker shells in Standard. Instead of just drawing cards for the sake of drawing cards, it’s drawing toward a powerful machine gun combo of Staticaster + Gorgon’s Head. It also features Chandra and Keranos as backup draw engines.

Heck, Keranos can become a combo piece too if you manage to turn it on and equip it. Reveal a nonland card? Murder your guy.

I like how, even without Staticaster, Gorgon’s Head is still useful for forcing through Flamespeaker.

Izzet Charm shines as a counterspell that can gain value off of a Flamespeaker reveal.

After discussing the deck, we all agreed that Ember Swallower might not be the right card for the slot. The deck already has the two best blockers in the format in Frostburn Weird and Boros Reckoner, and Ember needs too much work before it can compete with the other four-drops in the format.

This is my take on the deck:

Ash Zealot is another first striker that can benefit from Gorgon’s Head, and Fanatic of Mogis is a more aggressive four-drop that takes advantage of all the devotion to red. I think a third might be better than Ral Zarek, but Larry mentioned untapping Nykthos and that sounds sweet.