Spring is nearly here and the excitement continues to mount for Shadows over Innistrad. Not only does the set look epic, but we also anxiously await the next Banned and Restricted announcement in hopes that the spring rain will wash away the Eldrazi winter. While I think that this is very likely to happen in Modern, I anticipate that the DCI will take a wait-and-see approach to the Eldrazi when it comes to Legacy.

The Legacy Eldrazi decks have been putting up solid finishes across a range of events both in real life and on MTGO. The archetype is a wild frontier, since in a gigantic format such as Legacy, the card pool provides more viable options than you can play!

I don’t want to go too deep into the basics of the deck since a bit of information has been written about it over the past two weeks, but I would instead like to focus on a specific way of building the deck designed by my friend and Legacy Eldrazi officinado Jon Johnson.

Jon has been brewing and winning with multiple builds of Eldrazi since before playing Eldrazi in Legacy was hip. I remember back before the Eldrazi fad caught on at PT Oath of the Gatewatch that Jon called me raving about the deck in Legacy after taking down a large local tournament with it. I wasn’t focused on the comings and goings of Legacy at that moment and wrote it off as, “oh, you are a wild man with your Legacy Eldrazi brew…” (After all, Jon also won a large local cash event playing a Legacy Werewolf-based prison deck.) But in this case, Jon hit the nail on the head and was far ahead of the curve about the Eldrazi in Legacy.

Anyway, everybody knows the deck is great, but he did share his current build with me and I got to play and practice with it a little bit—I think the list is really great.

The big pull to play a white version of the deck is to gain access to exceptionally sweet sideboard hate cards (some of which I’ve moved to the main deck) and the raw power of Eldrazi Displacer.

Everything in its Proper Displace

Displacer is an extremely powerful creature. The card has a nice sized body for the price, but the fact that it can also protect your creatures or move opposing creatures out of combat is a huge game changer.

Ever blinked a Germ Token attached to a Batterskull? Oh boy does that feel great. Goodbye Marit Laige, though I never knew you at all! It can also hold off an Emrakul, the Aeons Torn against a Sneak and Show deck, which is absurd, or unflip a Delver of Secrets. It blinks your own Thought-Knot Seers to continue ripping your opponent’s hand apart. The list goes on and on and on.

Unlike the Modern versions of the deck, the Legacy version doesn’t play with Drowner and so you don’t have as many blink-for-value cards in your own deck to abuse and his value is largely defensive. 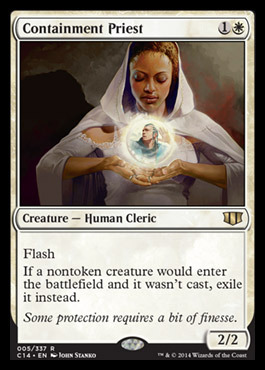 The huge payoff card for our Displacers is Containment Priest. The deck originally had Eldrazi Skyspawners, but Jon admitted that they were a little bit underwhelming. We decided to cut them, moved Priests into the main deck, and I’ve been happy with the decision.

Containment Priest is a fantastic sideboard card against decks like Elves and Reanimator, but it is also an insane combo with your Displacers. Since Priest prevents creatures from entering play when not cast, whenever you blink a creature, it stays exiled forever. So the Priest and Displacer team up to straight-up exile whatever you target!

Notes on the Sideboard

Most of the main decks for these decks are pretty consistent. Chalice of the Void and Thorn of Amethyst are a pretty standard package, and for the most part, there are only so many Eldrazi that you could realistically want to play! The Ancient Tomb lands, are, well, Ancient Tomb lands…

The real trick to gaining an edge is the sideboard.

Containment Priest was so good in the sideboard that I actually wanted to move them to the main deck. In the matchups where the card is good, it really shines, and I don’t mind having the whole lot of them post-board against a wide range of matchups.

The rest of the sideboard is tuned to allow the deck to become more MUD-like, in the traditional sense. Winter Orb, Null Rod, and Phyrexian Revoker provide you with options to attack the mana of a variety of different decks.

Keeping an opponent to only one land untap per turn seems particularly insane, especially since every land you untap adds 2. I have had a lot of success with Winter Orb in the past in various RUG and BUG Delver decks, and it is leagues better in this deck than it ever was in those.

I’ve really enjoyed playing this deck over the past week or so and the white splash adds a lot of unique value.

Eldrazi winter may be coming to an end in Modern, but I’m not sure that will be the case with Legacy. There is certainly a chance that Legacy will experience an Eldrazi spring and summer! The good news is that Legacy has a huge card pool and I certainly believe there are decks that can combat the Eldrazi onslaught. But just because the format affords for other decks to compete doesn’t mean that Eldrazi isn’t a fantastic deck choice for an upcoming event!