Magic: The Gathering is a complex and difficult game, and Ixalan is proving to be one of the most punishing and challenging formats for Limited in quite some time. Many pro players are saying that they’re simply trying to avoid train wrecks—failing to position yourself properly at your table can have dire consequences. When it comes down to the wire and you’re playing one of the toughest Limited formats in recent memory, what’s the best way to approach Sealed?

Ixalan is a tribal set. That cannot be overstated. There have been tribal sets in the past, but the cards in Ixalan are of a lower-than-average power level and the tribal payoffs are more situational than usual, meaning that hitting on those synergies has even more of an impact than it ordinarily would. With Grand Prix Phoenix around the corner, I’ve put together a crash course on the tribes so you know what to be on the lookout for when you crack your packs on Saturday morning.

Ixalan’s conquistadors take over through large numbers and grinding their opponents into dust. Anointed Deacon is the key player at common—it turns your evasive Skymarch Bloodletter and Skyblade of the Legion into high power beatsticks, and lets your 1/1 tokens trade with real creatures all while staying ahead in the race with lifelink.

Paladin of the Bloodstained is part of the glue that holds the deck together, providing a rock solid body along with a 1/1 token. If you happen to be lucky enough to open a Sanctum Seeker, you’ll have a pretty formidable board in no time. Bishop of the Bloodstained at uncommon does a pretty good impression of it too.

Black-white also has a lot of the best removal in the set, with Contract Killing, Pious Interdiction and even Walk the Plank helping you clear the way for your Vampires. Even though Ixalan is a relatively low power set, there are still some big creatures and bombs to have to contend with, especially in Sealed, and catch-all removal spells like those offered by black and white can help settle the score after a big play. 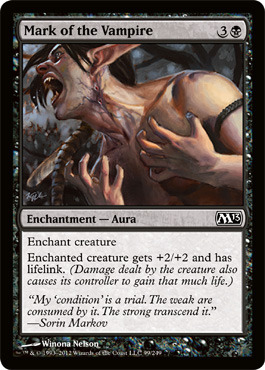 Mark of the Vampire is back and one of the more playable Auras in Magic’s history. Casting it on a Skyblade of the Legion puts it out of range of Lightning Strike, Unfriendly Fire, and a standard Firecannon Blast, and will yield a 6-life swing each turn, but black or white removal spells could bring it down. That being said, if you can get in one or two hits with it, trading it for a premium a removal spell for that much of a life swing isn’t a bad deal at all.

Merfolk is probably the tribe that relies most on synergy. Sure, any blue-green deck would be happy to have Shapers of Nature, but a lot of the cards look fairly innocuous at first sight. Jade Guardian and River Sneak seem unassuming until a River Heralds’ Boon lands on them.

River Heralds’ Boon is the linchpin of the deck in a lot of ways. Aside from making big unblockable or hexproof creatures, it also acts a strong combat trick with lasting impact and when everything lines up perfectly, you end up getting a 2-for-1 and leave your board bigger than before. In Draft, it’s a high pick for Merfolk as it’s a big payoff card, but in Sealed you should play as many as you can get.

Blue-green decks are historically tempo oriented with blue cards clearing the way for green’s beef. Merfolk doesn’t have the big creatures for exactly that, but it is certainly tricky enough with combat tricks, multiple strong bounce spells (especially Perilous Voyage), and Watertrap Weaver to keep your opponent on the back foot.

As a 3-color tribe, defining Pirates is tricky as the format is still largely made up of 2-color decks. That being said, if there was ever a time to splash in Ixalan, this is the deck for it.
The presence of Treasure tokens blurs the lines between the Grixis colors that make up the tribe, but this extends even further. Some players have been drafting “5-color blue” and in Sealed, where bombs matter more than ever, it’s not unrealistic to open a couple of Sailor of Means, Prosperous Pirates, and a Contract Killing, and use them to play a Vraska or a Vona.

For the most part, blue-black Pirates seem to come up more regularly than other combinations as the majority of both Treasure producing and Treasure payoff cards are in these colors, with Deadeye Plunderers providing inevitability. Sailor of Means is a role player in that it’s easy to pick up in Draft, and you’ll likely have one or two in your Sealed pool if you end up playing Pirates, and while it can stall aggressive decks a little bit, it becomes underwhelming fairly quickly. Siren Lookout is much more potent, and Pirate’s Cutlass and Siren’s Ruse can offer explosive starts and value plays respectively.

As an aside, Pirate’s Cutlass is playable in almost any deck. Or at least, any deck that is interested in being aggressive or has evasive creatures—a River Sneak with a sword in its teeth will make short work of many opponents.

While red-black Pirates has some good cards, that’s essentially all they are. There isn’t much synergy or reward for playing a dedicated red-black Pirates deck, and the same is largely true for blue-red. It certainly feels like blue and black are the anchor colors with a small off-shoot for red, but if some of the Pro players at the World Championship are to be believed, Swashbuckling can be a strategy in and of itself.

Dinosaurs largely divides into two main color pairs: red-green and white-red, with green-white being less common. Each of the 3 colors has a premier uncommon Dinosaur in Charging Monstrosaur, Imperial Aerosaur, and Snapping Sailback. If you’re lucky enough to get your hands on a Drover of the Mighty, you can pretty easily splash one of these three if your deck happens to not be playing that color, and Otepec Huntmaster can sometimes make them come out earlier and pack an even more potent punch. Its white equivalent, Kinjalli’s Caller, has proven significantly less impressive.

If you’re unable to get your hands on an Imperial Aerosaur, Pterodon Knight, and Grazing Whiptail are strong commons to fit the 4-drop slot. Pounce is often the removal spell of choice for Dinosaurs, with Savage Stomp being a nice upgrade to it where available.

Of the uncommon gold Dinosaurs, Raging Swordtooth is probably the strongest, and Belligerent Brontodon requires building around to make the most of it.

Dinosaurs boils down to a midrange deck, with the green-red skewing slightly slower and the white-red more aggressive. A perfect example of this divide is the difference between Territorial Hammerskull and Thundering Spineback—both are powerful cards in their archetypes, but they do almost opposite things.

Dinosaurs are strong in all 3 colors, so figuring out what balance to strike when looking at a pool may be difficult. Often you may have to land wherever your removal or other support cards lie, or you may be drawn in by a powerful uncommon. In any case, I’d expect some variant of Dinosaurs to be very popular in Sealed as they are individually powerful cards that don’t require as much synergy as Vampires, but have more payoffs for synergy than Pirates.

That should jog your memory and get the gears turning about Ixalan Limited for upcoming events. Signups for Grand Prix Phoenix are open, and you can sign up at www.gpphx.com for a chance to battle with the best of them.

Denis is an avid Magic player and content creator - he helps produce Top 5 and Scry Me A River on ChannelFireball.com and works as the Marketing Director for CFB Events.