Last weekend was one of the best Magic weekends of my life. I had actually told myself that I would dial back the amount of Magic I played if I didn’t do well enough to requalify for the Pro Tour at any of the 4 Grand Prix (Indy, Seattle, Atlanta, Pittsburgh) this month. The weekend before Seattle, I was at GP Indianapolis and posted an unremarkable 1-3 drop after 2 byes.

On my flight from Baltimore to Washington International, the flight crew announced that the plane was full. When we took off, my row had an empty middle seat. I took it as a good omen.

Legacy is one of my favorite formats that I wish I had more time to play. People can play almost any archetype they want to (tempo, control, combo, or hybrids of any of these). Lands is an odd one in that it’s a combo prison deck (I can’t even think of another example of a deck like this). I started playing Legacy in the very early days of the format (playing Vial Goblins), but even before that, my old college friend Israel Marques would force me to play Shuhei Nakamura’s Red Deck Wins (with Rishadan Port and Wasteland) versus his version of the Rock with Vampiric Tutor/Ravenous Baloth, and a lot of other goodies. Suffice it to say, I really enjoy Rishadan Port and Wasteland because they evoke so much nostalgia for me.

Kurt Spiess won a StarCityGames Open in Baltimore 2014 with the following list (destroying all of the blue midrange decks in dominant fashion):

In the tournament, I chose to play an updated version of this deck for the following reasons:

The core of the deck has remained mostly the same since Kurt’s victory in 2014, but there are some new updates. 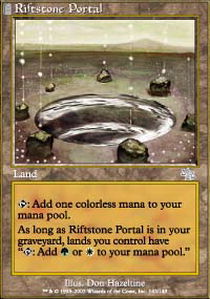 I included Riftstone Portal for a few reasons:

This combines perfectly with another card that wasn’t in Kurt’s list originally:

Molten Vortex is the 5th Punishing Fire that happens to be a lot better and faster versus a lot of decks. You bring it in against Miracles as well as most midrange decks, because it can get under the Counterbalance plus Sensei’s Divining Top and it’s excellent at killing any amount of small creatures very quickly.

So What Happened in the Tournament?

Here’s a quick rundown of the rounds:

Some interesting situations in the tournament:

Round 4 versus Reanimator in game 3.

I get off to a quick start making a Marit Lage on turn 3, and the same Iona, Shield of Emeria is forced to chump block three times (being brought back each time by Exhume).

Round 6 versus Oops All Spells.

He mulligans once in game 1, and passes the turn without playing a land. From a previous round, I knew he was on Oops All Spells, but I wasn’t sure of the exact kill mechanism, so I decided to leave up Crop Rotation for Glacial Chasm for multiple turns in a row (because if he’s on the Mimeoplasm/Lord of Extinction/Murderous Redcap kill, Glacial Chasm counters it). I eventually get Cabal Therapied, and I decide not to Crop Rotate in response. He names Crop Rotation and kills me with the following sequence: Dark Ritual into Balustrade Spy, targeting himself, milling his entire deck. 3 Narcomoebas entered play with 2 Bridge from Belows in the graveyard. He then cast Dread Return targeting Underworld Cerberus, then played Cabal Therapy again sacking the Cerberus and returning 3 Spirit Guides, a Wild Cantor, a Laboratory Maniac, and a Street Wraith which ended up killing me.

Game 3, my opening 7 is fairly bad, so I mulligan into a hand that can cast a turn-1 Sphere of Resistance. Unfortunately, I do not get a turn 1, and just die to the Laboratory Maniac kill again.

Round 7 versus the Lands mirror.

This mirror is a very odd one, but if both players get the engine going, whomever draws more Explorations or Manabonds just Wastelands all of the opponent’s lands. But in this game 1, my opponent flipped over maindeck Karakas and Bojuka Bog which meant winning would take a lot longer. He made a few critical errors, though, which let me win the game (trying to Wasteland my Thespian’s Stage when there was a basic Forest out that I could copy, as well as never Loaming back his Bog to nuke my graveyard). He also made a 20/20 into my ability to stage his Karakas and bounce the token.

Round 9 game 3 versus Miracles.

He’s on the play, plays fetchland, and passes. My turn 1 is land, Mox Diamond into Exploration into Sphere of Resistance. His turn 2 is fetchland, go. My turn 2 is land, go. His turn 3 is tap out for Rest in Peace. My turn 3 is Rishadan Port, Choke. The game essentially ends then, but it technically took 10 more turns to kill him.

I mulligan into a hand that has Stage plus Depths plus two other colorless lands and I decide to keep (on the play), and Phil ends up mulliganing to 5. On his turn 3 upkeep, I use Thespian’s Stage targeting his Tropical Island because I have no green mana. He decides to Stifle, which is kind of what I want to happen. On my turn, I attempt to Stage my sandbagged Dark Depths, and then Phil calls a judge to clarify how Dark Depths works. The short answer is: you need to Stifle the copy ability, because the Dark Depths zero ice counter trigger would keep triggering otherwise. So he gets the correct ruling and Stifles it. I then try to Stage the Dark Depths again next turn, and it goes through successfully. Game 2 plays out very similarly in that I run him out of Stifles and he doesn’t have a Wasteland for the Stage. (For the record, the best time to use Wasteland is after you let the copy ability resolve but with the Dark Depths sacrifice trigger on the stack, you can Wasteland the Staged Depths since it checks to see if you can sacrifice it to make the 20/20).

Round 13 versus Shardless Sultai.

This matchup is mostly academic, except I made a mistake in game 2 where I drew a Mox Diamond and played it into his Null Rod discarding my Wasteland, instead of Wastelanding my own Riftstone Portal to get green mana. This had a cascading effect on the game which let him use Liliana’s ultimate and then I wasn’t really able to recover in time.

This was covered in great detail on the mothership, but before the match, Martin seemed pretty convinced that Aluren was favored in this matchup. I think this is true, but by a narrow margin. I view his build of Aluren as a Shardless Sultai deck that happens to have a combo kill in it which makes it a more difficult matchup for Lands. In the end, the plan was to keep him off 4 mana so I can’t get combo killed. In game 2, I made a major mistake in not killing the Scavenging Ooze first with Punishing Fire, which meant I had to waste all my mana on another turn to kill the Ooze which opened the door for Aluren to kill me.

In the Top 8 matches, I think only game 2 versus Christian Calcano (a good friend of mine, and ironically both of our first GP cashes were at GP Philadelphia 2008, where he defeated me with Doran by drawing Shizo, Doran, and Jitte versus my Goblins deck) was interesting.

Getting my Punishing Fires Extracted when it happened was mildly annoying but not the end of the world. He had to have drawn it off Ponder that turn, because he didn’t Surgical Extraction them the two turns before. In addition, I’d rather have Life from the Loam active than Punishing Fire active so I can Glacial Chasm lock if necessary or make an unending supply of 20/20s. This is also why I basically kept one Tranquil Thicket in my hand for the entire game.

But here’s where I made a strategic planning error: I was convinced during the late turns of the game that Calcano’s last 2 cards were Submerge and the last Surgical Extraction. Given this, I thought a good plan was to kill all of his lands to play around Submerge, or to Gamble for Molten Vortex to get around this (Vortex would easily just kill all of his creatures, then him by that point in the game).

Therefore, the correct plan was to try to make a 20/20 as quickly as possible, and just Wasteland my own Taiga so he can’t Submerge it for free.

After that game was over, it felt like something out of a dream that I couldn’t possibly imagine happening. I had made Top 8 of a Legacy Grand Prix and managed to take the title in decisive fashion.

There’s so many people that I’d like to thank, but a few specifically:

I welcome any questions about Magic (or Lands more specifically).

Thanks for reading, it was a crazy journey.

Jarvis started playing Magic during Revised, but didn't jump into sanctioned Magic until 2004 as a college student. He enjoys Constructed and deck building, especially older formats with deeper card pools. He's played off and on the Pro Tour, but is hoping to avoid the PPTQ/RPTQ system to requalify again.