Here’s my Unpopular Opinion: Kuon, Ogre Ascendant can be a fun Commander.

Yes, that’s right, we’re back to the Kamigawa block well. I figured taking an article off to let the whole block rest a little bit was fine, but now we’re back, and I’m fully unapologetic. I like Kuon a lot, as I like cards that constrain players’ resources while still being fun to play with and against. Given that “am I building Shauku Stax?” is a question I asked myself at one point today, I feel pretty happy with where I’ve landed.

The plan, as it is for this whole article series, is to take an underappreciated Commander and build a $50 budget deck around it. Kuon is certainly underutilized – with only 22 decks on EDHRec, it’s well below the median, and I’m excited to give one of the copies I have sitting around my home collecting dust a purpose for once.

Here’s Kuon – I think we can learn plenty just from looking at the card. 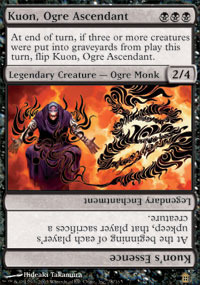 BBB for a 2/4 is obviously underwhelming – we won’t be dealing commander damage with this one. Instead, we’ll be trying to control the board and win by breaking the symmetry of Kuon’s Essence, sacrificing our low-value creatures while hoping to hit paydirt on the other end of the transaction. It takes some work to turn Kuon into enchantment form, but that’s not too hard to accomplish. Let’s start by taking a look at some of the creatures that will help enable things:

This type of effect is hands down the easiest way to flip Kuon. All you need are two opponents with creatures and you’re off to the races.

Most of the other Grave Pact effects are out of our price range, but Butcher of Malakir sneaks into the deck by virtue of costing 7 mana, which certainly keeps the price down. I didn’t want to make this Yet Another Aristocrats Deck, since I’ve probably built dozens of those in my lifetime, so you won’t be seeing that whole engine – just this piece.

Kuon can flip on anyone’s turn, and this card can fulfill the condition all by itself. If the next person up in the order has five or more creatures, they’re locked into destroying the Archfiend or letting their board be wrecked while Kuon becomes more threatening.

Beyond Kuon, we need more ways to benefit from the deaths of creatures. Here’s our merry crew of opportunists:

Rats, Zombies, and, with a little work, Demons are all possibilities as side benefits for watching creatures die, as are card draws and some incidental life gain. Sangromancer is probably the weakest of this group, but I like having a little extra cushion in my life total since so many of the draw effects in mono-Black cost life.

Sometimes the sacrifice engine won’t be running and we’ll just need to blow something up. This is the demolition team.

Meteor Golem is widely applicable, while the other two are more focused on creatures. Shriekmaw gets you 2/3 of the way to a Kuon flip if you evoke it, so that’s pretty cool.

Let’s move on to some more utilitarian creatures:

Want something to sacrifice? This is your all-star.

Sad Robot has never been more affordable in my memory, and that means more ramp for non-green decks. Burnished Hart is a great card to have around as well, and it can help you trigger Kuon with its self-sacrifice.

With all the sacrificing going on, I couldn’t pass up the chance to make some sort of broom army. It’s probably not the best, but it sounds like too much fun.

I wanted a couple more powerful ETB triggers for reasons that will become clear later. Plus, both of these cards are just good in general.

We have to close out games somehow, and that often means crashing in with flying Demons (and Harpies, if Abhorrent Overlord has anything to say about it.) The less abhorrent ones have some ancillary helpful effects as well.

Let’s move on to the noncreatures and see what kind of support we have for this whole operation.

We’ll need creatures to sacrifice to Kuon’s Essence, and both of these cards do a passable job of providing some fuel for that engine.

Play one of these, cause mass havoc, then cast Kuon and end your turn – you’ll be flipping your Commander faster than one of those HGTV shows flips houses. You know the one I’m talking about, which is convenient, because I do not.

Don’t want to be involved in the sacrificing process? No problem! Pressure your opponents’ boards with these convenient effects. They all have fun twists, which means they’re all exciting and situational rather than being boring photocopies of each other. Isn’t that what makes Commander fun?

With all these creatures dying, why not use them for our own purposes? Steal your opponents’ strongest combatants or wiliest utility creatures and gain maximum value.

Card draw holds decks together, and mono-Black affords us plenty of solid options. Liliana’s Contract makes a surprise appearance in a deck with juuuuuust enough Demons to keep opponents guessing and potentially steal one in a thousand games – the rest are fairly straightforward.

I’ll admit, the mana cost on Kuon just made this too tempting. On your second turn, in a world where each of your opponents have summoned some sort of mana elf or lowly 1/1, cast Innocent Blood, then Dark Ritual out your Kuon. Instant groans for the whole playgroup.

Mass removal that gives you some degree of control can help keep your own board intact or make sure Kuon is still around. These three are great exemplars for that particular mission. Vile Requiem may be slow, but if it’s left alone, it can do some serious damage to an unsuspecting opponent’s board. Of course, anything with verse counters has to be read by the entire table, so it rarely gets forgotten.

Some more ways to benefit from creatures dying, with a little extra flavor thrown in. Revel in Riches could win you a game here or there, but is that more or less likely than Liliana’s Contract? I’ll leave the math to someone else.

Sacrifice a Gray Merchant or Meteor Golem to Kuon or another sacrifice effect, then watch it return to the battlefield and do its devilish dance all over again.

Alternatively, just sacrifice it to Blood for Bones and go to town with that same ETB effect while also getting a Raise Dead in the bargain. I can’t resist putting Blood for Bones into basically every deck that can accommodate it.

In case you were confused about how budget manabases work, we’re going to have a lot of Swamps. Defile is all too happy to leverage that, and the other two cards will clean up what Defile doesn’t handle.

Don’t leave home without graveyard hate. Just ask our graphic designer, Geoffrey, who recently defeated me with a Sedris deck I designed for him even after the table wiped his graveyard out twice, how much earlier he would have won if it wasn’t for those two Scavenger Grounds.

Mana ramp. Pristine Talisman is once again here to cover some of the life loss from the card draw.

I couldn’t justify going entirely without full board wipes, and with our merry complement of swamps, Mutilate should be more than enough to clear most armies away.

I’ll just write some nonsense in this section so you know that I’ve copy-pasted it into the next budget article, because I’m going to be continuing to sleeve these up in this series for a while. First I’ll say something semi-helpful, like “you should always have some way to deal with pesky nonbasics.” Then I’ll start asking you about your opinions on the new Paper Mario game. It’s gotten some negative reviews, but I watched my friend play it for an hour or so and it looked sweet. Thoughts? (I think you should put more effort in Eric – Ed.)

Premium graveyard removal at a price you can afford – an ETB tapped land.

You know what would really tie the whole deck together? 31 swamps. It feels like exactly the right number for some reason. Speaking of exactly right, we’ve now spent $49.54, which leaves 46 cents. 46 is the international dialing code for Sweden, but I’m pretty sure that call would cost more than the money we have left in the budget. Now that we’ve had that massive digression, let me show you the full decklist in all its glory. Don’t forget to tweet at @RagingLevine with suggestions for future installments, spoiler-free reviews of Paper Mario: the Origami King, or more much-needed commentary on international dialing codes. See you next time!