I’ll be leaving for Pro Tour Rivals of Ixalan in less than a month. Since I’ll be pretty busy drafting and learning the new set when it comes out in a couple weeks, I don’t have much time left to figure out what I want to play in Modern. Among the (too) many decks I’m still considering, there are a couple of Knight of the Reliquary decks.

The first is based off of Todd Stevens’ list, which recently showed up in the 5-0 lists piloted by “Patxi.”

The biggest difference with my current build is the sideboard. Here is where I’m at right now:

The other big difference is that I’m not playing Aven Mindcensor. I tried out the Bird Wizard and was underwhelmed. One of the strengths of the deck is that a lot of your creatures can take over the game on their own, and I want to limit as much as I can the number of gimmicky creatures I’m running. It is especially important against Death’s Shadow variants or Jund decks to have as few creatures as possible that they can afford to ignore. That being said, I do plan on giving Mindcensor another shot, and he is probably your best option alongside Tectonic Edge against TitanShift.

The deck might not have any blue cards, but it plays out like a control deck in most matchups. You usually just want to get ahead with the synergies between your creatures, ideally playing a Knight of the Reliquary on turn 2 and following it up with Courser, a Tracker, or a Collected Company on turn 3. Path to Exile is the only noncreature spell besides CoCo and your most important card in many matchups, especially against creature decks like Humans, Merfolk, or Affinity. It will also be your most common target for Eternal Witness alongside CoCo because of the unique role it plays in your deck and how cheap it is.

Voice of Resurgence might appear out of place but it is very important against most of the blue decks and part of your global strategy against Death’s Shadow decks, a matchup where you usually don’t want to be attacking until you’ve gone wide enough. It is also very good against any kind of Liliana of the Veil deck.

Scavenging Ooze is versatile and threatening enough to earn its spot despite the fact that it will not net you a card when dealt with right away. It gives you game against decks that rely on their graveyard like Dredge or Storm, and it can go toe-to-toe with a Death’s Shadow in the late game more often than you would think given how grindy the games tend to be. 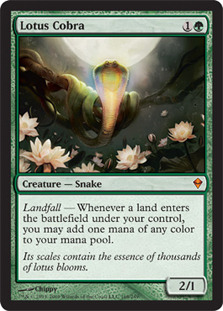 I’ve been liking the 1 copy of Lotus Cobra. It might seem like a win-more card, but the extra mana it generates can be crucial when you’re digging to specific cards (usually Path) once you go off with Knight/Tracker/Courser. It is part of your nut draw, but you never want to draw more than one.

Most versions play 3 or 4 Courser of Kruphix, but I don’t feel like the card is strong enough to play the full playset, especially given how heavy you are in the 3cc department, but once again I could be wrong and the more Coursers you play, the higher the value of Azusa goes. 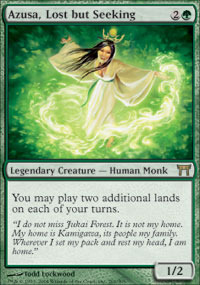 I still haven’t made up my mind about Excavator and Azusa. Azusa is either the best card you could play or an overcosted Squire, which makes the card really hard to evaluate. I’m not sure Excavator provides enough “quality” value, but I felt like I was doing slightly worse without those cards in my deck. I started with 4 Excavator and multiple Azusa, but felt like my draws were getting picked apart and I needed more raw power, so I kept cutting them for more Trackers/Witness. I’m not sure if playing only one of each makes a ton of sense, but it’s not an easy balance to strike.

The mana base isn’t easy to get right either. You’re fairly limited as to the number of colorless lands you can play. I didn’t have any Bojuka Bog in my 75 most of the time but I’ve come around and now run 1 main and 1 sideboard. Storm is popular online, and they usually won’t play around it, and Bog is also great at slowing down the Mardu Pyromancer deck (a.k.a. trophy machine) and its Bedlam Revelers.

I’m also trying a couple Field of Ruin over extra Ghost Quarters, but to be honest, I haven’t been very good at keeping track of which one I would rather have in general. The one choice I see in most lists and do not understand is the second Plains. I’ve pretty much never been in a spot where I wish I had it in my deck unless I “misfetched” at some point—not enough reason to play it over another green source or utility land.

If you exclude Engineered Explosives, all the cards in my sideboard are either CoCo hits or KotR targets. Todd Stevens, who has played the deck way more than I have, likes a more silver-bullet-based sideboard. My theory is that CoCo is the reason to play the deck, and I want to make sure they stay as good as possible after sideboard. The Eldritch Evolution package also doesn’t make much sense to me given that people are going to be bringing in more removal against you anyway.

I know Modern is a vast format, but I’ll try to go through each matchup in one or two sentences.

Grixis Death’s Shadow: Slightly favored. You usually don’t want to attack them until you’ve got the kill.

Jeskai Flash: Good matchup. They struggle to pressure you, and you have too many problem cards and just the right amount of removal.

Storm: Game 1 should be pretty bad (too small of a sample to know how much Bog matters), but feels favored post-board and overall with the 4 hatebears.

Tron: Close matchup. You usually can slow them down enough with your own lands.

Humans: Bad matchup, and the reason why you might want something like Engineered Explosives, Wrath, Elspeth Sun’s Champion, or Settle the Wreckage in your sideboard. It’s also possible that Fairgrounds Warden is a better option.

Eldrazi Tron: Slightly favored. Try and keep them off All is Dust mana if you can afford to.

Burn: Bad matchup. More Coursers would help but they also have access to Destructive Revelry after board. There are sideboard options but they are usually very narrow, which I dislike in Modern.

Abzan: Unsure, but I would guess fairly even.

Dredge: Slightly unfavorable. Ooze is often too slow if their draw is good and you don’t have a bunch of mana guys. A matchup where you would probably do better with more Coursers, and one of the main reasons to have Settle in your sideboard.

TitanShift: I would guess that this is a bad matchup, even though my results suggests otherwise (also Mindcensor, etc.)

Mardu Pyromancer: Slightly favorable, maybe even a little better than that with 2 Bogs in the 75.

Lantern: Tracker is one of the best card against them as long as you have something to draw into. You don’t game 1 but you do game 2 and I think it makes you a favorite.

The deck might seem like it plays too fair for Modern and durdles too much, but it is surprisingly annoying to play against and I’m sure my opponents felt like they were facing “unfair” draws at times. I particularly remember enjoying playing against Through the Breach/Emrakul and quickly getting to the point where his combo just didn’t even matter anymore—I had a healthy life total, a bunch of extra Clues out to sacrifice, and even Birds to block.