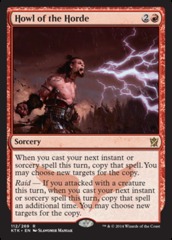 Jeskai Charm will allow us a choice of dealing 4 damage to our opponent, putting a creature on top of its owner’s library, or giving all creatures we control +1/+1 and lifelink until end of turn. This provides a damage spell that we wanted to combo with Howl of the Horde, but also allows us to remove a creature, for at least a turn, to gain control or set up a big turn with Howl.

Casting Howl of the Horde costs three mana, or if we’re lucky, casting it twice costs six mana, and beyond that we’ll have to actually cast another spell as well, so we’ll want to find some way around that. The obvious solution is Narset, Enlightened Master. Whenever Narset attacks, we get to exile the top four cards of our library and cast any noncreature spells revealed for 0 mana until end of turn! In addition, Narset provides an attacker to trigger the raid mechanic on Howl of the Horde, so it seems like a perfect fit. Of course, because of Narset, we won’t want to play a lot of other creatures, since we can’t cast them off of the reveal.

A solution to this problem isSarkhan, the Dragonspeaker. It’s an attacker when we need it to be, we can cast it off Narset, and also can be used in a pinch as a removal spell with its minus ability. Planeswalkers are great in general with Narset, as they will provide continual value over several turns. Another inclusion is Jace, the Living Guildpact. Again, we can cast it off of Narset, we can use the minus ability to control the board a little bit, but also, we can use the plus, and sometimes know we have a spell coming when sculpting our turn before attacking with Narset. (It is worth noting that scry lands will also have this effect sometimes.)

We can use Treasure Cruise sparingly in this deck. While it’s great with Narset, and great with Howl of the Horde, especially if we’re able to Delve for quite a bit when casting it, it’s really not a card that we want to draw multiple copies of in our opening hand. The power level is high enough, though, and it has enough upside that I think we should try one or two copies. Also, since we want to play a lot of spells, and we want to be able to control the board and remove creatures early on while we develop our mana base, we will often be able to fill our graveyards with spells. Flooded Strand being reprinted will help us in this department as well, and possibly even a couple copies of Evolving Wilds, since the mana requirements are so stringent.

Despite the fact Narset is one of our bigger threats, we still probably want some board sweeper effects. With Supreme Verdict rotating out with the rest of RTR block, this leaves us with a couple options. The first is Anger of the Gods and the second is End Hostilities. Both have some advantages and some drawbacks. Anger of the Gods is going to be better against the hyper-aggressive decks, but End Hostilities is going to be far better against green decks with cards like Courser of Kruphix and Polukranos. For these reasons, I think we should prefer End Hostilities in the main deck, but almost certainly have access to Anger the Gods in our sideboard. We will probably run into situations where we have to remove our own Narset, but that’s okay, especially if Narset has been able to attack. Also, hopefully we will have planeswalkers survive, still giving us a board presence.

Because our sweeper costs five mana, some acceleration could be useful. Jeskai Banner should accomplish this task fairly reasonably, and also has the upside of being a mana source that we can play off of Narset. The other upside is obviously that when we’re searching for something and have some excess mana, we can cash in the banner to get an additional card.

To round out the deck, we will want some cheap removal spell and card draw. Cards like Divination and Lightning Strike. I’m really looking forward to trying this out, as Howl of the Horde and Narset both look so incredibly fun. This will probably be the first deck I work on, and given the preview cards we’ve seen so far, here is roughly where I’ll start:

What do you guys think? Is there anything that I’ve missed that I definitely should have included? What cards are you most excited for to build around when Khans is released? Let me know in the comments. Happy brewing, and good luck!