In Magic many things are just expected after getting reprints and variations on the same utility cards year after year. In fact, the most noteworthy thing about these cycles is their eventual absence from the game. Such is the life of the four-mana board sweeper spell, starting all the way back with Wrath of God and having a number of variations including Day of Judgment and Damnation.

Recently there were a few articles hinting that R&D wanted to push Standard away from the a four-mana sweeper effect being the norm. While this was interesting to talk about, it’s a pretty big leap to take something out that’s only been excluded from Standard a handful of times in the past decade. Even more so when you take into account the power creep that creatures have gone through in the last 4-5 years. If anything you would expect this change to come after de-powering creatures. Nowadays we have 2/1s for one with upside abilities, 3/3s for two with upside, and a multitude of 3-to-5-power drops at the three slot with all sort of goodies.

Instead they took the plunge and now we have our sweeper effect for the new environment, End Hostilities. 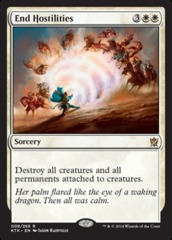 First off, I really like the overall flavor of the card and how it’s portrayed. It feels like someone was watching Avatar, the Last Airbender or Korra when they came up with the art and flavor text for this card. It fits the world of that show pretty much dead on and is a nice stylistic change from the normal “kill em dead” pictures we usually get for wrath effects. Since there’s good odds we’ll be seeing a whole lot of End Hostilities , that’s a nice plus.

Notably while they did kick the mana cost up by one on the normal Wrath of God effect, they did add a relevant bit of text to the card. By allowing it to hit things attached to creatures, it helps keep bestow creatures and any future equipment in check. I would be very surprised if we didn’t have any Standard-playable equipment during this block now that another hurdle has been thrown in.

Still it’s five mana, which means control will have to pack more answers to the very fast aggro decks that already exist. While the copious amounts of removal has kept many aggressive plans at bay, heroic strategies and black aggro are both very scary goldfish decks in Block. Being at five mana also gives the best three-drops some time to shine or untap with relevant tricks or countermagic before you can cast a sweeper. Brimaz may have never really seen the spotlight in Standard, but Supreme Verdict being gone makes the card way more intriguing.

Remember when I discussed how investment cards and incremental advantages get better when rotation happens? This is a prime example of why. Goblin Rabblemaster, a card already seeing play, gets even more time to build an army and attack before sweepers are even an issue. Creatures like Fanatic of Xenagos, Fabled Hero and Prophetic Flamespeaker all have at least a turn or two to actually accomplish something! While this card still helps keep these cards in check without being forced to runs oodles of spot removal, it also gives them enough time to pay for themselves instead of being forced entirely out of the metagame.

Let’s be clear though, the most relevant thing is that we now have a playable sweeper that hits all creatures. Considering how dominated the Block format was by the green power duo of Sylvan Caryatid and Courser of Kruphix and how limited we were in terms of mass removal, lack of a relevant Wrath could’ve locked us into endless months of green shells. Instead now Control gains a very real reason to go white (Besides Elspeth) and midrange decks can’t have free reign over the battlefield while only dealing with one for one removal. While Fated Retribution, Mass Calcify and Perilous Vault exist, their massive mana investments render them mostly unplayable in any normal strategy.

What this also does it give both aggro plans and three mana heavy hitters a bit more breathing room. Considering how the deck was stacked against them as the current sweepers available in Drown in Sorrow and Anger of the Gods are aimed squarely at them and not at four toughness creatures, it meant you had to be very careful with how the deck played the metagame. Instead now control decks don’t need to lean on these maindeck and instead will be playing more spot removal and End Hostilities to deal with both camps of creature deck. This gives more play and more time for the aggro players and means the green decks have to actually respect decks being able to clear out their board presence once they get settled.

For example, Bant Control will likely want to use some number of End Hostilities , but also doesn’t want to jam a million since it’s best options are also the green core of the midrange decks. Meanwhile American Control can ignore that and go to town jamming a million removal spells and an actual engine via Keranos, God of Storms.

Despite the first inclination people had which was that Prognostic Sphinx got even weaker, I feel like it mostly ended up as a wash. Prognostic Sphinx remains one of the few threats that isn’t hit by Elspeth, Banishing Light, black removal and can block both Stormbreath Dragon and Sarkhan, the Dragonspeaker. Considering how scary the latter looks to be against the average controlling build unless it’s immediately dealt with, having additional ways to pressure him and block giant red dragons seems appropriate. Narset, Enlightened Master looks very cool though and is one of the intriguing possibilities for a non-planeswalker engine card.

Playing this set of colors gives solid answers to pretty much anything the opponent can throw at you. Just having access to a major sweeper can allow you to really plot out your turns effectively and setup your follow up engine play without nearly as much risk. Of course if you’re willing to ignore Keranos as an engine, then you can easily play Esper which gives you a mana base upgrade, Thoughtseize and spot removal upgrades with Hero’s Downfall and Silence the Believers.

The sideboard is likely too cute, though I do like the idea of playing a control deck that can take advantage of white’s Broodmate Dragon in matches where you can’t necessarily sit back for the entire game. Otherwise the usual stipulations apply, not knowing all the cards from Khans makes the removal package a tough sell and I have no idea how many Ashiok is correct. I feel like people will underplay Elspeth, Sun’s Champion in the new format just because we’ve seen a number of threats that can kill her quickly while avoiding tokens. She’s still one of the absolute best things you can do at six mana, so until proven otherwise I’m jamming at least three in all my control shells.

I’m excited for a format without a four mana sweeper and at the same time, happy with the one we received. This was aggro decks have a better shot while Courser / Caryatid decks have a reasonable countermeasure. Next week we’ll be taking a look at decks that aren’t so focused around ending the hostilities and instead want to start some.