In just one month, we’ve gone from fearing the apocalypse that would be brought about by Artifact, to paving our own path in the esports world. And it’s all thanks to Arena.

I’m ecstatic that Arena has been such a huge success. For people like me who are geographically isolated from traditional competitive Magic, online avenues are our best chance at success. Arena and the new esports ventures are answers to prayers most of us have had for many years.

Welcome to the future.

This past month has been all about the ladder grind on Arena. And with the ladder, we were introduced to the best-of-one format. Personally, I was happy to hear that this was happening and even after playing non-stop this month, I’m still loving it. Best-of-one calls for us to build decks differently and assess Standard from an unconventional perspective. This format is going to challenge us to think within parameters that we’ve never really experienced as Magic players.

When it was announced as the ranked format for Magic Arena, I initially approached it as someone who had played a significant amount of Hearthstone. The experience I had not only shaped how I approached deckbuilding, but also how I managed the resources available to me. In Arena, if you use a wild card, for now at least, you’re stuck with it. For me, this meant that I did a significant amount of planning before deciding on the deck(s) I wanted to build. If you’re just getting started, I recommend thinking about what you can build before using any wild cards.

Now, when it comes to deckbuilding, I’m no brewer. And building entire decks is not my forte. Instead, my strengths lie in refining lists and determining the best way to attack a format.

With Arena introducing a card availability conundrum, I decided to get creative and analytical about my approach.

I started by looking at existing decks in Standard as a 75 and noted their strengths and weaknesses in the current field. There are decks in Magic that purely exist as “sideboard” decks. This means that they offer a strong game 1, but the true power comes from a versatile sideboard that allows them to adapt their game plan against the other relevant decks in the format. So by looking at a deck as a whole, I felt that I was truly able to analyze why it was winning and how heavily it relied on its sideboard to do so.

One of the things I then had to consider was how to approach the ranked grind. Traditionally, the idea is to play as many games as possible. For this reason, I elected to stick to an aggressive strategy for the first segment of my ranked journey.

You don’t have to play an aggressive deck, but you probably should. As long as you are comfortable piloting an aggressive strategy, I would highly recommend using it to take you from the pits of bronze to platinum. If you don’t feel comfortable playing aggressive decks, you should consider this before using wild cards to go down this line.

Your wins and losses don’t mean very much between bronze to platinum. It is definitely a numbers game and playing as many games as possible is the strategy I recommend. Aggressive decks tend to know whether they are winning or losing a game fairly quickly. And since entry to ranked games is free, you should prioritize your win-rate-to-time ratio. You’re not losing anything but valuable grind time by faffing about in unwinnable games.

I think that learning to concede is not a trait that comes easily to Magic players. We’re used to 50-minute rounds and we play to our outs. But knowing when to concede is a key factor to consider on your journey to mythic. You are no longer trying to see more cards to gain an advantage while sideboarding, so you only have this one game to win or lose. You don’t want to waste any more time than you need to. If I had my clapping emojis this would be a little more emphatic, but don’t waste time on games that you are clearly losing!

The next step was to take these ideas and work out the most profitable ladder deck for this theory. I landed on U/R Drakes.

If you, like me, started your deck building process with a regular 75-card deck, you should adjust the main deck before playing any ranked games. There is a difference between what is suitable for each format, because they are different formats. By registering a regular Standard deck in best-of-one, you risk falling behind to opponents who show up with pre-boarded decks.

This was the list that I used to go from bronze to platinum:

I chose this deck because I felt it was the perfect combination of being aggressive while having potential late game. I also believe it has the greatest capability to capitalize on bullets.

In Magic, bullets are single cards included in deck lists. They are often narrow and particular, targeting certain strategies. In exchange for the power they have in certain matchups, these cards are pretty dead the rest of the time.

In this deck, Dive Down, Fiery Cannonade and Niv-Mizzet, Parun are the bullets I elected to include.

I think that the inclusion of these cards is effectively a freeroll. Not only does the deck see a lot of cards, but it’s also full of ways to discard cards, so if a card isn’t relevant there are ways to cycle through it.

In the scope of the format as a whole, some cards make great additions to a deck and others are more difficult to include and could warp the deck. In general, the more disruptive a change, the less likely it is you should be making it. The idea of my bullets is for them to benefit the deck without being a detriment. 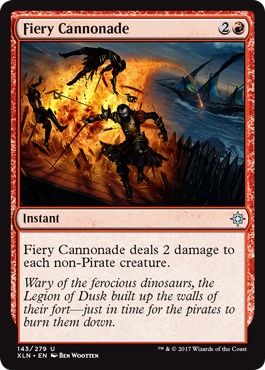 Above, I described the addition of Fiery Cannonade to U/R Drakes as “free.” For comparison’s sake, an ineffective use of this theory would be mono-red adding Lava Coil to its main deck configuration. In this instance, Lava Coil is bad against control and Nexus of Fate decks. It hamstrings Experimental Frenzy, which is the engine the deck is built around, and you have no way to cycle through it. The upside of playing it would be to effectively deal with a Rekindling Phoenix or occasionally a Wildgrowth Walker. You are losing more than you gain, which makes it a pernicious inclusion.

Thinking about this theory in detail was the main reason I ruled out Jeskai Control as the deck to play. The rationale behind this is that if you create a build tuned to beat creature decks, you are likely losing the mirror and potentially other grindy matchups. But if you build to beat those decks, you are likely losing to creature decks. Anything in the middle, and I’m not exactly sure that you’re beating anything.

For this reason, I don’t believe it’s wise to be join ranked games with a control deck until you reach late diamond or mythic. This thinking calls to the origin of why control exists within formats. A control deck is there to answer questions, but there is a prodigious variety of questions being asked in the current Standard format. Without access to a sideboard, it is difficult to have all the required answers while maintaining a functioning deck.

If you’re still hellbent on registering Jeskai Control, here’s my take on what it should look like in best-of-one:

This list is skewed toward beating creature decks, with some late game for the control decks.

The final reason I’d wait until the later stages to play control is because you will typically face fewer rogue strategies, and have the ability to form 60 cards worth of carefully chosen answers.

As you reach these higher tiers, each game will matter more. And so you are no longer grinding quantity, but rather you want to be putting more effort into each game, with the emphasis being on winning. It becomes more feasible to register the best decks in the format, as opposed to the best strategy to climb through ranks.

If I had infinite time and courteous opponents, I would be playing a Nexus of Fate deck. Nexus of Fate benefits from the best-of-one format the most. These decks traditionally have no creatures, limited interaction, and a powerful engine that is usually broken by sideboard cards. And since we don’t have sideboards, they remain difficult to exploit.

I switched to a Nexus of Fate strategy when I was stalled in platinum because it was becoming too difficult to consistently win games with U/R Drakes. It was a slower process, but my win-rate overall was increasing, which is the theory to apply to the higher ranks.

I’ve really enjoyed playing Arena so far. I think it’s wonderful that we finally have a smooth running program and it has brought a lot of fun back into Magic for me.

That being said, if you’re newer to the experience of spending hours clicking and dragging things on a screen, it’s not easy and building up your endurance is something that takes time.

As someone who has spent a lot of time grinding various games from the comforts of a computer chair, here are some tips that I’ve come up with:

This really extends to Magic as a whole. If you’re playing out of obligation to the grind and not because you want to be, you’re going to burn out. Sometimes it’s correct to push yourself to play. But if you really don’t want to be playing, you don’t have to be. Your mental health needs to come first, or none of this matters.

And if grinding is your full-time gig, then I recommend having some structure. Have set start times for your day. Developing a schedule is key to having some normality here. Do some exercise a few times a week and really remember to take care of yourself.

Overall, I’m really happy that Arena has been a huge success. It’s given the best game in the world the opportunity to break into esports. For the first time in a while, I’m excited for the future of Magic and what it means for all of us.

Best of luck in the grind!

Jessica started playing around Born of the Gods and has enjoyed competitive Magic for a couple of years. She was a Team GP Sydney winner in 2018, enjoys travelling to GPs, and can often be found playing MTGO. She'll play any Constructed format and has a soft spot for Cube.