Proliferate is a powerful mechanic. Adding the right counters across a number of permanents can swing a game. Throne of Geth is a great fit in the Modern Hardened Scales Affinity deck, as you can get multiple uses out of sacrificing artifacts to add counters to a swarm of robots who can wield them well. But what about in Legacy, with a deck that has nothing to proliferate on its side of the battlefield and doesn’t have other artifacts? 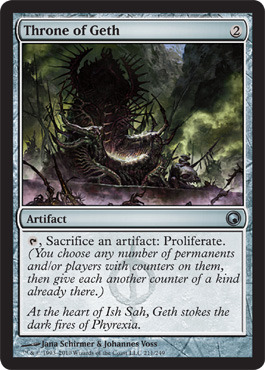 Throne of Geth was the technology used by ChannelFir1eball and testing partners in the Legacy portion of the team Pro Tour in their U/B Death’s Shadow deck. The reasoning? Death’s Shadow is weak to Chalice of the Void, and Throne of Geth is a 2-mana way to get around that potential problem. Is it worth it?

Throne of Geth doesn’t offer much outside of this specific scenario, but the importance there can’t be understated. A typical Legacy Shadow deck runs Brainstorm, Ponder, Delver, Shadow, Fatal Push, Stubborn Denial, Thoughtseize, and Reanimate. This is a massive percentage of the deck and to have that all turned off because a Chalice of the Void slipped into play under Daze or Force of Will isn’t a great place to be.

While Shadow decks have some answers to an early Chalice when they’re on the play thanks to Denials, Daze, and Thoughtseize, it just highlights how hard it can be to win on the draw. Having a clean answer in Throne of Geth can disrupt that.

But that’s not all! Throne of Geth sacrificing itself to proliferate your opponent’s Chalice not only turns on all of your 1-mana spells, but it also turns off their 2-mana spells! While there are a number of different Chalice decks in Legacy and the Red Prison style deck won’t be heavily impacted by a Chalice on 2, the Robot style aggro deck is glutted with 2-drops! Turning off Vault Skirge, Steel Overseer, Arcbound Ravager, and Thorn of Amethyst puts a serious damper in their plans, and a Chalice on 2 will also prevent your opponent from playing a future Chalice on 1. The Aggro Loam decks that might be fighting your game plan with Chalice will now have their Dark Confidants, Punishing Fires, and their Life from the Loams turned off, which should end the game.

So that makes it sound like Throne of Geth is pretty fantastic, right? I’m not so sure. I imagine  most people, upon seeing the deck lists with Throne of Geth, thought this might be more cute than it is good, and over a month later, I still agree with that mindset.

There are other options that aren’t quite as focused as Throne of Geth to deal with Chalice of the Void. For starters, there’s Ratchet Bomb, which also happens to do serious work against a number of decks in Legacy. Engineered Explosives on 0 provides yet another option for cheap ways to get around a Chalice on 1.

Throne was pretty cool for a weekend when nobody was expecting it, but it’s going to be tough to catch people off-guard going forward. For that reason, I prefer the more powerful and versatile options, namely Ratchet Bomb, as my sideboard card of choice.