Pro Tour Hour of Devastation is in the books. Coming into the Pro Tour, we knew that Ramunap Red was the deck to beat—but it didn’t get beaten. With 6 copies in the Top 8 and Paulo Vitor winning the event with our CFB Ice list, it proved to be the boogieman we thought it might be.

At the Pro Tour, there’s a lot to consider when choosing your deck and how to configure it. People will think about having a good matchup versus red, but there was also some hype about the new kid on the block, U/W God Pharaoh’s Gift, which pushed them to configure their decks to have an answer for that, as well as a handful of other decks such as U/R Control, W/U Monument, etc. They may have also assumed that since red was the obvious boogeyman, it would be beaten at the Pro Tour, like Jeskai Saheeli at Pro Tour Kaladesh.

There were a lot of unknown factors heading into the Pro Tour, which helps us understand what happened: people prepared too much for decks other than the ones that actually showed up. An example of this is the deck I played, which is the same one that Sam Pardee used to finish 2nd at the Pro Tour, B/G Delirium Constrictor.

Don’t get me wrong—the deck was good, but we gave too much respect to U/W Gift and U/R Control. With 2 Dissenter’s Deliverance in the main deck, it was awkward to cycle that alongside Traverse the Ulvenwald. You lost too much time against the streamlined aggro decks. The 3 Dispossess in the sideboard together with the overwhelming preparation for U/R Control was too much.

Now that we know the metagame, we can prepare accordingly. So where are we at?

Ramunap Red is still the deck to beat, but it’s getting beaten more and more consistently. The format has slowed down a bit as people gear toward more streamlined midrange decks or other proactive strategies with untapped mana bases that don’t get punished as badly by Red’s good draws, such as Zombies. This means that even with, say, Ramunap Red being around 20% of the metagame, it’s still more important to beat the other decks while having a reasonable matchup against Ramunap Red.

R/G Ramp, a deck that lost one of its three bad matchups, U/R Control, is now only bad against itself and Ramunap Red, and has reemerged to beat the new onslaught of streamlined midrange decks.

With people slowing down to beat red—cutting down on discard and counterspells meant for U/W Gift and U/R Control—Ramp is definitely a force to be reckoned with. My issue with the deck is that it’s not only bad against Ramunap Red, but an inherently flawed strategy. When you have to respect the aggro decks to the extent that you have to play tons of sweepers and removal instead of trying to advance your own game plan, there are a lot of awkward hands. For example: 3 lands, 2 removal spells, a World Breaker, and an Ulamog, the Ceaseless Hunger. It’s a classic issue of a deck trying to do too many things to keep up in a metagame where it doesn’t seem well positioned. But it’s something to think about in building your 75.

With all things considered—trying to beat the midrange mirror as well as having an even-to-good matchup versus Ramunap Red—I decided to either play Mardu or B/G Delirium. Which one I will choose, I haven’t decided at the time of writing, but they definitely have their pros and cons. Let’s start with Mardu.

Mardu has two noticeable upsides that changed with the format transitioning. The first is that Aethersphere Harvester is an excellent card right now. It’s great versus Ramunap Red, with only Abrade killing it, and it dodges all the fast, black removal. Grasp of Darkness and Fatal Push are more popular when the format is proactive and fast. Another reason why Aethersphere Harvester is better now is because it was bad before—don’t get me wrong, it’s a great card, but it’s the reason why Mardu isn’t a huge portion of the metagame anymore, meaning that people won’t have a lot of Release the Gremlins in their sideboards, which was the largest issue for the card before.

The second major reason Mardu is more interesting now is that with more streamlined midrange and Hour of Devastation being less and less played, Gideon, Ally of Zendikar again becomes the menace it once was.

Mardu doesn’t have a stock list right now, and there are a lot of variants going in different directions. The version I was first interested in was Raphael Levy’s from the Pro Tour.

With the addition of blue, you get Glint-Nest Crane and sideboard cards. Glint-Nest Crane is quite a card versus Ramunap Red since it blocks most of the early creatures favorably while advancing your game plan, as well as crewing Aethersphere Harvester. At first, I was impressed. In my first League I went 10-0 in games, 5-0 in matches, and felt over the moon.

But after some more testing, the issues with the deck kept creeping in. The mana base is awkward, even worse than it normally is in Mardu. You had to mulligan a lot of desirable hands. With 12 fastlands in the deck, the deck has some real problems casting Gideon on turn 4, which is one of the big selling points of Mardu. The more midrange decks I played, the less Glint-Nest Crane and it’s small stats performed. Once I started playing against more R/G Ramp, where aggressive 2-drops and Gideon on turn 4 were necessary, I figured out that I didn’t really want the counterspells against the matchup, but discard spells. It was the final nail in the coffin, and it was time to move on.

As I mentioned before, I was missing a lot of the proactive elements from Levy’s list. So I was looking for a better way to also beat G/R Ramp, a proactive plan, and having more untapped mana for a turn-4 Gideon, Ally of Zendikar. Then I saw Frank Karsten’s list aggressive list with Inventor’s Apprentice.

The first thing I changed before trying this list was to cut the Deserts for basics, as well as the Thought-Knot Seers from the sideboard. With so much Ramunap Red in the metagame, I’m not looking to take extra damage from my lands, which also means there are not enough sources to cast Thought-Knot Seer.

The deck was quite good in game 1. The proactive game plan gave me some free wins that punished slow draws. But post-sideboard I had some issues against other midrange decks, especially B/G variants. With such a proactive game plan for game 1, there are too many cards to take out to transition to a controlling game plan in game 2, meaning that I always felt behind post-sideboard. The other issue I came across was that mana, while untapped, had some issues casting Unlicensed Disintegration, since you need a lot of red and white sources for all your 1-drops and Veteran Motorist. Many of my matches came down to an Unlicensed Disintegration that would win the game, but without the mana to cast it. Sure, in the end I got a better matchup with this version against G/R Ramp, but I feel like I lost out a lot against the other midrange decks, which I was looking to beat in the first place. The search had to continue.

In the end, I figured that I wanted more of a classic version of Mardu with a transitional sideboard plan. Sure the deck would be slower and the G/R Ramp matchup would be worse, but that means more slots will go to it in the sideboard. This is the list I would play: 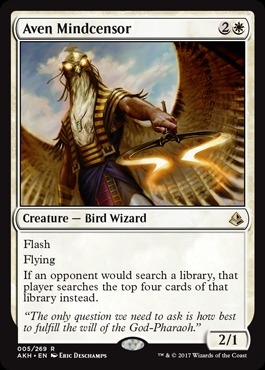 With fewer ways to be as aggressive as the Frank Karsten list, this deck has both Transgress the Mind and the flashy tech card Aven Mindcensor to make up for it against G/R Ramp. The plan instead becomes to slow them down and then punish them with Gideon, Ally of Zendikar. With this version, I feel more comfortable in a midrange mirror, being able to transition completely, while not losing out too much versus Mono-Red in the main deck.

Players shied away from Archangel Avacyn at the Pro Tour, since it can’t protect your creatures from Hour of Devastation. But with U/R Control out the window, you don’t have that issue anymore. The reason I want it over Glorybringer is because of the Zombies and mirror matchup, where Glorybringer would have been slightly better versus different G/B variations. Mardu is interesting because it has some resemblances to Jund. It plays a lot of powerful cards and can punish opponents, while being flexible against aggro decks as a midrange deck. The similarity that is most important however is that it’s flexible in different metagames because you can tune it toward the metagame. It takes a lot of work, but is definitely worth it if you get it right.

The other deck I’m interested in at the moment is G/B Delirium. Why not G/B Energy or G/B Rock? Because in a new world of midrange decks that I want to beat, the format slows down, especially post-sideboard, and that’s where Traverse the Ulvenwald shines. Instead of being a dead card in the late game, it’s insane, especially in the mirror match. I actually believe that the deck I ran at the Pro Tour was a great list and it needs only some minor changes to be better in this metagame. Here’s how I would build it now.

As you can see from what I mentioned earlier, Dispossess and Dissenter’s Deliverance isn’t really needed anymore with the U/W Gift deck falling out of favor. Instead, the version is more apt with Yahenni’s Expertise, a monster of a card versus Zombies, which is picking up in favor and offers another tool versus Ramunap Red.

So which one of these should you choose? Both are fine choices and honestly I’m not sure yet. B/G Delirium is a bit better versus red and has a stronger overall midrange matchup. But it has some real issues—hands are hard to keep sometimes, since not all of your cards line up well versus every matchup. Here’s where Mardu has an upside with a stronger proactive game plan than G/B Delirium. Mardu also has an easier matchup against G/R Ramp, which definitely counts for something. If you’re choosing any of these decks, remember that reps are important to be able to sideboard on the fly and know what hands to keep—skills that are harder with these kind of midrange decks, and that’s where experience comes in handy.