Return to Ravnica was the first set I really started trying to qualify for the Pro Tour. As such, the plane of Ravnica has a real soft spot in my heart. The Ravnica sets have always had a number of build-around cards, and the one that caught my eye from the initial spoilers was Firemind’s Research. 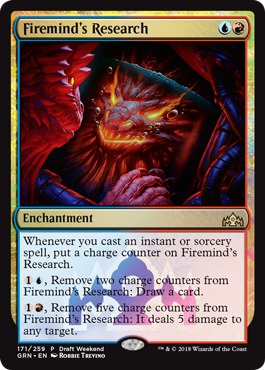 There are a few things that can allow a build-around to succeed, the first of which is lack of main-deck hate. Cast Out and Forsake the Worldly are rotating out with Amonket block, meaning that there will be less enchantment removal lying around for a card like this. Additionally, without the sheer power at the top end (Torrential Gearhulk, The Scarab God, Glorybringer, Chandra, Torch of Defiance, etc.), there’s a hole for how players will transition from the early/midgame to gaining card advantage. Firemind’s Research fills this hole effectively.

For 2 mana, you’re building an Arguel’s Blood Fast, which has proven to be a potent card out of the R/B sideboards and the U/B midrange decks. The upside you get is the ability to not lose life, and the second ability to kill some things at a moment’s notice. You’ll notice that 5 damage is the perfect number to kill Teferi, Hero of Dominaria, Steel Leaf Champion, and potentially your opponent as well. Having your card advantage engine eventually kill the enemy player has already proven itself among the most powerful things you can do (see Teferi and Chandra). And this one also cannot be attacked by creatures.

But you need some spells. Firemind’s Research asks you to put instants and sorceries into your deck, which, if you haven’t noticed, plays perfectly with the Izzet keyword jump-start. You’ll be able to cast each of your spells twice, and with Firemind’s Research, keep your hand full to continue playing powerful spells like Quasiduplicate! Dominaria featured a Wizard subtheme in the Izzet colors. Wizard’s Lightning has already ported over into Standard play, and if there are a couple of additional powerful Wizards to supplement your deck, Wizard’s Retort is a powerful option.

Firemind’s Research is going to depend on the cards around it, but it’s one I’m particularly excited for. There are plenty of powerful instants and sorceries available, and I’m sure the Izzet guild will bring us plenty more. For now, I’ll leave you with two different directions to take Firemind’s Research. Of the cards on the spoiler, it’s the one I’m the most excited to build around!

This list leverages the two powerful enchantments from Dominaria that care about instants and sorceries. Precognition Field allows you to play tons of instants and sorceries, and whenever the top of your deck is not an instant or sorcery, the goal is to reset it with Surveil or Firemind’s Research. The late-game kill can either be through the new Ral, Banefires, or Firemind’s Research.

This list is more of a work in progress, as it will have tons to gain as we get more spoilers. The goal of this deck is to use Firemind’s Research as a secondary engine. The focus is the legendary creatures and planeswalkers package, using the spells alongside them to bridge into the mid- and late game. Unlike the first deck, you’re not looking to use the red ability on Firemind’s Research. Here you’re looking to use the blue ability to dig into the A+B combination of legendary permanent plus legendary sorcery, and apply pressure to your opponents in a different way with an array of exceptionally powerful cards. Because both Dimir and Izzet have cards in this set, this deck will likely gain a ton of different cards in the next few weeks and can even allow for a card like Mox Amber or Narcomoeba to get into the deck if all things pan out well!