Last weekend, I took a step away from Magic to play the World Championships of another card game, Epic. It was a limited, 32-competitor field, and I was able to fight my way all the way to the Top 4. There I ran into last year’s World Champion, John Tatian, who, after defeating me, also defended his title successfully against Sam Black in the finals, losing what I believe is zero matches in back-to-back years. Pretty impressive stuff.

Since Sam and I both did well, he was unable to make his flight home and crashed at my place overnight after rebooking to an early morning flight. We got to talking about Magic some, and most of what we talked about was Iconic Masters.

In the car ride home, we talked briefly about the differences between Iconic Masters and Ixalan, mostly from a design perspective, and specifically about how they were designed for Booster Draft.

When we eventually got back to my place, I opened up a bunch of my Magic Online accounts, and I must have drafted six or seven times with random Play Points I had left over on my older accounts, but we didn’t actually play any of the matches. While I had a few Drafts under my belt already, we were trying to better evaluate how the set drafted.

I’m sure I’m not the only one who has heard people complain about Ixalan Booster Draft. There are a few reasons for that.

The major problem with Ixalan is that shifting between archetypes is just too difficult. It’s difficult to start a Draft with five or six picks of a Vampire deck, realize that Merfolk is the open tribe, try to start over from scratch (scrapping your first five or six picks), in the hopes that the archetype is actually open and that enough cards for the tribe get opened for you to capitalize. In a non-tribal format, you may be drafting a black and white deck, realize green is open and white isn’t, and then move into a G/B deck. The problem in Ixalan is that if you start a Draft with a couple of Vampire payoffs, notice that white isn’t open but you’re seeing some good green Merfolk, your B/G Merfolk Vampire deck isn’t going to fair too well.

The inability to switch becomes even more of a problem because the power level at common is low, so you run a huge risk of ending up without enough playable cards in your deck if you don’t switch immediately.

In Sam’s words, “you put the blinders on a few picks in and force your archetype,” and from that point on you’re not going to look back.

This makes the Ixalan Draft somewhat uninteresting, as it basically boils down to filling out your curve and making sure that you have enough combat tricks to back up your creatures. The decisions after the first few picks just haven’t been that interesting in Ixalan Draft.

Another problem with Ixalan Draft is how the games play out. The format can be extremely aggressive, and it often feels like the first person to lose a combat loses the game. Vampire’s Zeal and Skulduggery are both far better cards than they’d be in a lot of formats because of how huge a tempo boost they provide.

These issues lead to high variance Drafts and games. There are some who believe that the format is more grindy than others—I really think that the games tend to be decided fairly quickly. Even if they aren’t technically over, the game is generally decided in the early combat steps, or early curve outs reducing one player’s life total so low that they can no longer make profitable attacks and are just treading water until they eventually drown.

The last problem is the lack of build-around cards outside of tribal synergies. Outside of drafting a lot of Treasure generators and five colors, there wasn’t anything cool to do except stick to a tribe and go as hard on tribal synergies as possible. Amonkhet Booster Draft was a hyper-aggressive format, but there were still some cool things to do with cycling decks, Gift of Paradise ramp strategies, and even U/R Spells decks. Even when I was losing, I was having fun drafting and playing with these decks. I don’t feel the same way about Ixalan Limited as the games and decks all kind of end up feeling the same.

What Iconic Masters Did Right

Iconic Masters, while not my favorite format yet, is designed extremely well. Archetype-driven cards are often good outside of where they are “supposed to be good” and there’s overlap in archetypes from color to color.

Let me give you some examples.

G/W Counters is a fast aggressive deck in this format, but the “counters matter” theme stretches 3 colors. Green, white, and black all have creatures with +1/+1 counters, and all have some reason to want all of your creatures to have counters to give an added bonus. This allows you to position yourself in these colors in the Draft and pivot between G/W Counters and G/B Counters, or even a B/W Counters deck. Mechanics like renown, unleash, and outlast all provide creatures with counters and cards like Chronicler of Heroes and Inspiring Call provide a payoff outside of just outlast for having creatures with counters. 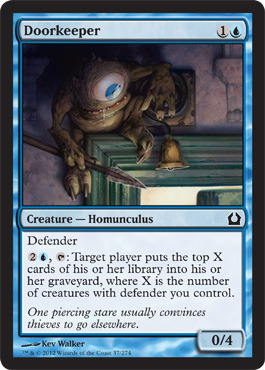 Doorkeeper can play well in a variety of archetypes. While U/B is a mill color combination, with Shriekgeist, Jace’s Phantasm, Balustrade Spy, and Grisly Spectacle, U/G Defenders is also an archetype with Doorkeepers and Assault Formation as a payoff. This again allows you to pivot in the Draft between colors without having to “put the blinders on,” which would typically be the case if you were drafting a mill strategy in Limited. So if you start by taking some mill cards, you’re not really forced into a specific color combination—you can pivot into another combination if necessary. 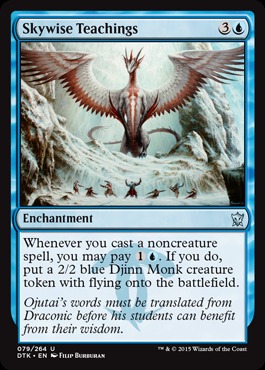 Skywise Teachings was the focal point of my first Iconic Masters deck, and while you’d typically use it in a deck like U/W Prowess, I found another use for it in a multicolor ramp deck, with Search for Tomorrows and the various mana rocks that the format has at common, allowing me to turn my excess ramp spells into 2/2 flying beaters. These are just a couple of examples of how you can use build-around cards in different ways in Iconic Masters because of how well the overlapping mechanics were implemented.

Another example is that rebound cards and suspend cards work with storm cards and prowess. All of these synergies within Iconic Masters really make me appreciate how well the set was designed. Unlike Ixalan, there are several exciting strategies to draft.

The fact that there are a ton of valid archetypes is a huge reason why I enjoy Iconic Masters. I like to play slower and longer games of Limited. I personally like to draft theme decks or decks with inevitability while others like to draft aggressive decks with low curve creatures and play a more tactical game in combat with tricks and removal to push through enough damage to end the game.

Iconic Masters has enough control elements to make it a viable archetype, enough synergy to draft build-around decks, and just enough aggressive strategies to really make drafting enjoyable for people who like all kinds of Magic.

In fact, in Iconic Masters, you can draft color combinations in different ways, which is unique. You can draft a life gain B/W midrange style deck, or you can draft if aggressively, focusing more on counter synergies, and both are perfectly viable. You can draft U/B Mill, U/B Aggro, or even U/B Aggro Mill. Blue-red decks can be focused on cards like Surreal Memoir and Mnemonic Wall with a bunch of permission and removal in a control shell, or they can be a focused Kiln Fiend deck with Elusive Spellfist for some redundancy. Blue-red can also be a defender deck with Doorkeeper and Vent Sentinels. The list of archetypes within various color combinations goes on and on.

Having all of these possibilities for each Draft makes each one unique, and each game unique. That’s what makes drafting the same format over and over fun, and it keeps it fresh. I had a lot of fun drafting Ixalan the first two or three times but I knew by about the third Draft that it was going to get boring quickly. I don’t feel this about Iconic Masters, which will keep me coming back time and time again to explore the different possibilities.

My one criticism of Iconic Masters is that there are a few too many common creatures that don’t seem to play a role within the archetypes of the format. Cards like Sustainer of the Realms, Greater Basilisk, and Earth Elemental just always leave me puzzled in a format as cool as Iconic Masters.

Besides that, I’ve had a lot of fun drafting Iconic Masters, and I recommend it as a nice change of pace from Ixalan.

While it’s easier to overlap synergies when you have years and years of mechanics to choose from, I really hope that sets in the future are designed with some of the concepts that were executed nicely in Iconic Masters in mind. It’s not only important to design color pairs to have a working synergy, but it’s also important to make some of those mechanics overlap nicely so that you can navigate a Draft finding open colors and archetypes and cards that work well together from archetype to archetype instead of being pushed into one color pair or some narrow linear strategy.

I’ve definitely seen mixed reviews of Iconic Masters, but one thing is for certain: It was designed beautifully for Draft and I hope you also appreciate how well done it is.

Do you feel the same way? Do you think I’m overrating Iconic Masters? I’m curious what you all think about the format, so let me know in the comments below.