In just a 6-round event, I turned an opponent’s Insectile Aberration, Trinisphere and Griselbrand all into Elks! While the first one is not that hard to answer, the second two were usually impossible to deal with for Delver decks, whereas I got to steal those games thanks to this new planeswalker.

Delver decks always had their three-drop slot as True-Name Nemesis, but since Plague Engineer I’ve been cutting down on Nemesis.

Brazen Borrower is the card I tried first, but wasn’t quite satisfied. While Brazen Borrower also answers annoying threats, it isn’t as efficient as Oko. The 3/1 body is pretty weak in a format where Wrenn and Six and Plague Engineer are very heavily played.

I think Oko, Thief of Crowns will safely find a home in every UGx deck, from Delver to Snow Control. Oko is the type of efficient planeswalker that Wizards of the Coast likes to push these days, and it will make a wonderful couple together with Wrenn and Six. Unlike Wrenn and Six, which is usually awful against combo decks, Oko is not only playable against combo decks, but it’s also blue, which is a huge deal in a format where 6 Force of Will/Force of Negation is the norm.

Oko is the reason why I decided to go down to 2 Wrenn and Six in my Delver deck. Wrenn and Six is obviously a super-powerful planeswalker, but it being weak against combo makes me afraid to play three copies in the main deck. I think Delver’s main weakness in Game 1 are the combo decks when you draw multiple cards that don’t interact and aren’t blue, which is why I want to reduce them.

This week in the Legacy Premier League, my teammate Javier Dominguez and I faced off with Delver strategies, and while they are both similar we have some small differences that are worth pointing out.

Javier believes in Stifle; I don’t. Stifle is a card I’ve always disliked – it’s bad on the draw and bad if your opponent draws a bunch of lands or you draw too few. It might have been my problem and I might have been genuinely weak at playing with the card, but since the days of Canadian Threshold and Nimble Mongoose I’ve always hated Stifle.

I’m also playing one more color than Javier. There are obvious upsides and downsides to this choice and I want to detail why I prefer adding black as my fourth color. 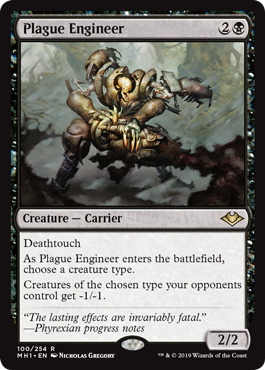 I think Abrupt Decay is the main reason to add black. It’s a removal spell that can let you catch back up in the mirror when on the draw. Killing a Tarmogoyf or a Wrenn and Six on Turn 2 after your opponent used Daze to make sure their card resolves is a pretty common play, letting you “steal” the play. Abrupt Decay also answer things that win the game if unchecked like Blood Moon and Chalice of the Void, although now with Oko, Thief of Crowns you have more room to answer annoying artifacts.

Gurmag Angler is another nice upside. Gurmag Angler is often bigger than Tarmogoyf and it could come down for just one mana in some Wasteland mirrors, where both of you just trade Wastelands for the first turns of the game.

Thoughtseize is in my opinion the best card against Ad Nauseam Tendrils–sure, Stifle is great too, but being proactive and knowing when to have the window to deploy a threat is important. Thoughtseize shines the best in Grixis Delver, and it’s a good sideboard card for any combo deck. I also like it against Stoneforge Mystic.

Last but not least, Plague Engineer is the other black card I love and I miss a lot when playing Temur. This card is incredible versatile and it’s amazing how good it is in a huge format like Legacy, putting in work against decks from Humans to Goblins, from True-Name Nemesis to Empty the Warrens.

Of course, there’s a big downside in adding a color: you’ll get mana-screwed more often. Against a deck with Wasteland, there will be games where you won’t be able to deploy your spells, or you’ll have to choose whether to get Tropical Island to cast Abrupt Decay on Turn 2 or to get Volcanic Island to play Lightning Bolt on Turn 1.

The maneuvering of the manabase requires some prowess and you have to accept that you’ll win some games with your black cards, and you’ll lose some with cards that you can’t cast.

While Wasteland decks are the best in the format, they aren’t the whole story, and against the ones that don’t attack your manabase I love to go Tropical Island–Badlands and be able to cast every single card in my deck without a problem.

Legacy sideboarding is often a collection of 1 and 2-fs, because with 8 cantrips it’s much easier to draw the one card you need.

I think Grafdigger’s Cage is better than Surgical Extraction now that Hogaak, Arisen Necropolis is a big deal in Legacy. In a deck without Snapcaster Mage and with 6 Force of Wills, I don’t think you need desperately three extra free interaction spells to protect yourself against Reanimator.

Also, I’ve often seen ANT players boarding out Ad Nauseam against Delver, making Grafdigger’s Cage a 1-mana kill spell as it shuts off Past in Flames, and even if they do have an Ad Nauseam in their deck, you can put fast pressure on them and make it hard to resolve it properly.

The Crop Rotation package is also one I like a lot. Not only for Karakas and Wasteland–which see plenty of play at this point to answer Dark Depths at instant speed–but I’ve also been liking 1 Bojuka Bog, which serves as double hate piece in just one slot. You can naturally draw your Bojuka Bog and eat their graveyard after a main phase Entomb (which often happens to play around Daze) or a Faithless Looting.

Against combo decks, I like to trim down on Lightning Bolts, Wrenn and Six and some Wastelands, whereas against UW decks I like to cut Wasteland and some number of Dazes.

The mirror is play/draw-dependent, and also Stifle-dependent. On the play, I like to get rid of all the Force of Will and load up with good threats like Plague Engineer, whereas on the draw I want to keep 4 Force of Will to have more ways to answer my opponent’s Wrenn and Six.

If you want to check out some of the Delver content in practice, I encourage you to check twitch.tv/itsjulian to see how the LPL matches panned out!