Earlier this week I wrote an article about some Modern decks that I have tested and ultimately dismissed over the past week of Modern testing. There were a number of decks that I simply didn’t have a chance to get to in the scope of that article, so today I’ll cover the rest of the decks I have tested with.

Sometimes it’s possible to discover that a deck isn’t doing what you want it to do very quickly. There were some decks I tested that I knew were going to be the wrong choice for me within the first match I played. That may seem too fast to dismiss a deck, and saying something like “I went 1-4 with this, so therefore it’s a bad deck” is a flawed way to determine whether or not a deck is good—focusing on record alone ignores variance, player skill, matchups, play mistakes, etc. For any of the decks that I’ve dismissed in this article or the last, I did so because I didn’t like how the cards played together, not because of how many wins or losses I could notch from my computer desk.

To give an example, I went 1-4 with Thopter Gifts and knew it wasn’t the deck for me. I didn’t touch the deck again. I also went 1-4 with Mardu in my first League, and yet I continued to play with Mardu for another five. I had the same record in both cases, but with one deck I felt like there was something there that I could work on and tune, and in the other deck I didn’t find the same number of redeeming qualities and gave up on it.

Let’s jump to the decks.

Mardu was a pet project of mine. I labored over it for a long time in spite of consistently poor results with the deck. Despite losing a lot while testing Mardu, I don’t think it is a bad deck. Many of my losses were due to things that could have been fixed in deckbuilding or due to mistakes I made in game.

I like Mardu more than Jeskai as a shell for Nahiri because I don’t think that countermagic and expensive planeswalkers mix well together. Jeskai is an extremely powerful deck in terms of card quality, but doesn’t have a lot of internal synergy. Many of the cards in the deck play poorly off of each other, like Mana Leak and Path to Exile, or Cryptic Command and Nahiri.

This Mardu deck is lower on power, mainly because it doesn’t get to play cards like Snapcaster Mage, but it has a lot more synergy. Discard spells play well with both Nahiri and Mentor. They clear the way for those cards, provide tokens when Mentor is in play, and Nahiri allows you to cycle through those cards late in the game.

Playing Liliana and Nahiri together felt clunky and there was a lot of tension between those 2 cards. For example, if you play Liliana on turn 3, you don’t want to discard your 4th land or Nahiri, and it really restricts your options of what to do when you use the +1. Mentor into Nahiri felt a lot stronger.

And here is a list that made Top 4 of the recent SCG Open in the hands of Daniel Hendrickson:

Nahiri did a lot of nice things in the deck, including being castable through Blood Moon thanks to Oath of Nissa and being able to then blow up Blood Moon. I’m not sure the Naya deck is stronger than pure RG, though. In fact, I think the list that Daniel Hendrickson played is superior to my own version.

I don’t intend to play this deck at the Grand Prix, but it is a very good deck that I had a high win percentage with. I like how fast and powerful this deck is. Interestingly enough, Primeval Titan was generally better than Emrakul to put into play with Through the Breach, even on something like turn 4. I tried a version that played a few copies of Emrakul. I quickly removed them once I realized that Primeval Titan was just better in basically every conceivable way. I would rather play more Summoner’s Pacts and have more Primeval Titans.

Things to note: Try to get as many Mountains in play as you can early. This means sometimes fetching for Stomping Ground on turn 1 instead of Forest. A fairly common play pattern is to cast Through the Breach with 5 lands in play. After the first search with Primeval Titan, you want to make sure that you have 2 Valakuts and no fewer than 4 Mountains in play, so that when you swing with Primeval Titan, you can find 2 Mountains and deal 12 damage. Often, this damage combined with the 6 combat damage Primeval Titan deals is lethal because some decks start the game at 14 life from fetchlands and shocklands. I had a few turn-3 kills. Turn-1 Search for Tomorrow. Turn-2 Sakura-Tribe Elder or Farseek. Turn-3 Through the Breach -> Primeval Titan. Thanks for playing.

I won more with this deck than any other deck. I went 5-0, 4-1, 4-1 in my first 3 Leagues with it, and the deck felt great doing so. This is a deck I am leaning most toward playing at the GP. 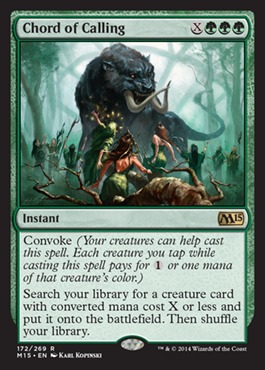 Abzan CoCo has great card advantage—it can combo quickly to gain infinite life or deal infinite damage, it can grind well, it has an alternate beatdown plan that is effective, especially with Gavony Township, and it has the ability to find the right answers to various situations thanks to a toolbox of creatures alongside Chord of Calling and Collected Company.

I have a few fears when it comes to Abzan CoCo. For one, I think the Affinity matchup is a little too close. Perhaps there should be more copies of Stony Silence or a Kataki in the sideboard. Tron is a very poor matchup. I believe that Tron vs. Abzan CoCo is one of the most lopsided matches in Modern, and Tron is a deck on the uptick right now. Tron is well-positioned against a lot of decks and it has had a lot of very good results on Magic Online recently. Tron has been going 5-0 in a lot of leagues. That scares me. Zero Abzan CoCo decks made Day 2 of the last SCG Open, yet Tron was the most played Day 2 archetype at 10 copies. I smell a correlation.

I also think that the Jeskai Nahiri decks are favored against Abzan CoCo. I was beating Abzan CoCo with those decks when I was testing Jeskai, and I’ve been losing to them from the Abzan CoCo side. Jeskai has access to Anger of the Gods and Supreme Verdict to keep the board clear, and the CoCo deck has to overextend into them in order to be able to pressure Nahiri. Jeskai can now also beat infinite life by looping Emrakul to keep the board clear while waiting for CoCo to eventually mill out. Emrakul prevents Jeskai from milling out first.

I also have to imagine these Primeval Titan decks aren’t good matchups. Anger of the Gods and Primeval Titan have never been a good mix for Kitchen Finks.

At heart, I’m still a little kid. I like casting mana creatures and then playing big creatures up the curve and going to town on my opponent’s life total.

I don’t think this deck is the best deck in the format, but it’s one I am considering for the GP because it is simply my favorite deck to play. I love the sideboard, which is chock full of some of the best “screw you” cards in the format. I might need to slip a few Worship in there just to really embrace it.

Anafenza is really good in Modern. She dodges Lightning Bolt and she messes with a lot of things, including the Abzan CoCo combo, Grishoalbrand, the Dredge decks, Living End, Arcbound Ravager, etc. She also hits really hard and ends the game pretty fast, especially when backed up by Siege Rhinos. Turn-2 Ananfenza, turn-3 Siege Rhino. Sweet dreams are made of this.

This deck is quite loose to combo. Gotta hope to dodge, or hope to steal game 1.

Todd Stevens got 11th place at the most recent SCG Open with this deck. I must say, it looked bad to me on paper, but I’ve played some with it and now I actually think the deck is quite good. I’ve been winning a good deal with it and this is just a rough version of the deck.

Tarmogoyf is pretty mediocre in this list. It’s frequently a 2/3. The sideboard feels like it could be optimized a lot from where it is right now. Despite that, I think this deck has a very high power level, and with the right tweaks could be a dominant force. This is a deck I am definitely considering.

That’s all I got in terms of testing. Before I close this article, I want to very briefly hit on some decks that I didn’t test but that I think are big players in the format.