Modern Horizons has hit the scene and it is already making its presence felt. Aided by the power vacuum created by the absence of Daze, Gitaxian Probe, and Gush, the latest set has provided Pauper with a plethora of playable cards. Considering the power level of Modern Horizons, this makes sense. The set was designed to have an impact on a non-rotating format. While Modern has certainly crossed that bridge, Pauper is not far behind. Here are how some decks are adjusting.

Delver variants looked to be the hardest hit by the recent bans. The loss of Daze means that tapping out early is a real cost and the absence of Gush makes it harder for these decks to refuel in the late game. Still, we’re talking about blue decks, so they made out alright. Faerie Seer has given these strategies a boost. A one-drop that makes Spellstutter Sprite better while also enabling Ninja of the Deep Hours is just what the deck needed in the new environment.

Delver decks have never wanted for card draw options. Ninja of the Deep Hours was the standard for so long and it has returned to a place of prominence. Once the cards start flowing, it becomes that much easier to stay ahead of the opponent.

This is enough card advantage for the mono-blue version, but Izzet Delver? It needs the help of Accumulated Knowledge. Izzet Delver has fewer cards that are useful in every situation. Compare Skred to Mutagenic Growth–the former is great against creatures but has trouble dealing the final few points. Mutagenic Growth can help protect a threat, win combat, or deal the final few points of damage. Delver can get by on just drawing cards, but Izzet Delver needs to see more cards to find the right one in a given situation.

Elves was already a competitive option. Even before the deck got Lead the Stampede in Iconic Masters, the “little green army that could” was able to reload with the help of Distant Melody (aided by Birchlore Rangers). Lead the Stampede looks at five cards whereas Winding Way looks at four (at a one mana discount). Being able to bin useless lands is a small benefit but does matter if the deck also has Sylvan Ranger since any reshuffle has a decreased chance of putting lands back into the mix.

That was not the case with this version. Not only did the pilot eschew Sylvan Ranger, they took a unique approach to crafting a sideboard to ensure that their copies of Winding Way and Lead the Stampede could find high-impact cards in games two and three. This comes with some concessions, such as running three copies of Viridian Longbow main and losing out on Spidersilk Armor. There is a piece of neat tech here in the addition of Ivy Lane Denizen to fight Electrickery.

The card I have had the most fun with as of late is Defile. Mono-Black Control has been reinvigorated thanks to the new removal spell. The biggest problem with running a black-based board control deck as of late was the lack of impact in early game removal spells at all points in the game. Disfigure and Dead Weight are fantastic cards early but lose some luster late, especially compared to Lightning Bolt and Skred. Defile helps to patch this hole by being a good answer early and a better one as the game goes on. Black decks need to lean on Chainer’s Edict in attrition fights and Defile can help pick off threats of all sizes and set up Edict to handle something harder to kill like a Guardian of the Guildpact.

Defile does make a big ask during deck construction. Like Tendrils of Corruption, Defile wants you to run Swamps. Mono-Black Control decks have often run Bojuka Bog and Barren Moor to get extra value out of land slots. More recently these decks have adopted Dimir Aqueduct and Dismal Backwater to help with a Dimir Guildmage “splash,” but that flies in the face of an effective Defile. I tried to bridge the gap by adopting Arcum’s Astrolabe. The one-drop allows Mono-Black to run a high number of untapped Swamps while enabling both halves of Dimir Guildmage. It also gives the deck a decent one drop to boot.

This card is showing up everywhere. Its natural home is in Glint Hawk decks, but it has also shown up in various Tron decks. While I anticipated that Boros Monarch decks would adopt the trinket, I thought that Tron was a mana base too far. Turns out I was wrong as the value of an additional one-mana filter that helps you cast your spells is worth running a large number of Snow-Covered basic lands. In both Boros and Tron, Arcum’s Astrolabe provides a cheaper Prophetic Prism and allows these decks to run additional copies of a key card.

Other decks lean far harder on Arcum’s Astrolabe. Using the filter to facilitate splashes in a dedicated two-color deck make sense. Turning it into an integral part of your mana base comes with some additional risk. While it may not be as popular as it was, Spellstutter Sprite exists and is quite good at stopping Arcum’s Astrolabe. I could also easily see cards like Tin-Street Hooligan, Qasali Pridemage, and Hearth Kami all making their presence felt if Astrolabe continues to see such heavy play.

The last card I want to talk about is Weather the Storm. 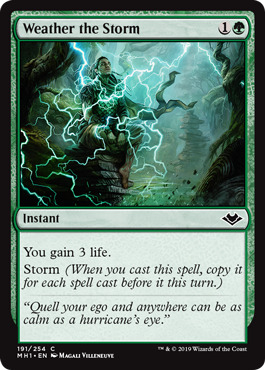 A purely defensive card, the latest Storm spell is quite good at shutting down aggressive strategies. The scales are already weighted against beating down in Pauper due to the abundance of removal, excellent blockers, and damage prevention effects. It used to be that one way to get around these was to attack a life total directly via burn or life loss effects. Weather the Storm shuts that down in the midgame. The chance to buy three or more turns of time for the bargain bin price of 1G has made life that much harder for aggressive strategies.

Still, Weather the Storm is at its best late in the game where it represents more than nine life. Despite being all over the Top 16 of the June 16 Challenge, Red Deck Wins managed to make it to the finals. Red Deck Wins has a consistent four-turn clock, which seems like a solid barometer of what you need these days to race Weather the Storm.

It feels like we have barely adjusted to the new metagame and already we are getting ready for Core Set 2020. If War of the Spark is any indication, we should get a few high-impact cards in the next release. And there’s still so much exploring to be done with Modern Horizons. The next few months should be an interesting time to watch decks develop in Pauper.