The team worked well together and each member excelled in an area where another might be weak. We ended up brewing a lot but the more focused players made sure we met deadlines and didn’t waste valuable time on fruitless projects.

After each PT, we analyze how we operate and how we can continue to improve testing efficiency, so I’m looking forward to the next Pro Tour when we’ll have the opportunity to perform even better.

The plan was to meet a week before GP Madison at Josh McClain’s place in Iowa City after working on Draft in our home towns. I got to work with Nathan and Sam in Berkeley with some of the MagicTraders team, while the rest of the team was doing intense draft practice in Madison.

Both groups came to some similar conclusions independently. We thought that devoid was among the better strategies in the format, and that you didn’t want to end up in green without a good reason.

I still think that green and white are at the bottom of the barrel when it comes to draft colors, but they are playable, especially when the green and white archetypes are open, and you can wheel good early picks.

Ultimately synergy is the most important concept while drafting Battle for Zendikar and if you are just drafting a pile of good cards it can be difficult to 3-0. That being said, there are still some underappreciated vanilla creatures that will help any deck but aren’t picked up quickly because everyone is so focused on drafting synergy cards. Namely Cloud Manta, Wave-Wing Elemental, and Giant Mantis. 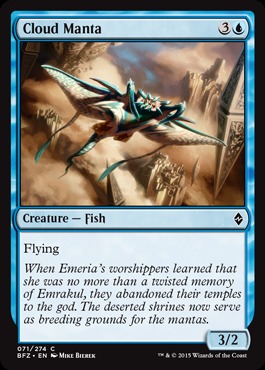 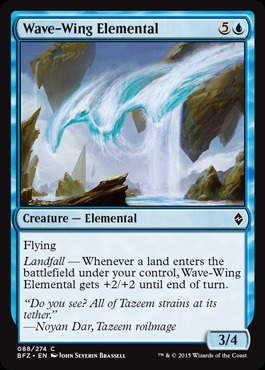 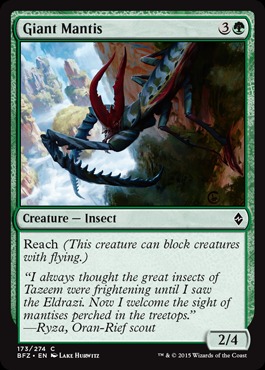 After testing Limited together we jumped into Constructed, which looked incredibly open because of the flexibility of the new mana. Full-on 4- and 5-color decks were viable options, though getting them to work without all their lands coming into play tapped was tricky.

The key was to base your deck in enemy colors and then splash the other colors. For example, Dark Jeskai has a WR base and can cast either Crackling Doom or Mantis Rider off Sunken Hollow. Using this idea, I tried some options like a UR prowess deck that used Magmatic Insight in conjunction with Treasure Cruise to keep refueling while attacking with medium-sized creatures.

Unfortunately, once you were fetching for 2 colors, you might as well be playing 3 or 4. I had to play Bloodstained Mire as a UR dual land since it can get both Sunken Hollow and Mountain, but at that point why am I not also playing black? This is part of the reason why the only successful 2-color decks we’ve seen have been allied colored. The mana in Atarka Red and GW Megamorph is incredibly consistent and almost always enters the battlefield untapped, while enemy-fetching in a 2-color pair is very awkward.

Meanwhile Sam was working on a WB midrange deck that used the power of efficient creatures and Gideon backed by Shambling Vent and Quarantine Field. The deck ended up a bit short on power, but allowed us to look at different options, rather than just decks that play the best threat in 3-4 colors like Abzan, Jeskai, and the Bring to Light variants.

Sam’s deck avoided the awkward mana in 2 colors because he had access to Shambling Vent, and he was less worried about curving out. At the same time, there just aren’t quite enough good cards in 2 colors with so few sets in Standard.

Shuhei really liked Esper, and even though many of us weren’t in love with the Dragons, the deck still had a great suite of permission and threats, and looked to be a frontrunner for the PT. Ojutai seemed like it would be even better now with Elspeth, Sun’s Champion rotating, but in reality more decks could play Crackling Doom, and Stasis Snare even prevented Valorous Stance from protecting Ojutai.

Stance also seemed to lose some power because many of the new decks went around it completely. Red doesn’t care about it except when it casts Become Immense, GW has small creatures, and it matches up poorly against Wingmate Roc. Jeskai likes to go small as well, and outside of killing Tasigur, the Golden Fang or the occasional Butcher of the Horde I can’t really see wanting to cast Valorous Stance as much anymore.

At this point, about a week into testing, we had all the baseline stock decks and tried a bunch of crazy strategies including ramp decks, megamorph decks with extra colors, slower Abzan, UB control with a ton of discard, and more. The problem was that all these decks ended up just being bad, or at best just worse versions of stock decks.

The most potentially broken strategy looked to be Aristocrat variants abusing Rally the Ancestors. The problem was that Anafenza, the Foremost is just so easy to cast, and the Rally decks couldn’t deal with a turn-3 Anafenza unless they drew one of their 4-6 removal spells. Alex’s 5-Color Zoo deck with Anafenza, Mantis Rider, and Savage Knuckleblade was promising but awkward. Even a 5-color deck could easily cast Anafenza and at that point we hung up all hopes of Rallying at the PT .

After trying countless lists that all met horrible ends, the team needed to seriously start thinking about what deck to play because we only had a few days left before the event.

Red was crushing everything pre-board throughout our testing, but that was to be expected. Red always gets worse post-board, and I figured this time would be no different. But then we started playing more sideboard games—and Red kept winning.

Arashin Cleric was clearly not the way to attack the deck, especially when it could easily deal 20 burst damage through the Temur Battle Rage and Become Immense combo. Surge of Righteousness became the go-to answer, but it was only good enough when the deck casting it wasn’t under early pressure—otherwise they needed to expend Surge to prevent damage early and the combo would still be good enough. At this point it looked like we had found our PT deck. Most of the team decided on Red.

Many of us jumped on Magic Online to practice, since it wasn’t like the red deck was any secret and this was the best way to get a ton of matches under our belt. The problem was that we started losing. A lot.

Suddenly everyone was ready for Red—no one wanted to lose to it. Sure, a few sideboard cards weren’t enough to keep the deck from dominating in our testing, but players online were packing up to 8 sideboard cards against it. I began to worry, as I didn’t think the deck was even that resilient before, and this was the point at which Mike and Alex asked what a Narset Esper deck would look like.

I liked Esper before but didn’t like the Dragons, and I prefer a good control deck to watching the world burn, so I built an Esper deck with no creatures in the main and 4 Jaces in the board. The deck was performing pretty well, and I suddenly had a choice on my hands: Do I play a promising but untuned Esper deck, or play Mono-Red and hope the field doesn’t end up being too hostile?

Luckily, I had one day left to tune Esper and had Red as a plan B.

I tested Esper against Red, GW, and Abzan over the next day and thought a lot about Jeskai. The problem was that I hadn’t actually tuned all the numbers and practiced enough to be confident that my list would work against all these archetypes and the other control strategies.

I knew at this point I would probably be in the 45%-60% range with Red, whereas Esper was an unknown.

I think with a tuned Esper deck I could beat out my predictions for Red, but I wasn’t at that point. I debated, and thought, and wondered, and ultimately had no idea what to do. It was the night before the Pro Tour and I felt like both my options were bad. I’ve never been undecided for so long leading up to Day 1, but I’ve also locked in bad decks too early in the past, so this wasn’t necessarily the end of the world either.

I eventually settled on Esper. It had tested well against the matches we had tuned it against, and the numbers made sense to me. Tyler also thought the deck was very good and was going to play it, which was validating.

Flash-forward to the tournament, and I’m 0-3 after draft and feeling pretty down. I thought my draft deck was good, but sometimes things just don’t go your way. I said to my team, “I’m glad I chose to play Esper because now I can possibly 5-0 or just lose horribly and be out of the tournament.” Unfortunately, I was wrong, and exited the tournament after a 2-2 record in Constructed. I got caught up in a home-run opportunity to play something that was potentially very good but also had the chance to just crash and burn. In reality, a deck is rarely either a 10-0 deck or 0-10 deck. Magic games are actually much closer than that, and almost any deck’s percentage will be closer to 50-50 than either extreme. I felt like I was always working uphill with my deck because it wasn’t the best version I could build, and it was just less powerful than what my opponents were doing.

I should have played Red, even though I still think Esper was a reasonable deck. By choosing Esper, I opened myself up to unnecessary risk. I had the opportunity to play a deck I had practiced with throughout testing, and even if Mono-Red was close to a 50% deck it didn’t mean the deck couldn’t win a lot. Paulo proved that with his Top 8, and I’ll just need to stick to my guns in the future.

Practice and experience go a long way especially in a format where most of the decks are well known. No one really broke Standard at this Pro Tour, and playing a deck optimally is the most important thing in such a format. Standard now feels a lot like Modern in that way, and I think players who have tuned versions of a deck they’re experienced with will have the best results in the coming Standard season.

As for the Esper deck, I really liked what it was doing and I think some elements of the Ultra PRO Esper deck could be incorporated into my version to create a lean mean killing machine.

Another card I want to try is Silumgar’s Command. Gideon, Ally of Zendikar was consistently a problem for me, and I’m particularly interested in setting up a Narset -2 ability into Silumgar’s Command to prevent the opponent from slamming a bunch of threats on the table.

If nothing else, this Pro Tour was a good learning experience, and I’m happy to have worked once again with an incredible team, knowing there are more good things to come. Hopefully at the next PT we can put even more people into the Top 8!

[Editor’s Note: This article originally left out 4 Surge of Righteousness from the Esper Narset sideboard.]