I like this little beater. It hits for 2 while crushing 1-toughness blockers, and stacks nicely with pump effects. It also comes out of the graveyard as an 8-power attacker, offering a huge threat and the possibility of a 2-for-1 without costing a whole lot. It is bad at crewing Vehicles, but I can see white-based aggro decks pouncing on the opportunities this opens up. 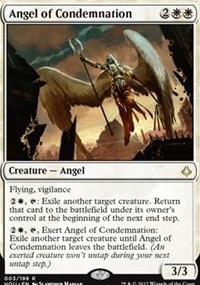 The power level here is high, as this will dominate most boards, but I’m skeptical of any 4-mana creature that dies to removal and leaves nothing behind. I’m not ready to condemn this just yet, but I think it’s more likely that this sees play as a sideboard card for removal-light creature decks than as a main deck staple. 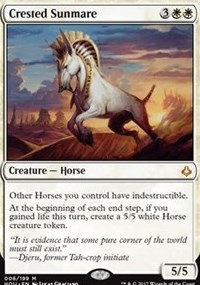 I can’t say I’ve ever seen a Horse build-around before, but this isn’t bad. If you have some cheap or free ways to gain life, this can grow you an army of 5/5s quickly, and if the opponent has a sweeper this protects the rest of the herd on the way out. Look for ways to get value immediately, and you may have a deck here. Playing Crested Sunmare and gaining life on the same turn is the key. 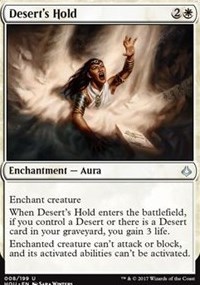 Arrest variants don’t usually make it into Constructed, but I could see this gaining a hold on Standard. 3 life is a real upside, and killing a creature with that bonus attached is well worth 3 mana (does that make this some sort of Licensed Disintegration?). The fact that you have to have Deserts is a sizable deck building cost, but there are enough different ones to choose from that I imagine you could get there. 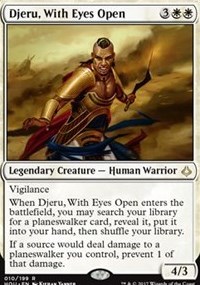 I was always a fan of Thalia’s Lancers, but Djeru looks a bit weaker. Paying 5 mana to go fetch a planeswalker is not as good as just casting said planeswalker, and even the 1 damage reduction effect doesn’t make up for that. A planeswalker toolbox deck could be neat, and this is a 2-for-1, but I think this’ll fall just a little short. 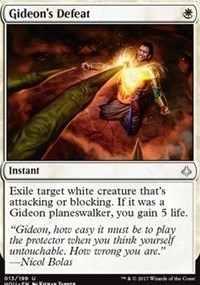 I love the addition of a powerful cycle of sideboard cards. Some of these could even sneak into main decks, though that’s less likely, but either way these are going to be Standard staples. Killing Gideon, Toolcraft Exemplar, Veteran Motorist and more is well worth 1 mana, and just the existence of his Defeat will make Gideon much less likely to attack. 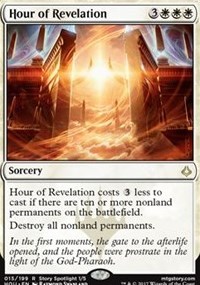 Hour of Revelation looks to be a solid control card that has good applications against planeswalkers and Vehicles, even if it will be cast for 6 mana the vast majority of the time. It’s also a good sideboard option against midrange, even if it doesn’t quite fit in the main deck (depending on how the format shakes out, since 6 mana is a little slow). 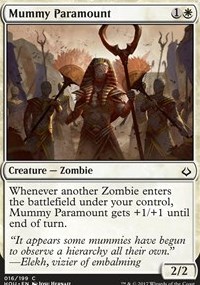 How good this is depends wholly on the strength of B/W Zombies. It can attack as a 3/3 or 4/4 pretty easily, which is great, even if it falls off a little in the late-game. Having good 2-drops is paramount for aggro decks, and this looks like a valuable addition to an already-established archetype. 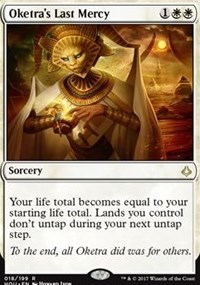 Sideboarding this against Burn decks is interesting, as gaining 10-15 life (or more) is pretty big game. Getting Skullcracked is embarrassing, but if this resolves it should put the game out of reach. I wouldn’t look to play this in Standard, as decks have too many recurring sources of damage, but it’s worth investigating for Modern.

There are a lot of strange interactions with this card, and I wouldn’t be surprised if it popped up in some bizarre Legacy deck or whatnot. It’s less of a sideboard card and more of a way to combo with cards like Dark Depths. 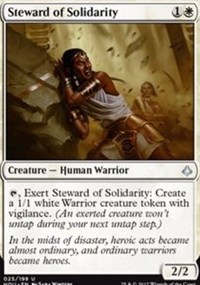 This might be a bit slow, but I have hope that HOU will add something to aggro decks. This goes wide without any additional mana investment, and for a 2-drop, that’s not a bad deal. Combine it with vigilance or untap effects for full value.

Kitchen Finks this is not, but it is a recurring source of life gain and a double threat. It stacks well with power-pumping effects, and looks like a decent sideboard card against aggressive decks.

White didn’t get a ton of action here, but that’s normal for a small set. Picking up a sweeper and two good removal spells is a start, and we might see more white-based control decks as a result.