I was already writing the post-Grand Finals power rankings and had the new Omnath Ramp firmly in 1st place, but then the monday B/R Announcement happened.

Omnath, Locus of Creation is suspended.

What does this mean for the format?

First of all, if you haven’t seen the Historic Omnath Ramp deck in action, I highly suggest you check out this win-and-in match between Autumn Burchett and Patrick Fernandes from the 2020 Season Grand Finals this past weekend.

Somehow, it looked like the players didn’t anticipate a third of the Historic field to be Omnath Ramp, so there was a lot less interaction and Lotus Cobra almost never died. This meant some absolutely crazy turns with Omnath, Escape to the Wilds and Genesis Ultimatum.

The fact that you also have cards like Explore, Growth Spiral and Oracle of Mul Daya in Historic to help you make those extra land drops and cast everything ahead of schedule just easily pushed this deck over the top. 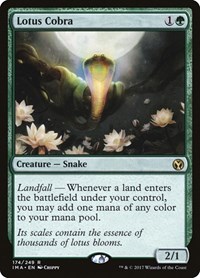 I’m not sure that kills the deck, though. It’s certainly going to be a lot less powerful without Omnath, but the power of Lotus Cobra and Uro, combined with all the extra land drops from Explore and Escape to the Wilds + Genesis Ultimatum is still there. I suspect the deck is still very much playable, it’s just going to be a lot worse against Aggro, now that you can’t gain life back with Omnath. You can use Golos as your “middle of the curve” card instead. 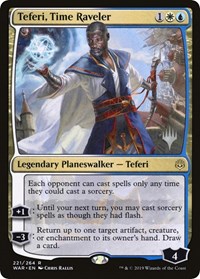 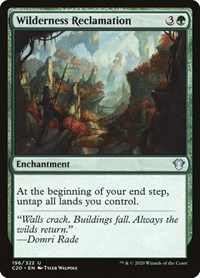 This just moves these cards from the “suspended list” to “banned”. Honestly, to me, this was always the same anyway. If you tell me I can’t play with those cards, it doesn’t matter what is the name of the list they are on. 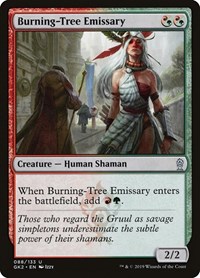 Now we’re talking! Since the addition of Jumpstart, Amonkhet Remastered and Zendikar, the format has gotten a lot faster and more powerful. Cards like Muxus, Thoughtseize and Wrath of God and Collected Company created entirely new archetypes and made previously existing decks a lot better. Wizards feel confident that unbanning BTE is a safe thing to do. As a Gruul Aggro fan, I am happy to see it.

It should make Gruul a little bit faster and make turn-3 Embercleave more reliable. The 2/2 body is often too small to really matter, but the fact that it’s free and makes Embercleave cheaper is really important. It should be an automatic 4-of in the Gruul decks again. Stay tuned for a deck guide soon!

Last week, I wrote an article about how Zendikar changed the Historic format. Make sure you check it out before we deep in the power rankings.

4
Nissa, Who Shakes the World

There was one thing that I missed in my article about the impact of Zendikar on Historic. After Omnath, Yasharn might actually be the second most impactful card of the set.

It does so much in Historic, for example:

– It can’t be stolen with Claim the Firstborn because it costs more than 3. And even if it could, you still wouldn’t be able to sacrifice it!

– Goblins cannot use Skirk Prospector or Treasure Tokens from Willy Goblin to turbo out Muxus.

– Neoform players cannot go off because it requires sacrificing a creature to cast Neoform.

The other day I was playing Gruul Aggro and my opponent cast Yasharn. My board still looked amazing and I had Embercleave in hand ready for next turn, so I wasn’t really worried. Next turn I attacked with everything, intending to put the Cleave on whatever creature my opponent blocked. They did, but for some reason, the game wouldn’t let me cast Embercleave. Imagine my surprise when I realized that my 2 Ramunap Ruins now actually weren’t able to produce red mana, because it requires you to pay 1 life to activate it’s mana ability!

Every day, I keep finding new interactions and abilities that get stopped by the Legendary Boar.

This 4c Midrange or “Turbo Pig”,  as they called it, is basically the old Sultai Ramp deck, splashing for Yasharn. The card itself improves the Jund Sacrifice and Goblin matchups and the mana works perfectly anyway.

This deck got so much better, not only thanks to the addition of BTE, but also thanks to all the Zendikar Rising Double Faced Cards like Shatterskull Smashing, Turntimber Symbiosis and Kazandu Mammoth (which you can even hit in Collected Company). Cragcrown Pathway also improves the mana a lot and it is now much harder to flood out, which was previously something you couldn’t really do anything about.

To make room for BTE, I’ve cut Earthshaker Khenra. Previously, I had it in the deck to have something to do when I hit a few too many lands, and while it was a great mana sink, BTE should just be a little bit better. The only question now is what are the right numbers of Embercleave, Collected Company and Questing Beast for this deck. I absolutely love all of those cards, but they make each other a little bit worse, so you can’t run too many. You need a critical mass of creatures for your Companies and you don’t want to draw too many expensive cards overall.

What was previously the number 1 deck of the format takes a big hit from Yasharn. It is going to need to figure out a way to beat it, because Claim the Firstborn doesn’t work, which is normally your anti-creature card. Increasing the number of Noxious Grasp or Murderous Rider (keeps your Company hits higher) in your sideboard, perhaps always bringing in 4 Thoughtseize in the dark could be the solution.

Chris was the highest finishing Goblin players in the Grand Finals, finishing in… wait, Chris was actually the ONLY Goblins player in the entire event?! What happened?

Goblins is still an incredibly powerful and consistent deck, but it seems like players are opting to try new strategies. Yasharn is also a problem for this deck, making you unable to cast Muxus other than actually taping 6 lands.

I think only 1/32 players registering the deck for the Historic portion of the Grand Finals is an anomaly, and without Omnath in the format, this deck still easily belongs in tier 1.

In my opinion, this is the best Thoughtseize deck in the format. Sure, Sultai plays nicely with Thoughtseize into Spiral into Uro, but it takes a while to actually get on board, which means that you give your opponent a lot of time to draw out of it. Curving Thoughtseize into Dreadhorde Arcanist lets you flash it back again on turn 3 and put a ton of pressure on your opponent.

With Feed the Swarm and Abrade, you now have answers to both Leyline of the Void and Grafdiggers Cage. This deck is a lot better with open decklists though, when you know exactly what kind of answers you should be boarding in.

3
Gideon of the Trials
4
Narset, Parter of Veils
4
Teferi, Hero of Dominaria

I’m still not quite sure that Azorius is better than Bant, but it has been performing a lot better lately. I like the fact that Bant gets to replace Mind Stone with Growth Spiral and play Uro, which is a great finisher. Sometimes, when I play Azorius Control, I feel like I have all the counters in the world and even Teferi in play, but eventually just run out of answers. Uro solves this problem pretty easily.

MJ is one of my favorite deckbuilders, so when I saw him register the Neoform Combo, I was pretty excited. The problem, yet again, is Yasharn. You literally cannot even cast the card Neoform when it’s in play and the deck does not have a plan B. Still, it’s one of the few ways you can actually in on turn 3 in this format, sometimes even with Pact of Negation backup.

4
Gate to the Afterlife
2
God-Pharaoh's Gift

Monoblack Gift players got Feed the Swarm to deal with Leyline of the Void. I really like this version from PV from the PT Finals. Playing 4 Ravenous Chupacabra makes sense in a field dominated by creatures.

As usual, you can’t go too wrong by playing an aggressive deck like Monored in an open format like Historic, especially when the top deck is a slower ramp strategy, and the popularity of Jund Sacrifice and Goblins should be on the decline, thanks to Yasharn.

More Yasharn means less Jund Sacrifice and more slower decks, which should be good for this tempo with a lot of cheap counters.

I really like where Historic is at right now. There is a lot of powerful cards like Thoughtseize, Collected Company and Uro, but the format seems quite balanced. All colors are playable, and so is pretty much every archetype. Whether you’re a control, combo, aggro or midrange player, there are some good deck choices for you to play.