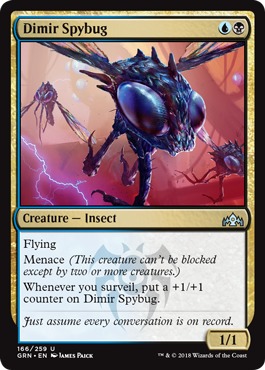 For cards like this, I try to see how many triggers I’d need before I was happy with the outcome. For the Spybug, it’s two, which is enough of an ask that I’m not super high on it. There is potential here, but it takes a little more work than I’d like. 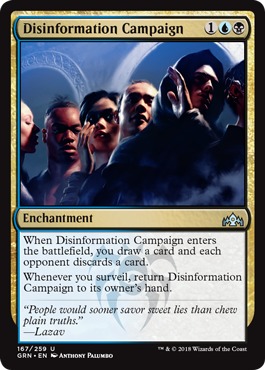 Disinformation Campaign is a hot one. This card does absolutely nothing on the board, is slow to bring back, and takes a ton of mana to really get rolling. Yet, despite all that, it’s awesome. It’s incredibly punishing for slow decks, and provides an inexorable source of massive card advantage. I love this as a win condition in control decks, and to give you a nice throwback to Old School Magic. It’s basically Disrupting Scepter + Jayemdae Tome all in one. I can also see sideboarding this in a deck with 10+ ways to surveil, as it can really be a mirror-breaker. The metagame won’t always be right for this, but when you pick your spots well, this can be an incredible card. 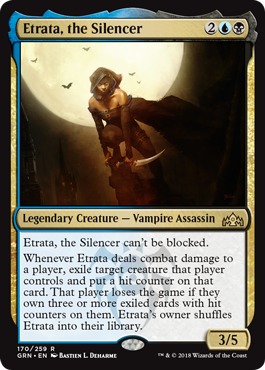 Etrata isn’t quite as loud in Constructed as she is in Limited, though she does some neat things. She’s big enough that she gets around most removal, and can pick off creatures as needed. The idea of tutoring for her somehow and trying to win by accumulating hit counters is cool, though largely impractical. 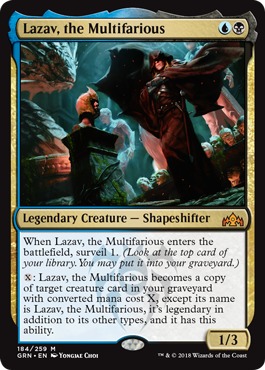 Lazav is a decent deal on the surface, and offers good late game power to boot. You can play him early as a cheap defender that surveils, and when something good hits your bin you can spend a little mana to upgrade Lazav into a real threat. That’s good enough for me, and he seems like a solid fit in U/B Midrange-type decks. 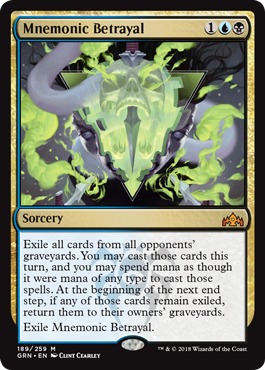 This is a powerful effect, but hard to make truly broken. It would be pretty cute to side this in against Storm and go off with their deck, though in reality I suspect this will be a fun dream more than a very effective strategy. 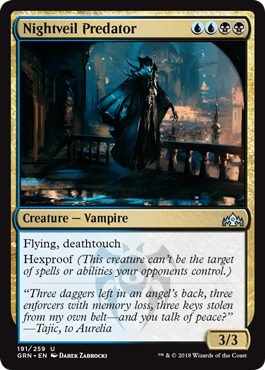 Despite this being the apex predator in Limited, it isn’t at the top of the food chain in Constructed. What it does provide is a hexproof threat that has good stats, evasion, and the ability to trade for anything in combat. This could show up in sideboards against removal-heavy control decks, as it will eventually close out games. 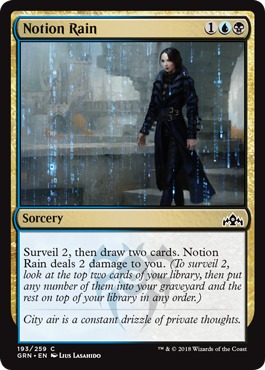 Divination was a staple back when Azorious Control was one of the better decks, and Read the Bones saw plenty of play in Grixis. As such, I bet Notion Rain will be a solid addition to control decks, and even has the extra push that surveil cards like Blood Operative and Disinformation Campaign give it. 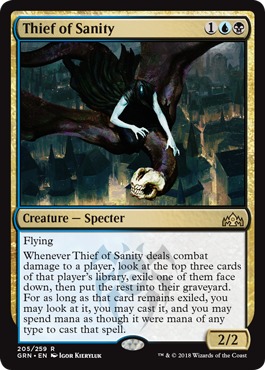 I love me a Nightveil Specter, so it’s no surprise that I think Thief of Sanity is great. It not only color-strips the cards, but you also get to cast them at any point, even if the Thief dies, and you get to pick from three. That’s a lot of action for 3 mana. This will be a great sideboard card and a good main deck one.

A 2-mana play that can snag any card is a great way to disrupt the opponent, and surveil 1 is a very real bonus. I like Thought Erasure a lot, and predict that it will be a mainstay in midrange or control decks of these colors. 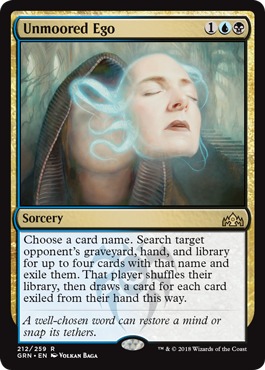 As far as Cranial Extractions go, Unmoored Ego is a decent one. It doesn’t require the opponent to have drawn whatever card you name (though sadly it does give them a refund if you do take copies from their hand), and you can name lands if you so desire. There aren’t too many decks that rely on one specific card, but this is good defense if such decks do pop up.

This is too expensive overall unless there are a lot of juicy targets for Connive. Some metagames will shake out like that, so keep this in mind if it does happen.

Expensive Preordain is solid, and having the other half be a powerful bounce spell is a lot of flexibility. The split of cheap cantrip and expensive card that affects the board is what I’m looking for, even if both halves are a little more pricey than I’d like.

These cards are all awesome, and push both midrange and control nicely. Aggro isn’t quite as well supported, but it’s Dimir, so what did you really expect?