This holiday season, it’s time to give your Commander playgroup the gift of a rockin’ party. How will you do that? Well, nobody throws a better party than the Rakdos do. Now, this commander isn’t from Ravnica, so he’s not exactly Rakdos, but he owns a sweet skyship that can definitely hold an awesome party. Just don’t call it a boat if you don’t want to get thrown off.

It shouldn’t be too surprising that Greven’s view on a Commander game is “It’s my party, and you’ll die if I want you to”—that is to say, he’s a commander damage engine. We’ll be supporting him with a few categories of cards:

Let’s start with some of the most exciting ways to lose life. It makes it easier to pump Greven up when you can gain some value in the bargain. It’s a little different from losing life in a Death’s Shadow deck, but—

—these creatures make it easy to spend life, and they all give you something you might actually want. The mana from Treasonous Ogre is useful (if pricey), and the surveil from Doom Whisperer can fix future draws. Speaking of draws, Wall of Blood will provide quite a few when you sacrifice it to Greven—just be prepared to lose even more life when you do. Bloodtracker also turns life into cards all by itself, meaning Greven lets you double up.

Phyrexian mana costs are just code for “pay life whenever you feel like it.” The more life you pay, the more cards you’ll draw when you sacrifice these to Greven—but that’s not all they’ll do for you. Given the number of ways we’ll have to sneak Greven through, these two can do the same work in a pinch.

It never hurts to have some fun enchantments to help generate some value. Necropotence, Greed, and Arguel’s Blood Fast all add some extra cards to the arsenal, and Phyrexian Reclamation will help bring back some of the heavy hitters. Unspeakable Symbol is the oddball here—it doesn’t provide card advantage, but it can make Greven stronger or buff a lifelinker while allowing you to spend life.

Slower card draw can still be useful since it often comes at a more efficient rate—1 life per card rather than 2 or more. (Well, Necropotence is pretty efficient but does steal your draw step.) Castle Locthwain isn’t quite as efficient, but adding that effect to a land provides an enormous advantage as well.

Paying life to play cards off the top of your library is an enormously powerful effect and should not be taken lightly, either in terms of its dangerous consequences or its amazing outcomes.

One-shot effects might allow us to lose a ton of life all in one go! Fire Covenant, Toxic Deluge, and Phyrexian Purge are all effective removal options that make good use of the life total, while Hatred turns life into damage in a more direct way. Command the Dreadhorde requires some stocked graveyards, but the amount of card advantage that you can generate with it can be a game-winner as it was last year in Standard.

Reanimate on a stick—a stick you can sacrifice later to Greven. Don’t pass this one up.

Card draw is the leg day of Commander. Don’t skip it.

We’ve only slotted five creatures into this list, and that’s not really how you start a party. Let’s see if we can add some names to the guest list. As long as they’re not worried about hanging out on the Predator and possibly getting tossed off the side, they should be fine, right? Some Greven lists include creatures that only last one turn or can’t really function properly other than as fodder for Greven, but we won’t be making those kinds of inclusions—or, as I call them, mistakes. We will not always have our Commander in play, and our deck-building decisions should reflect that.

Any creature with a strong death trigger is welcome at this party, and these four are the best of the best. Vindictive Lich is particularly strong, especially early in the game when we get to use all three modes.

This one’s similar to the Ball Lightnings we’re opting out of, but it doesn’t necessarily die right off the bat. It also comes back for another round after one death, meaning that in the dream scenario, Greven can harness 13 cards from this creature with a payment of only 3 life—over two turns of course.

This owl-shaped Phoenix is also pretty hard to get rid of. Nobody really wants to be the person to spend a removal spell on a 0/1 red Elemental, and whoever does is going to feel pretty silly. Just don’t sacrifice the 0/1 to Greven—it won’t help you.

Greven’s much better with haste. So is the rest of this deck.

Sacrificing creatures that don’t belong to us is extra delicious, whether they’re on the battlefield or coming out of the graveyard.

These all have powerful enters the battlefield effects, and that means they can be callously tossed aside in favor of more cards and damage.

Every party needs a great sound system. If you’re looking to crank up the decibels on Greven so that he can make his mark on your opponent’s life total, these are some of the best options. Let’s start with equipment, where a lot of the power is concentrated.

Giving Greven trample is a pretty obvious move, so it should be no surprise that Loxodon Warhammer and Embercleave feature heavily in my plans for this deck. Lifelink and double strike both give us additional ways to leverage the first half of Greven’s stat block. Whispersilk Cloak and Trailblazer’s Boots both let Greven sneak behind enemy lines pretty easily. Vorrac Battlehorns isn’t one you see every day, but the interaction between its text and Greven’s menace is very strong—it makes Greven unblockable entirely (barring Flash Foliage nonsense—but even then it has trample!)

A classic of the Death’s Shadow decks I mentioned earlier, this one translates very well to Greven. Applications are obvious: attack one person really well.

Discard your worst card to sneak Greven past the city guards, then pay a little extra to lock up an extra card. Effects like this that are repeatable turn after turn are important.

Speaking of repeatable, this one’s a land—and as I mentioned earlier, that’s an edge.

This doesn’t initially look like a way to sneak Greven through, but this combat robot’s battle restrictions say that only one creature can block each combat, and that’s pretty hard to do when you’re blocking a menace creature, isn’t it?

Greven is going to need a lot of energy to keep this party going—and that energy comes from your life total. How are we going to top up the gas tank on that generator? 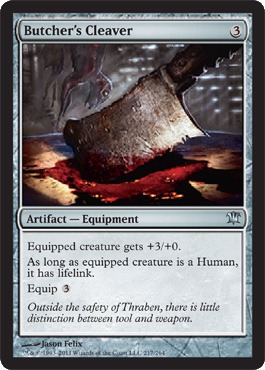 Persistent life gain over time is what will keep Greven in the game for the long haul. Whip of Erebos is possibly the most powerful of these, but Exquisite Blood may be here to give it a run for its money. (No Sanguine Bond combo here, though.) Palace Siege can be useful in either mode, so don’t forget about the options it provides.

These one-time life gain effects are more important when you’ve got a Greven to feed. Rush of Vitality and Butcher’s Glee are both great ways to gain back the life you’ve spent this turn and then some, and Rite of Consumption can combo with cards like Wall of Blood or simply finish off a player by hurling Greven at them. Exsanguinate and Gray Merchant both scale well enough into the late game, but casting them while you still have a full complement of opponents is usually the way to go.

Okay! I’ve mixed in a few bits of removal an some mana rocks, and I’ve come up with a deck list! Here’s my setup for Greven—let me know what yours is like in the comments here or by tweeting to me at @RagingLevine. See you next time, when I’ll still be waiting for more Theros: Beyond Death stuff, just like you!