I’ve spent the last 2 weeks testing Modern religiously on Magic Online. Last week, I wrote a series of articles documenting many of my findings through all of that testing.

The moral of the story here is that I really put a lot of work into Modern. I mean a lot. I dedicated a significant chunk of time, effort, and thought to the dearly beloved Modern format in an effort to ascertain what the most powerful strategies were. I grinded hours and hours. I’d spend 3 hours getting obliterated in a Magic Online League with a deck, make some changes to it, and then jump right back in another League just to get obliterated again. The ol’ rinse and repeat strategy. I poured my heart and soul into this testing. I felt like Rocky—getting punched over and over again, but never losing hope that he’ll take down Ivan Drago in the end.

The thing is, I don’t even know why I did that much testing. Now that I think about it… why did I do that? What even motivates my madness? I mean, my rationale for doing it was to test for Grand Prix Charlotte, a Modern GP that was basically in my backyard. And by backyard I mean 3 hours away, but as someone who routinely drives 12 hours to Grand Prix, 3 feels like a short hop and a skip away.

The reason I’m not sure why I put so much into it is that this Grand Prix didn’t mean much to me. I’ll spare the gory details, but the gist of it is that only a 1st place finish at a Grand Prix through July does anything for me Pro Points wise.

So for GP Charlotte to be a pro level success for me, I had to get exactly 1st place and nothing short of 1st place. 2nd simply would not do. Considering how unlikely it was for me to get 1st place, I made the bold decision that I was going to go, play whatever deck sounded like the most fun deck for me to play, and not care at all how I did. This was a very wise choice.

I normally take Magic very seriously, but I also try to have fun with it, and for me, GP Charlotte was a chance to hang out with some friends, play a fun deck, and see how things went. It was that line of thought that led me to play the 3rd-best deck in the format.

Wait, did I say 3rd-best deck? I meant 3rd-best Abzan deck. I played an Abzan deck that was likely worse than not 1, but 2 different Abzan decks. Let’s not even talk about non-Abzan decks. Mike Sigrist basically described my deck as taking my 2 favorite Standard decks from the past 2 years and just smushing them together.

I showed up to the tournament packing 2 things. A playset of Siege Rhinoceros, and heat. Let’s check it out. 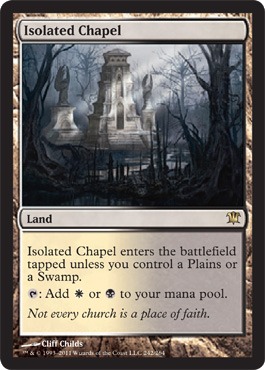 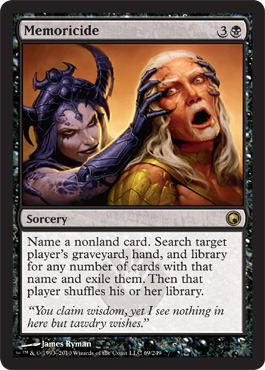 Look, I’m not going to mince words here. I’m going to tell it to you straight, and if you like it, you can have it. If not, you can send it right back. Ready? Here it goes. This deck was a true delight. It was glory incarnate. It was a monumental work of art. I just submitted this deck list on a sheet of white paper to the Modern Art Museum, and they loved it. They think I should have not played Isolated Chapel, but they otherwise loved it. If I’m thinking about some famous paintings, I’m thinking of things like Persistence of Memory, the Mona Lisa… and this 75-card deck list, complete with 2 copies of fan favorite Memoricide in the sideboard. That’s what I’m thinking about.

And while this deck looks pretty random, it’s actually the product of many hours of work. I spent days on this 5th grade art project. I tried out a ton of cards and a ton of different builds, and I kept coming back to this one. Some of the choices may seem weird, but this is actually pretty tuned. Or at least, as tuned as every Standard card I’ve played in the last 3 years jammed into one 75-card deck can possibly be.

Still, I knew going into the tournament that this wasn’t the best deck. If I wanted to win the event, I would have played something like Abzan Company, or Infect, or some other proven tier 1 deck. But if I wanted to maximize my fun level, well…

I was going to ambush some attacking creatures with Archangel Avacyn and see if my opponent displayed their reaction on their face or if they were able to hold it in. I have to give it to my opponents—they did a good job keeping up their poker face when Avacyn haumphed on a creature making its way into the red zone. None of them showed surprise outwardly. But I could see into their soul. I knew they were shocked and appalled. And I loved it. I’d say it was a little disappointing to me that they didn’t give me a good reaction—if it wasn’t for the fact that I was ambushing a creature in Modern with Archangel Avacyn. How could I be disappointed?

By all accounts, GP Charlotte was a disaster. The tournament software went haywire. Rounds 4 and 6 in the event were paired randomly, meaning you could get paired against anyone with any record. I ended up getting paired against an x-1 both times, so it was nothing too crazy for me. Round 5 of the tournament didn’t start until well after 5 p.m., a full 3 hours after round 4. The tournament lasted until almost midnight.

During Day 1, they announced that tiebreakers would reset at the end of Day 1, and then on Day 2 they changed it. A lot of people continued to play in the tournament under the impression that tiebreakers would reset, and it was disappointing and frustrating for many players to find out that they actually didn’t reset. With random pairings, players have zero control over who they get paired against and it’s unfair to have someone finish worse than someone else just because that player randomly got paired against an opponent with a 2-3 record instead of one with a 5-0 record. More than that, though, it’s unfair to promise players that tiebreakers would reset, and then break that promise once they show up to Day 2.

Many things went wrong in GP Charlotte. But for me, this was one of the most fun tournaments I have played in a very long time. I’ve been wanting to play Abzan Little Kid, or Abzan Aggro, or whatever you want to call it in Modern for almost a year now. This was the deck I had sleeved up for GP Oklahoma City last fall until Sam Pardee gave me his Twin deck the day before the tournament and I ended up making 2nd place with it.

Charlotte should have been a negative experience, but I loved every minute of it. I thought the idea of playing in a random tournament was great. I’ve never played in a big tournament that was run in a different way than Swiss Pairings and I wanted to be a part of history. It didn’t happen, but it would have been cool if it did, even if the reason behind it was faulty software.

I’m also glad I finally got to play this deck, and for someone with no expectations, I was quite surprised that I started out 10-0. I played Abzan Aggro expecting a mediocre finish and after 10 rounds I had only lost 2 games in the entire tournament.

Sadly, that’s when the wheels fell off the bus. Let’s just say that some buses are measured in horsepower. This one was measured in Rhinopower, and it didn’t have enough juice to get up the hill. I lost 3 rounds in a row to drop to 10-3 and knock me out of Top 8 contention. Initially, I was a little frustrated by that. I got pretty unlucky to lose a few of those rounds, but if I’m taking an honest look at this tournament, I also got pretty lucky to win a few of my rounds on Day 1. It’s important to consider things in context. For every Collected Company or Become Immense my opponents drew off the top to win the game when I had them dead, there were also those times I drew a Siege Rhino to finish off a game where otherwise my opponent would have had me dead. It goes both ways.

Thankfully, I was able to stay positive about it all. It would have been very easy to let losing 3 rounds in a row and ruining a 10-0 start get to my head. It would have been natural to get frustrated over that and let it spill over into how I played the next 2 rounds. But 10-3 was still better than my expectations, and I was only there to have fun in the first place. What then did I really have to be frustrated about? I kept a positive attitude and I managed to right my sinking ship and win the last 2 rounds to finish up 12-3, good for 20th place.

It’s not often that you get to play a fun deck and do well with it. While GP Charlotte is going to go down in the record books as a bust, let the record show that I, for one, had a great time, played a sweet deck, and genuinely enjoyed myself. It may have been a failure on a grand scale, but on an individual level, it was a definite success.

“What are you at? 3 life? I hate to be the bearer of bad news, but your chances of winning this game are about to come… Crash… ing down. Get it? Like a Crash of Rhinos? Like this Siege Rhino that is going to deal you the last 3 points of damage. If I had it. Which I don’t. So instead I’m going to play and flash back Lingering Souls and hope that’s good enough. Thankfully, it is. It always is. Lingering Souls is. Just kidding, I’ve been slow rolling the Rhino the entire time. Sorry, not sorry.”