If you’re playing control in week 1, you don’t want to go overboard with tech or on a particular matchup. While you could naturally assume Temur Energy and Ramunap Red will be the most popular choices, they could still end up being less than say 40% of the meta. You also want a straightforward power end game where you can go over the top of whatever the opponent is trying to do.

While U/W Approach has never really appealed to me, it has a lot of general answers and a strong end game that doesn’t care about what the opponent does. Torrential Gearhulk has always struck me as a stopgap because of how soft it is to Abrade, and how much it constrains your turn 6/7 play.

Here’s what we lost of real importance, starting with the biggest hits to the deck.

Blessed Alliance in particular is a big loss because it was a great way to take care of early snowball cards like Longtusk Cub while still retaining value later by giving you outs to Hazoret and Bristling Hydra. This is by far the biggest hit to the deck, as there’s no clear replacement for what it does and forces you to run more expensive reactive cards to cover the gap. In fact, we haven’t even seen a good 2-mana removal spell to replace Alliance or Immolating Glare.

Glare was not as big of a deal as Alliance, and I wouldn’t feel nearly as bad swapping in Aether Meltdown in its place. Still, losing any sort of hard 2-mana removal spell is ultimately a big downer for the deck.

Meanwhile, Descend Upon the Sinful was a nice niche answer to have around and that role has already been semi-filled by Settle the Wreckage. In exchange for an Angel, you have a card that can take down similar threats and costs 2 mana less. Settle the Wreckage is important because it covers all the bases Blessed Alliance did, and it discourages any sort of alpha strike. In an ideal world, we could’ve seen these cards work together to create the same “do they have it?” situations Archangel Avacyn did. While Settle has a real drawback, not every deck nets the same advantage off it. Temur Energy may be able to make effective use of 3 extra lands, and Ramunap Red needs a Desert-heavy draw or a fat Bomat Courier. 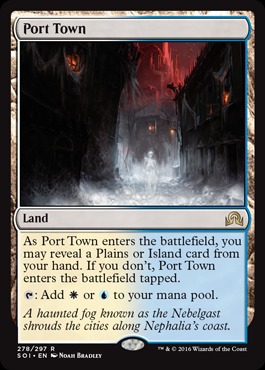 These losses are less important to the deck than the removal package. Irrigated Farmland and Glacial Fortress are easy additions to the deck. Westvale Abbey provided minor value at best and can easily be swapped for other value lands like Scavenger Grounds or Field of Ruin. In fact, Field of Ruin could be what the deck wanted anyway—an easy answer to obnoxious lands like Ramunap Ruins without sacrificing spell slots.

Opt is another big addition to the deck, effectively replacing Hieroglyphic Illumination and providing better early filtering. You have very few lands that come into play tapped on turn 1 and this deck really wants to be able to find specific answers and hit all its land drops. It also gives you something else to do on the draw, which is now a pretty big issue with the deck. Without much 2-mana removal, you have fewer valid alternatives to cycling and Censor.

With the loss of Stasis Snare, even the 3-mana removal slot is sketchy. Skywhaler’s Shot still does a lot of what you want, but again, there are multiple 2-power threats you’d really like to be able to deal with. Perilous Voyage is at least going to get a tryout as a second-turn play that buys time and sets up your next turn. Depending on how big Winding Constrictor is, it may also end up as the better 2-drop choice because casting Meltdown on a Constrictor is not a strong play.

Approach of the Second Sun lines up well week 1 because it doesn’t really matter what your opponent does. Very few decks interact with your win condition game 1, and sometimes you stall until turn 7, cast Approach, then cast a fresh one on turn 8 and the game is over. For a control deck, that’s a ridiculous turnaround rate from durdling around to winning the game. The full playset feels like the correct number for a weekend where decks aren’t yet streamlined potentially giving you extra turns and that much closer to 7 mana.

Still, things aren’t looking great for U/W Approach with no good early removal spells. You may need to go tri-color or adopt a more creature-centric approach to have a shot. Shielded Aether Thief goes well with additional energy cards and blocks well, which is what may need to happen game 1. Authority of the Consuls main deck always seemed like too much of a reach, but if the metagame dictates it, this could become viable. Lastly, main deck answers to Carnage Tyrant are a big draw to this deck compared to straight U/R or any non-white control variations.

If you look at a color combo with real removal options, then Esper or Jeskai are both appealing. One has the reigning world champion of removal in Fatal Push and the other has Abrade and Harnessed Lightning as the 2-mana tag-team champions.

I tried to avoid going overboard on taplands here, so I cut down on white, and since Hour takes care of Chandra and Hazoret, it got the nod over Fumigate. You have the same amount of early removal as the old deck and plenty of catch-all answers for the mid- and late-game. The two largest questions are whether the mana is too inconsistent to be worth it, and whether it’s worse than Torrential Gearhulk control strategies.

Search for Azcanta may be too optimistic, but the idea of ramping in this style of deck is very appealing. This is especially true when you can then use it to search up future answers and Approach. You also aim to trade 1-for-1 far more often with the shard builds, which means your graveyard gets filled that much faster. If you can consistently flip Azcanta though, it opens up a lot of options and makes the full playset of Approach look more enticing. While I’ve gone that route, you can shave one without a huge loss.

These are just shells to poke and prod—the most important decisions will be the tweaks players make to suit their metagame. If any version consistently beats red, you can keep Hazoret under control—that’s not the biggest ask. While Ixalan doesn’t look powerful enough to dethrone the top 2 decks, it’s easy to underestimate a set before you play with it. Amonkhet and Hour of Devastation were both power-downs from Kaladesh block, and you’d be hard pressed to say they didn’t make a significant impact. Let’s see if any of the tribes break through!