The rules are simple enough: Aside from basic lands, if a card appears in one deck in any quantity, it cannot appear in another deck.

Grand Prix San Antonio is coming up this weekend, and there’s a lot of chatter about how to build the ultimate combination of awesome unified decks. Is there an ideal three? How do you maximize your chances? Is there a way to game the system by choosing decks that are good against the meta?

All great questions. But before I get to that, I’d like to say that I love team events. They are easily my favorite part of competitive Magic and I really enjoy the camaraderie element of working together with friends toward a common objective. 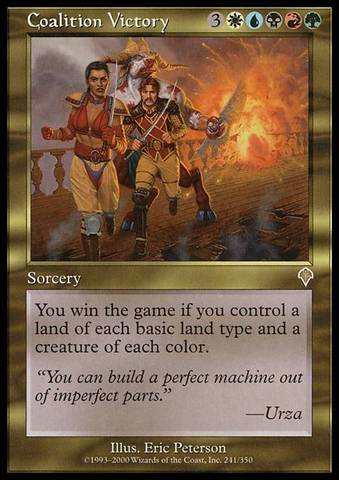 I think the most important decision for a team event is to choose teammates you enjoy being around and who you work well with. My team has a group chat on FB we constantly update with ideas we are trying and suggestions for tuning each other’s lists. We also crack jokes and give each other a hard time, which keeps it light and fun.

“Rob, I literally learned a completely new deck so you could play Overgrown Tombs. So don’t even begin to entertain the idea of taking Relic of Progenitus away from me!”

You have to have a team that gets along. If you are having fun with it and not getting on each other’s nerves, you’ll all be willing to put in more and better effort toward getting a good result.

Choose wisely and have fun. These events aren’t that common, so make the most of playing with people you enjoy.

Choose Decks That Play to Your Strengths

So now that you’ve assembled the all-star team of the best friends that anybody could ever have, it’s time to start thinking about what decks you are going to play.

I keep talking to people about the format and their deck configuration, and the advice I keep giving is: “Play the decks that the players are most proficient with.”

In Magic, people are so obsessed with finding any potential for value that in their quest they often overlook the obvious: What deck do you play the best?

It seems kind of silly to add Death’s Shadow to your gauntlet if none of your three players are experienced with it. The deck is difficult to play well. Knowing when and how much damage to take in racing situations is complicated.

People assume that if they assemble the “best possible” grouping of three decks that they will have the best chance of winning. If the three are Owen, Reid and Huey, I agree this is a great strategy, since I believe that those three will play whatever three decks they choose at an above 99% clip. But for the rest of us mere humans, there is a lot more value in choosing decks that we can play optimally.

When a friend has an affinity for artifacts…

A lot of people ask about my team’s configuration and immediately are taken back by the choice of Affinity in the three. Why wouldn’t you take a better deck than Affinity?

First of all, while Affinity may not be the most stylish flavor of the week, there is nothing wrong with it as a deck. All it does is win! People get too caught up in the wrong details and I have to remind them that Affinity is one of the most consistent performers in paper and on MTGO. Our resident Affinity guy, Brandon Pascal, is one of the Affinity masters.

It makes a lot of sense.

Are there marginally better decks with regard to win percentage in Modern than Affinity? Maybe…? But the strongest move is to play to our strengths and let Affinity guy be who he is and work his Magic (the Gathering).

I recommend a configuration of decks that plays to your teammates’ strengths as much as possible.

The Decks to Consider

The #1 most important rule is that any single card can only appear in one of the three decks. There are certain cards that appear across a wide range of decks, and choosing one disqualifies the others.

One of the best ways to think about your options is to take the most important cards and figure out what they enable.

You can only rock one The Rock deck.

One of the most important cards you’ll need to divvy up is Overgrown Tomb. Once you start to think about it, there are a lot of Overgrown Tomb decks:

The list goes on and on. Basically, B/G facilitates a lot of Thoughtseize + Tarmogoyf decks, among other things.

There are a lot of great Overgrown Tomb decks, and you’ll want to identify the best Overgrown Tomb mage on your team, and which flavor of B/G they are most proficient with.

More word than the bird.

Noble Hierarch is another important card in Team Unified. It goes into a couple of key decks—various flavors of Bant, but also Collected Company, Eldrazi, Hate Bears, and Infect. You’ll want to think about whether or not you’ve got a particular shell for a Noble and who is going to play it.

A Noble Hierarch deck is a great choice for the Modern Unified metagame because it has a fairly unique card pool that doesn’t draw much from other types of decks. Eldrazi and Infect, for instance, don’t overlap with too many other popular decks.

How are you not going to play a dang Mox in one of your three decks!?

Mox Opal is easily one of the most powerful cards legal in Modern. The ability to generate a free mana a full turn ahead of schedule for free is absurd. It is the stuff that Vintage thrives on.

Although the number of decks that can support Opal is small—which is actually a good thing in Unified because it means the cards are unlikely to overlap with other options—consider Affinity or Lantern Control to be possible Mox Opal options for your trio.

Lightning Bolt is another important Modern card to be account for. There are a lot of decks that can make use of Bolt. Jund, Grixis, Jeskai, and Burn, just to name a few.

The important thing about Bolt is that when you really think about how important Bolt is to the decks that play it, and to the color red in general, it feels like a trio can really only field one red deck, whatever it is.

So you’ll want to choose it wisely and in a configuration that enables other powerful options.

Ad Nauseam is a great choice for this tournament because the deck overlaps very little with almost any other popular archetype in Modern. The downside is that the deck is kind of fringe and it might be hard to find a pilot that can really get the most out of this powerful combo deck.

But if you can find somebody who has the will, ability, cards, and time to jam 5-10 Modern MTGO Leagues with the deck, that sounds like a pretty useful teammate!

More ramps than a skate park.

Various flavors of Scapeshift Valakut also seem like a great choice for this event because the core of the ramp deck doesn’t overlap too much with other strategies. The main card is Lightning Bolt, but it is worth noting that you don’t need Bolt to play this deck. There are other options available.

Those are the cards around which I’m most interested in structuring my team’s decks. Personally, I love the Bant Eldrazi deck. It’s way better than I thought it was.

So remember as you prepare for Team Unified:

Most importantly, remember to have fun. Team events are basically the highlight of the Magic season for me. Winning is great, but winning with good friends is the best there is.