Today I have the pleasure to talk about one of the coolest cards in Shadows over Innistrad: Falkenrath Gorger! 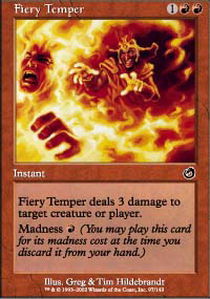 It looks like straight away there will be a big reward for madness in the form of Fiery Temper and Incorrigible Youths. That is already a strong incentive to play a red aggressive deck with a madness subtheme, but when I saw Falkenrath Gorger, my eyes lit up. I wanted to search for all the best Vampires I could—the allure of Olivia, Mobilized for War was too tempting to pass up. Super-powered mythic rare Vampires Drana and Kalitas make this the most obvious and powerful build.

Lightning Axe and Tormenting Voice both serve as enablers and solid cards in their own right. Tormenting Voice has never been fully appreciated. It’s seen only a little play, but it offers strong card filtering. Anticipate and Magmatic Insight are both nice in this respect, but they can’t do what I want to do here. Tormenting Voice plus Fiery Temper make for a very favorable interaction. If they printed 1RR, deal 3 damage and draw a card, it would be a mandatory 4­-of in every red deck in Standard.

If previous Standard formats are any indicator, then good removal is hard to come by and largely dependent on the context around it. Lightning Axe is likely to kill any creature you face, just either discard an excess land—or get a huge madness benefit, making it an amazing card to keep your eye on moving forward.

Imagine using Lightning Axe to kill a Reality Smasher and casting multiple spells with madness as a result—busted.

I decided to include 1 Outnumber 1 Grasp of Darkness, and 1 Ultimate Price, but these are merely placeholders for a customizable slot. Whatever the deck’s biggest weakness is will decide which removal is best. If Eldrazi remains popular, then surely Ultimate Price is not the best option. If Dragonlord Ojutai is a widely played card, then Grasp of Darkness is clearly the best. The value of removal is always changing.

Ravenous Bloodseeker is a Vampire, sweet discard outlet, and hits a spot on the curve where an aggressive creature is badly needed. This Aquamoeba doggleganger isn’t just a functional reprint, there’s some marginal upside here. The second time you hit a player with Drana and trigger it for counters, you can use Ravenous Bloodseeker a second time. I can easily see this interaction deciding a game, since it turns your 2-cost creature into one that turns excess lands into 7 damage. 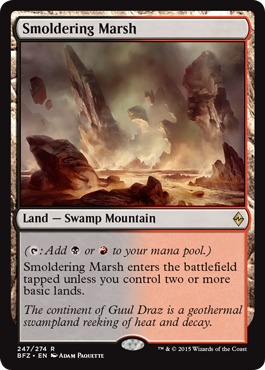 The mana may look a little dicey, but that’s just a product of the times we’re living in. With the fetches rotated out, Standard will be powered down severely. It’s going to be nearly impossible to play a 3-color deck, and if you stick to just 2 colors, you’re still going to have some trouble. I’m not too proud to play with Evolving Wilds, even though it’s a pretty weak card. It works nicely with the battle lands like Smoldering Marsh and isn’t unplayable on its own. Sometimes you just have to bite the bullet and play the slow game if it means you get to cast your spells.