One of my favorite parts of Magic streams, and my stream in particular, is the chat. My chat is comprised of some of the coolest people you could meet while playing a game like Magic on the internet.

There’s one viewer, John, who I’ve become buddies with simply through streaming. John asked if I would try a deck on stream he was testing out, that he’s affectionately named Crafty Abzan. Since this is the kind of thing that’s exactly in my wheelhouse, I told him I would love to take a look.

I’m always interested when certain strategies disappear completely once new strategies emerge and there isn’t a clear-cut reason why. I don’t recall the reason why there were no longer Cryptolith Rites decks in the format, but they were extremely prominent around the time Shadows over Innistrad was released.

If I had to guess, I would assume the losses of card advantage from Collected Company and Elvish Visionary were simply too much for the deck to survive, but John was pretty insistent on breathing new life into the 2-mana enchantment.

There’s still a very powerful engine lurking right below the surface in a deck like this. While the deck initially had Zulaport Cutthroat as its source of damage, this version opts to resolve copies of Marionette Master and sacrifice four or five artifacts to finish the job. While this is definitely slower, the fact that each trigger can deal 4 or 5 damage to the opponent means it takes far fewer permanents hitting the graveyard. 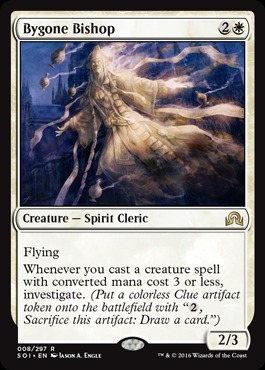 John initially said his original version had some number of Bygone Bishops in it, but he sometimes found himself with not enough small creatures to trigger the Spirit Cleric. I think we might need to take another look at this and address the issue of not having enough small guys. Tireless Tracker is great and all, but you’re limited to 1 land per turn. You could easily play a Bishop on turn 3 and cast two creatures on turn 4.

Also, if this isn’t a shell for Thraben Inspector, I don’t know what is. I also think 4 Loam Dryad are a necessity along with a second Ayli, Eternal Pilgrim. I checked out the legal cards, and 1 mana is about the best rate for sacrificing something in Standard. I also really love Ulvenwald Mysteries, but I simply don’t think you have the luxury of casting it here and getting that engine going. Something like Weaponcraft Enthusiast is simply better suited for this deck. It gives you three bodies to tap for mana with Cryptolith Rite, and two artifact bodies. Unlike Tireless Tracker, this gives you three bodies toward activating Westvale Abbey.

I ended up going a little easier on the mana base as well. I noticed when we tried the deck that a ton of the lands entered the battlefield tapped, which sometimes made it difficult to cast our spells on curve. I know we lost a match because we drew a land that would enter tapped when we needed an eighth mana.

Finding room for a couple Smuggler’s Copters also makes sense. Not only do they allow you to dig to your combo pieces and discard excess cards like Cryptolith Rites or Scrapheap Scroungers, they can also be sacrificed or deal with opposing Copters!

As you can see, I removed all of the removal for more cards that revolve around your central strategy. Angel of Invention and Marionette Master are your big guns and you want to draw them as fast as possible, so up to four we go! 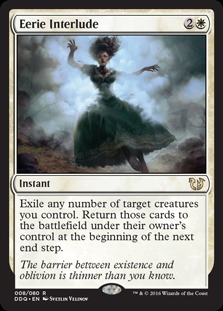 I also think Eerie Interlude is a great sideboard card to let you blink creatures in response to something like Fumigate or Cataclysmic Gearhulk. Who knows? It’s a crazy world out there! Then you get to retrigger all of your fabricates.

I played a match with the updated list and it went pretty well. I was able to win with a Syndicate Trafficker and a Marionette Master by sacrificing a combination of 4 Clues and Servos. While this deck definitely isn’t tier 1, it was a fun and welcome change to what we’ve all been playing recently. Additionally, I love projects like this, that you can continuously tweak and improve between each match—imperfect decks! I think that process is important to becoming a better Magic player as it forces you to evaluate factors you might not have otherwise.

If you’re looking for something unique, give this a shot. If you see any obvious changes that can be made, let me hear them!