It’s been awhile since I’ve had as much fun at a Magic event as I did at Eternal Weekend. I’m obviously a huge fan of Eternal Formats and old cards, so immersing myself for 4 straight days was a delight.

Today, I’d like to recap the decks I played and my observations on each format.

If I had to choose the format that I thought was the most fun, I would pick Old School. I’ve got to give props to Jaco for putting together a terrific event. The tournament was free to enter, held at a local brewery, featured really cool prizes, and was well run. The vibe was super chill.

Even the prizes were undeniably unique and Old School: desirable Alpha and Beta format staples like Jayemdae Tome and Braingeyser signed by all 100+ players in the event! How cool is that?

I went 5-3 and conceded to a buddy in the second-to-last round who had better tie breakers.

The card that impressed me most was actually a last-minute innovation: 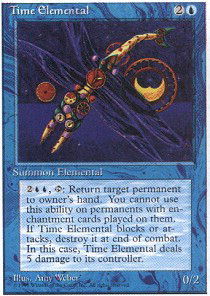 The card was absolutely fantastic against a wide array of matchups. Boomerang every turn (on your opponent’s end step) is insanely awesome.

Another cool thing I learned was that Time Elemental + Disrupting Scepter is very close to a hard lock once an opponent is hellbent. They can’t even draw removal for the Elemental or Scepter because you can just bounce whichever piece they target!

While “The Deck” defines the format in Old School, there is still a lot of wiggle room with other strategies. In particular, I found the artifact deck and U/R Aggro to both be interesting strategies that I’m looking forward to trying out in the future!

I have attended most of the Vintage Championships since the series began way back in the early 2000s. I always enjoy the tournament because it is such a central event in the Vintage community and sets the tone for the next several months.

I decided to play a 5-color Oath of Druids combo deck designed by my friend Paul Mastriano.

I haven’t been playing much Vintage lately and I was certainly a little rusty at the event. I ended up going 5-3-1 with the deck but if I had a little more experience under my belt I would have fared better. In a format like Vintage, familiarity with your deck and expertise with the format is so important!

For instance, I had a round that I unintentionally drew where if I had a turn or two more I would have won the match. I had another round where I lost game 1 and was one turn away from winning the second game in turns. The problem was that the deck was actually really difficult to pilot because of the painful mana base and tons of tutors. I continually found myself in tight predicaments with difficult decisions to make. The deck was solid but it was maybe a little out of my range for this particular event with only a little bit of preparation time.

Although the event was won by U/W Landstill, the 2 biggest stories of the weekend had little to do with U/W Control:

Although no Paradoxical Outcome decks made Top 8, several were in contention up until the last round. It turns out that Moxen + Outcome is a pretty sick combo. I think we’ve only begun to see the powerful things the card can do but for now it seems to pair nicely in a Monastery Mentor shell or in Storm combo.

The dominance of all things colorless…

Between Eldrazi and Workshops there were 5 colorless decks in the Top 8. Stax ultimately fell to U/W Landstill in the finals but the overwhelming narrative of the event was how strong the Thorn of Amethyst decks were.

It is interesting that the DCI has made obvious efforts to reign in Workshops in the past year (restricting both Lodestone Golem and Chalice of the Void) only to see the deck dominating as much as ever.

As counter-intuitive as it may sound, perhaps Ancient Tomb is the card that actually needed to go! I know that sounds ridiculous when Workshop exists but I don’t expect we will ever see Shop restricted for the same reason that I don’t think Brainstorm will ever get banned in Legacy: the cards are really popular with players.

With that being said, I thought the format was pretty fun and diverse to play and after watching the blue deck utterly dismantle the Top 8, I don’t feel like there is a wide disparity between any of the top archetypes, colorless or otherwise.

I’m going to be anxiously watching results to see how these two trends—Paradoxical Outcome and colorless—play out.

Nothing too exciting to see here, but I do think my list was pretty solid. In fact, the deck was much better than I was all day Saturday. I’m pretty sure that I could have won all 3 matches on Sunday if I had made better plays. In all fairness, I was exhausted from 8 rounds Thursday and 9 rounds Friday, but despite my loose play, the deck held me in all my matches and gave me opportunities to win.

It was pretty cool to see Reanimator win the whole event as it’s a great deck that had kind of fallen off a little bit in popularity. Other than the surprise Reanimator victory, the narratives were pretty standard Legacy fair: Miracles and Delver get 5 of the Top 8 spots and the rest of the metagame shares the other 3.

With that being said, the format is pretty diverse. I played against a different deck every round and so the format feels healthy and fun to play.

Eternal weekend was a blast and I really enjoyed getting to dust off all my old cards and take them into battle. I will say that while I may have needed to blow the dust off my cards I also needed to shake the rust off my play! Eternal formats are tough and really skill testing and I didn’t prepare as well as I could have. But based on how much I enjoyed myself I’m going to make an effort to play a lot more Vintage, Legacy, and Old School in the coming months so that I’ll be better prepared next time around. I’m excited to find more events in the coming months.