I just got back from Grand Prix Birmingham where I played Eldrazi Tron to a not-so-glorious 11-4 finish. What’s more, I also managed to convince Ivan Floch and Petr Sochurek to play the exact 75 Thomas Hendriks and I worked on the whole week leading up to the GP. Their record? 11-4 (well, Thomas finished 10-4-1 because he is a scrub). I guess if you want to achieve an amazing feat of going 11-4 in a Modern GP, you’ve come to the right place. Today I’ll share my findings about Eldrazi Tron, my updated list, and a couple of stories from the GP!

First, how did I decide to play the deck? That’s simple. When it comes to selecting Magic decks, I believe there is basically no one better than Pro Tour Hour of Devastation finalist Sam Pardee. He is also considered a Modern master by many, so when I knew I was going to attend the GP, I reached out to him for advice.

Sam swiftly responded that he really liked Eldrazi Tron, and he was even so nice as to lend me the whole deck on Magic Online. Thought-Knot Seer and I also have some unfinished business, as I played Eldrazi at both PT Oath of the Gatewatch and GP Detroit in the so-called Eldrazi winter and failed to produce a Top 8.

All in all, I was eager to try the deck. And once I did, I was pretty excited. I was going 4-1 in most of my Leagues and I basically never looked back. Well, that’s not totally true. I also identified while playing online that Scapeshift was another great deck. I reached out to Simon Nielsen, who eventually Top 8’d the GP, but he sent me a list with no Hour of Promise, a card I was losing to most of the time online. I wasn’t sure if it was the optimal build, and Simon even admitted he didn’t play with Hour. Maybe next time I should just have more courage and pick up a deck I believe to be a bit stronger even though I don’t have a refined deck list. I made this mistake at PT Amonkhet where I chose to play a tuned Mardu list over an untested Marvel deck and it cost me greatly.

Anyway, I still believe Eldrazi Tron was a good choice. It seems that the trio of Grixis Death’s Shadow, Scapeshift, and Eldrazi Tron is a bit better than all the other decks, even though you can obviously find success with everything. I have to admit that I wasn’t a huge fan of Modern in the past, but since the last banning, I’ve been consistently having fun playing the format, so maybe Wizards got it right. We’ll see how the Modern PT (and the team PT to some extent) shakes things up, but hopefully everything will be fine.

When doing my research on Eldrazi Tron, I came to the conclusion that basically all the lists looked the same. There isn’t really much to change when you’re limited to only colorless cards. The only card our deck list omitted completely and is quite common in most lists is Surgical Extraction. It’s worse than the other options you have against graveyard decks (Cage, Relic), and while it can have some implications against the land-based decks in combination with Ghost Quarter, in the Eldrazi Tron mirror that’s not what you want to be doing. Against Scapeshift they have to draw Valakut, otherwise it’s blank, and your matchup against the green Tron decks won’t be good anyway.

We tried to make some changes to the mana base. I was trying Scavenger Grounds, but I think its cost is too expensive and the other lands are bad. Thomas really disliked the Sea Gate Wreckage and wanted to play a 4th Ghost Quarter over it. I have to admit that I don’t know what’s right, but I like having Wreckage as a 1-of bullet in drawn-out games.

Ivan also claims he drew 40 cards throughout the tournament and while I wasn’t as fortunate, I think I also drew a double-digit number of cards with it. I’d recommend playing it.

The one big deviance from the stock list, and our best change is the 3rd Endbringer. It was Thomas who realized that in this deck, it’s much better than Karn. Obviously Karn is better if you can resolve it, but unless you complete the Tron, getting to 7 mana is complicated. With more Endbringers, your Eldrazi Temple  gets much better.

In the end, Endbringer plays the same role as Karn in the deck of being a big, bad finisher that’s hard to deal with, but one of them is much easier to cast. At the GP we still played 1 Karn, but I believe it’s a mistake and moving forward I’d play 4 Endbringers and 0 Karns. Other than that I liked our main deck. Mind Stone is underwhelming and my teammates, especially Petr, were hating on Basilisk Collar. It’s a great card in the mirror and against other creature decks, but it can be quite embarrassing at times. I could see cutting both.

Another card I was a bit disappointed with at the GP was Chalice of the Void. It’s hit-or-miss and maybe it would be better to have it in the sideboard, but like I said, it’s really hard to get enough playables in a mono-brown deck. It does feel that the format is shifting away from decks that are weak to it. With that said, the GP was won by Burn, so I’m still fine with having Chalice main deck.

As for the sideboard, we should have played more Hangarbacks. It’s the best card against Death’s Shadow and it’s actually almost impossible for them to beat. It also isn’t bad in multiples. Liliana is their best card in the matchup and Hangarback trumps her. Other than that, all the cards played their role quite well and I was happy with their numbers.

Moving forward, this is what I would try if I had a Modern tournament coming up.

Petr suggested the main-deck Warping Wail, and I admit it might be a bit ambitious as Chalice is a dead card in some matchups. Still, I expect an uptick in Scapeshift’s popularity, and it’s one of your best cards in that matchup. If you play against a matchup where it’s bad, you can use it as a mini-Mind Stone or as a certain Hall-of-Famer uses it, as protection against Supreme Verdict. I’m not going to share a sideboard guide as Sam already covered it in his excellent article. I’ve learned a lot while practicing for the tournament and I believe you can too! The only thing I’d like to point out is that I sometimes side in Ratchet Bomb on the play against Scapeshift if I expect them to have Prismatic Omen/Khalni Heart Expedition.

As for the tournament itself, these are the decks I played against and my record against each.

I started the day 7-1, dropping a match to Scapeshift where my opponent had 3 of the namesake card while I had only 2 Warping Wails. In round 9 I was paired against a very pleasant opponent. We were joking around before the match started, he won the die roll and said something like, “I need to get all the advantage I can get,” to which I replied, “no worries I’ll just mull to 5.” After that we proceed to draw our opening hands and we both decide to mulligan. My opponent then goes, “now you should mull to 4,” and I said, “sure.” I’m a man of my word, so I did. 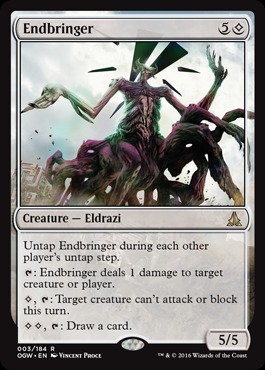 My 4-card hand was actually excellent with Urza’s Mine, Expedition Map, Matter Reshaper and Endbringer. My scry showed me Urza’s Tower, so I was getting excited. Unfortunately, my opponent was also on Eldrazi Tron and had Ghost Quarter at the ready. Still, that slowed him down, and because I topdecked like a God I managed to whittle him down to 1 with my Matter Reshaper as the only card on the battlefield. That same turn, I had a tough decision of whether I should play my freshly drawn Chalice of the Void. I had 6 lands and already played 2 Reshapers to my opponent’s zero, so I decided to play it for 3. I got promptly punished by drawing a 3rd Reshaper and in the end lost the game.

Game 2 was less close, so I ended Day 1 at 7-2. Day 2 started on a similar note as I got completely destroyed by Bant Eldrazi and Jund Death’s Shadow. I’m quite proud that I managed to bounce back and finish the tournament on a high note, securing myself my first 2 Pro Points of the next season. I had one funny game against U/W where I had all 4 Chalices on the table at one point, but other than that it was pretty standard day of Magic.

Overall the trip was a decent success, albeit painful. Unfortunately, I brought a new pair of shoes and my feet were hurting pretty badly. It didn’t help that on my way to Birmingham I got a bit lost at the Brussels airport. Trying to find a way to my gate, I heard an announcement that my gate was closing, even though boarding was just supposed to start. I had no choice left but to run. Now I used to be quite a sportsman in my younger years, but years of playing Magic Online with little to no exercise makes running a bit harder. My terrible shoes didn’t help. I finally reach the gate, basically dying, only to find out that the lady at the desk made the announcement by mistake and that boarding hasn’t even started.

The flight back wasn’t much better. I had to get up at 4 a.m. to make it to the airport so I slept through my first flight to Brussels. In the end a young male flight attendant woke me to ask if my final destination was Prague. After I nodded, he hands me an express connection voucher, telling me that our flight was delayed and that I should rush so that I could make the connection. I did, and after another 15 minutes of running I made it with literally a second to spare. I board the plane, and to my amusement and his, I see the same flight attendant. It turns out that our plane was continuing to Prague but I guess the airport system just wanted to keep me in shape. I feel like my luck pool is getting filled, so I’m hoping for some compensation at GP Metz. Like I said last week, I’m enjoying this Limited format, so I might even try some Sealed decks to prepare for the tournament.

That’s it from me today. Thanks for reading and happy Troning!