Ravnica is a place to call home. Back in 2006, I won Grand Prix Torino playing Ravnica Limited. Some months ago, I played my second GP in Torino, not accomplishing much in the main event, but winning the PTQ on Sunday, maintaining my full 100% Torino -> PT conversion rate.

Now, Guilds of Ravnica is just around the corner, and as soon as I got my hands on the full spoiler, I started dissecting it for some valuable information on the Draft format. After having played plenty of Core Set 2019 Limited, I can’t wait for a more skill-intensive Draft format. Let me guide you through my initial thoughts:

Traditionally, Ravnica Limited played out in the Guilds’ color pairs. Faster decks stuck to two colors in order to keep the pressure up, and slower decks often included a third or even fourth color to maximize the overall quality of their cards. 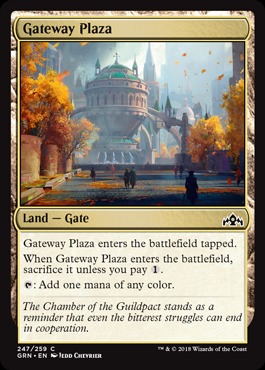 Ravnica offers Guildgates at common, and since there are two versions of each, I’m guessing that they are in two different print runs and thus will be opened twice as much as the other commons. Gateway Plaza at common gives you another fixer for 3+ color decks, and rounding it out with the Lockets and some green fixers, we have a full bouquet for our color needs. With mana fixing this easily and plentifully available, mana bases for 2-color deck should be excellent, mana fixing for 3-color decks will be widely available, and with support for green cards like Urban Utopia, you should easily be able to go for the full five colors.

Going nuts over multicolor options is one thing, but the speed of the format can be prohibitive. Luckily for a durdle-loving drafter like me, Ravnica doesn’t look like it’s going to be blazing fast. Of the Guilds, Boros is obviously the most aggressive and Izzet looks like it can be drafted as a tempo deck (even though I expect most of the Izzet decks to be slower), but all of the other Guilds look rather clunky and/or synergistic. Looking at the commons, even Boros doesn’t have amazing 2-drops, evasion is rare (or uncommon) or not available for free (Skyline Scout) at low mana, and a simple 1/3 is able to take a regular 2-drop down. And then, there also seems to be a small defender subtheme, a fact that doesn’t help the aggro deck. At uncommon, there’s much more powerful stuff going on. Each Guild has a Guildmage at 2, but since they come with relevant late-game abilities, they will often not rush into combat in the early stages of the game.

That being said, I expect the speed of the format to be a 3 or 4 out of 10 (comparable to Dominaria or Hour of Devastation), and I expect 1-2 (around 20%) aggro decks per Draft table.

Can or Should You Draft Mono-Colored Decks?

In original Ravnica, there was a mono-red weenie deck available that tried to punish the slower decks with all of their karoo lands and Signets. In Return to Ravnica, it was nearly impossible to get a good mono-colored deck. And then there was just no need to, since the Guild cards were too good to pass up. I expect that you should not be starting the Draft format by playing mono-colored decks in Guilds, since the multicolored cards are just so good and there is no payoff cards à la Corrupt for going mono.

Again, back in the days of old Ravnica, you could draft a green-red-blue enchantment-based deck even before Izzet, Simic, and Gruul were out. Obviously, the deck got better with the inclusion of the expansions, but the deck wasn’t weak at all. Still, I wouldn’t try out these strategies before I really knew the Draft format. Maybe there will be a weird blue-green graveyard deck, but I doubt you should play this without black.

Why Should I Stick to Two Colors With All of the Nice Mana Fixing Around?

Mana fixing comes with a price, which is primarily a loss of tempo. You don’t want your Boros deck to destroy its curve by playing too many Guildgates just because you wanted to splash some nice Izzet cards. So if your deck cares about tempo—either because it’s fast itself or you’re scared about the format being too fast—stick to two colors.

Another price of mana fixing is the picks you have to spend during Draft in order to get the good pieces of fixing. So if you are able to find an open Guild and get enough quality, you might not even need to dip into another color to maximize on good cards.

And last but not least, the Guild payoff cards. Each Guild has an uncommon with four colored mana symbols in its cost (e.g., Golgari Findbroker). Since the cards have a high power level but demand a lot of your mana base, you should be willing to make the sacrifice and stay in only two colors. I’m not saying that these cards are unplayable in a decent 3-color build, but you often will not be able to play them on turn 4.

How Do I Draft the Guilds Then?

Selesnya cares about creatures to convoke out big spells. There seem to be convoke synergies with tokens, and even some life gain payoffs between some rare cards, but you don’t need those synergies to make a good Selesnya deck work. The creatures are good on their own, so focus on raw power level and a good curve instead of token or convoke synergies. And if you get some of these expensive convokers, feel free to add some cheap enablers.

Boros looks like a traditional aggro deck. Mentor is more of a bonus than a synergy, but it might push the 1-drops and combat tricks, as well as lifelink and double strike.

Golgari seems like an odd Guild to me. There are many cards with small undergrowth benefits, but it seems to lack good enablers. But then again, traditionally creatures will just die over the course of a game, but sometimes, your opponent will deny trades or is able to play around undergrowth cards. If you happen to pick up some uncommon enablers early, feel free to try to assemble the full graveyard deck, but most of the time, look out for removal and good green creatures, as well as fixing to add another color.

Dimir is the control deck of the format. Surveil might enable some undergrowth stuff or jump-starts here and there, but most of the time, it will play out just like scry. This means Dimir will be well-equipped to fight attrition wars in the later stages of the game where surveil becomes closer to drawing extra cards, since getting rid of extra lands will feel like looting. There are a few very strong and interesting surveil cards as well, most of them at uncommon, so I imagine that drafting a really synergistic surveil deck is also possible.

Izzet looks promising and variable. There could be a kind of instant/sorcery-based combo deck—you can draft it as a tempo deck with cheap jump-starters or you can go for control with card draw and removal. Jump-start will also be a nice attrition tool to loot away extra lands in the late game.

Which Wedges or Shards Should I Draft?

The ones that include two Guilds. Jeskai, Sultai, Naya, Abzan, and Grixis will work. The wedges not featuring red should be slightly prioritized, since red and Boros in general features the most aggressive cards, which are not at their peak in 3 colored decks. Sultai will have good undergrowth/surveil synergies, Grixis works well with undergrowth and jump-start as well, and Abzan looks like it has the strongest cards concerning raw power level.

Yes, you can, and I even think you should. You will probably have to run green as one of your main colors since it offers the best 5-color fixers, and you should grab your fair dose of Gateway Plaza. You probably want a Selesnya-focused mana base and some cards like Centaur Peacemaker to survive the early game, or Golgari if you manage to get Dead Weights. There’s even a little Guildgate subtheme in the set, rewarding you for collecting the max amount of Gates.

How Good are the Lockets?

Pretty good in every non-aggressive deck. Always run up to four unless you plan to end games quickly. Note that they are also fine in 3-color decks, if you have 6+ sources of the involved colors. Don’t splash off of Lockets.

Hypothesizzle looks and sounds strange, but this mini-Prophetic Bolt seems like it has the highest power level overall. Sure, you have to discard a spell to it in a stage of the game where you would prefer to keep it, but jump-start and therefore the value of excess lands make up for it. Early in a Draft, I would prefer a mono-colored card. Deadly Visit seems to be the best of them in a slower format, but Dead Weight will be close since it really shines in slower decks and is a nice followup play to a Locket.

And the Best Uncommon? 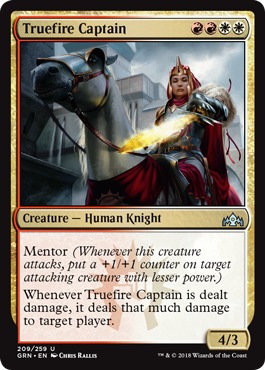 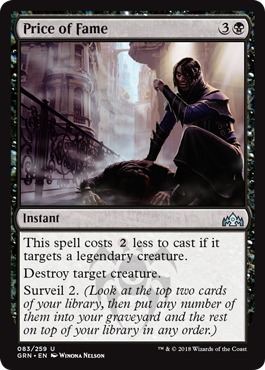 In general, the uncommons look fair to me. There’s nothing spectacular like a splashable mythic uncommon in here. The Guild uncommon cycle (Golgari Findbroker, etc.) looks very strong. Truefire Captain would be my pick for highest power level overall, since its ceiling is just so high and combat tricks become absurd. Still, first pick first pack I would start with Price of Fame above all uncommons.

Is There an Early Favorite for Underrated Card?

I really like Healer’s Hawk. Unlike its many predecessors, this card should play out really well with convoke and mentor. Pick it up early if you’re in Selesnya or Boros.

That’s it for today. Happy drafting and feel free to share your initial thoughts on the format.