Recently, Matt Sperling shared an amusing similarity between an account name and that player’s deck size.

Implicitly, Sperling was referring to the common Magic wisdom (disregarded by BigStupid) of sticking to the minimum amount of cards. The main reason for this wisdom is simple: It maximizes the probability of drawing your best cards. The more cards you add, the less likely you are to draw your best cards.

Seth Manfield, the reigning Pro Tour champion and former World Champion, defended BigStupid’s deck size. According to Seth, if your power level is flat, then it can sometimes be correct to go over the maximum to add “half a land” to your deck.

I actually think it is sometimes correct to play 41. Sometimes you want essentially 1/2 a land, and your deck doesn't have cards super overpowered that just win the game on their own.

Some people agreed with Seth.

Sometimes when you are in doubt between 16/17 lands because of mana hungry/mana curve can be correct to go 17+24. If you also have good cards etc.

Others felt that the word “sometimes” was too strong and argued that it’s extremely rare for 41 cards to be correct.

So what’s my position on this?

Well, several years ago, I wrote an article titled “Is playing more than 60 cards always a bad idea?” where I provided several niche reasons for going over the minimum. One of the reasons I analyzed was “you want to optimize the mana ratios.” Back then, after simulating 12 simplified formats, I was unable to find an actual example where an improved land ratio was truly worth the inconsistency of a larger deck.

But the simulations I did there were limited in scope, and the explanations I gave in that article could have been improved. Inspired by the recent Twitter discussion, I decided to revisit the issue in more depth.

What if only there were only two legal cards: Kalonian Tusker and Forest? 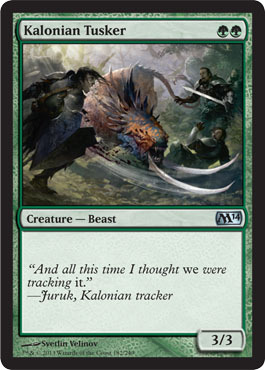 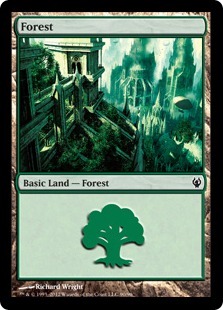 Using the same methodology as my article from several years ago, I considered formats with only two legal cards, starting with Kalonian Tusker and Forest. I varied the deck size over a broader region than before (from 30 cards to 70 cards) and determined the optimal deck for every size. My hope was to find a spot where adding an extra card would lead to an improvement.

The two-card setting is perfect because the power curve is completely flat. As both Seth and Andrea rightfully argued, you can only consider 41 cards when your worst cards are on par with your best cards. When you can only play Kalonian Tusker or Forests, then your worst card is as close to your best card as you can get. So this setting is ideal—if you can ever find a clear example where you should play an extra card to optimize mana ratios, it should be here.

How did my experiment work?

As mentioned, I ranged the deck size from 30 to 70. For each deck size, my algorithm (the same as in the previously mentioned article) diligently considered all possible decks consisting of only Kalonian Tusker and Forests. So for a 40-card deck, I considered 1 Kalonian Tusker and 39 Forest, 2 Kalonian Tusker and 38 Forest, and so on. To be fair, I disregarded the ones that might not win before getting decked—a sad fate that crashed my computer simulation—but for all reasonable configurations, I determined the average turn to beat a goldfish on the play under an optimal mulligan strategy via tens of millions of simulations per deck.

The result was a convex function like this. (The 95% confidence intervals were plus/minus 0.0003 turns.)

This figure claims that 20 Kalonian Tuskers and 20 Forest is optimal, with an average goldfish kill on turn 5.2369. You can’t really tell that 20 Tuskers is optimal from the graph, as near the optimum it’s really flat. I can only prove it by giving you the numbers: 5.2379 for the 19 Tusker-21 Forest deck and 5.2380 for the 21 Tusker-19 Forest deck. In other words, it’s the third or fourth digit after the decimal that determines the true best deck. It’s really a tiny difference.

This illustrates a valuable insight: If you are slightly off the ideal mana ratio, then the impact is extremely small. In other words, if you choose 17 lands when 18 lands would’ve been slightly better, then your choice will yield almost the same performance as the optimum. A nearly optimal mana ratio is fine too.

Yes yes. But can you improve by playing 41?

When you move to 41-card decks, a similar analysis reveals that the best deck consists of 20 Tuskers and 21 Forests, with an average goldfish kill on turn 5.2383. This is higher than the number for the optimal 40-card deck, which means that you can’t gain by playing an extra card if the minimum is 40.

Here are the full results for all deck sizes.

That’s a nice collection of points. What does it mean?

I still haven’t found an example where playing more than the minimum is correct.

The average kill-turn is monotonously increasing in the deck size, with no small dips anywhere at all. There was not a single time where you can get a faster average kill by adding an extra card to your deck. Sticking to the minimum, whether it’s 40, 60, or any other number of cards in my experiment, was always correct.

“But why couldn’t you find such an example?” you might ask. “Surely there must have been a point where a better land-to-spell ratio could be achieved by adding an extra card?”

Well yes. The ideal land-to-spell ratio seemed to hover around 51%, and some deck sizes could get closer to that number than others. But there’s another factor at play.

As you saw in the picture, the average kill-turn increases (slowly, but steadily) as the average deck size grows larger. This happens because larger decks have more variance.

Variance pertains to the degree of uncertainty in the mix of cards you draw. Suppose that your first card is a Kalonian Tusker. Then, since you’re not drawing from an infinitely large deck, the number of Kalonian Tuskers and thus the mana ratio or creature ratio in the deck changes. And the smaller your deck, the more noticeable this change. As an extreme example: If you have a two-card deck with 1 Kalonian Tusker and 1 Forest, then you’re 100% guaranteed to draw Forest next.

So when you consider adding a card to your deck, it’s not just a matter of achieving the “perfect” land ratio. You also have to be sure that these benefits outweigh the increase in variance and overall reduction in consistency. And usually, they don’t.

I do have to mention that both effects are miniscule at best, but even for tiny numbers you can see that one is larger than the other.

These effects continue to hold for other simple formats.

I only showed a graph for the Kalonian Tusker setting, but I also studied several other simplified formats.

All in all, I looked at over a hundred different format-deck size combinations, and I failed to find even a single example where an additional card would improve the deck’s performance.

Once you add even a single standout card, things become even worse.

In other words, once you unflatten the power curve and introduce even a single standout card, then the downside of a larger deck becomes even more prevalent. You can imagine how strong this effect would be (especially in comparison to the small benefit of achieving a better mana ratio) when you consider an actual deck with multiple key cards.

To conclude, the absence of an example does not prove that running a 41st card for a better mana ratio can never help. Maybe if you consider different formats or a criterion other than optimal goldfish kill, you might finally find an example where an extra card does help. But based on today’s analysis, I’m not holding my breath. And even if you find one, you’d be in an unrealistic setting with a fully flat power level that wouldn’t translate to a real Draft.

I think Owen was right:

“If it’s correct the super computer would do it 1/50,000 drafts and humans are making a big mistake eyeballing it.”