There’s a phrase I hear bandied about often: “Magic, as Richard Garfield intended it.” People use that phrase to describe games where someone locks their opponent out of the game on turn 1, or where Emrakul and Griselbrand both attack for lethal on turn 2, or where a Dredge deck wins a game without casting a single spell. Basically, if you hear that phrase, something ridiculously broken happened. The idea is that when Richard Garfield first designed Magic, he was thinking about Dark Banishing killing off Craw Wurm, not Tendrils of Agony going upstairs for the full 20 on turn 1, and this phrase highlights the absurdity of some games of modern day Magic.

Did Richard Garfield want Thought-Knot Seer to pick apart the opponent’s hand on turn 2? Who really knows, but he probably felt pretty good about Reality Smasher trading off with a Tarmogoyf on a double-block. He probably felt all right about a 6-mana 5/5 being played in a format where Brad Nelson can kill someone on turn 2 through an Inquisition of Kozilek.

Six months ago was a period of time known only as “Eldrazi Winter.” Eye of Ugin and Eldrazi Temple teamed up along with Thought-Knot Seers and the like to make Modern their own personal hell. I liked that hell. I never got past that hell. I’d like to dial things back to those better days of yesteryear, those simpler times where Eldrazi roamed free with nary a care in the world.

That’s why I’m back on the Eldrazi train, baby, and I’m not getting off until 3 a.m., when the last train stops running. Eye of Ugin may not be enabling ridiculous Eldrazi Mimic draws anymore, but there are still some sweet things you can do with Eldrazi Temple and Thought-Knot Seers.

Bant Eldrazi is that thing.

This is the list I played last weekend, but there are some changes I’d like to make to it.

For one, Birds of Paradise has to go. Noble Hierarch’s exalted is surprisingly relevant, allowing for 4-power Matter Reshapers and 6-power Smashers on offense, but Birds of Paradise was such an unbelievably dead draw any turn other than in your opening hand that I can’t justify keeping that little fellow around.

While I had a great experience with Matter Reshaper, Ali Aintrazi didn’t like the card and thought that Eldrazi Skyspawner is a better option. Skyspawner provides a flying creature, which is relevant in a number of matchups, including Affinity, and it also helps accelerate into faster Smashers and Drowner of Hope. Swapping Reshaper for Skyspawner means that Birds of Paradise can easily be replaced with the 4th Drowner of Hope. Having Skyspawner and Drowner of Hope also makes Eldrazi Displacer better. That’s not really necessary, but still a nice bonus.

I’m not sold on cutting Reshaper, and that card has always been good to me, but I can understand the logic behind the swap and it’s worth testing.

I’ve seen a lot of lists playing Elder Deep-Fiend. While I personally have not tested with the card, I’m not sure how great it is. There aren’t a lot of creatures that I would want to sacrifice to emerge it, and while 8 mana to hardcast is doable with this deck, it’s not something I want to bank on. My general rule of thumb is to stick to nuts-and-bolts cards that are good as often as possible and avoid high variance cards that can sometimes be high upside but are just as often going to be bricks. It’s not a card I expect to be great in this deck, but I’m willing to be proven wrong, and I imagine there are moments where it dominates.

Bant Eldrazi literally and figuratively smashes other midrange decks. Decks like Jund are at a huge disadvantage against cards like Reality Smasher, Drowner of Hope, and Matter Reshaper.

Eldrazi Displacer is an extremely powerful card. Displacer can combo with Thought-Knot Seer to reverse loot your opponent. You blink Thought-Knot Seer, let them draw a card first, and then steal their best one afterward. It can also combo with Drowner of Hope and Eldrazi Skyspawner to overrun them with Eldrazi Scion tokens, tokens that also serve as pseudo-removal with Drowner in play.

Even past self-made combos, Eldrazi Displacer absolutely destroys some decks. It’s very good against Affinity, where you can use it to keep both Cranial Plating and Arcbound Ravager at bay. It’s great against Infect. It nullifies their pumps spells in combat, unless they have a lot of Vines of the Vastwood to protect it with. Over time in creature matchups, it takes over the game.

Even more than that, though, Ancient Stirrings is how Bant Eldrazi beats a lot of other decks. Bant Eldrazi has access to Spellskite, Eldrazi Displacer, Thought-Knot Seer, Grafdigger’s Cage, and Engineered Explosives. Each of those cards can be game-winning plays in a variety of matchups, and Ancient Stirrings provides a huge chance to see the ones you need, which means that Bant Eldrazi is going to have game against the decks where those cards are great.

It has access to great hate cards. Stony Silence, Worship, Rest in Peace (if you want it), Grafdigger’s Cage, and Engineered Explosives are just giant K.O.s in various matchups. I lost a lot of game 1s with Bant Eldrazi in the SCG Invitational, but things always rebounded post-board where I got to greatly improve my deck in whatever matchup I was playing. Even Blessed Alliance is a really nice card against decks like Death’s Shadow Zoo, Bogles, Infect, and even Burn.

The deck has to mulligan a lot and sometimes has some awkward draws. Sometimes you get a hand of a bunch of 3-mana 3/3s that just don’t do anything against your opponent’s deck or hand. Even though the deck has added consistency with Ancient Stirrings, it isn’t always enough. The mana base is also not perfect, since you’re basically playing a 4-color deck (Bant + colorless) and sometimes you don’t have the colorless source for Thought-Knot Seer or are missing one of your other colors.

The deck is weak game 1 to Affinity, and you need to draw some hate post-board to win the matchup.

The deck is weak against land-based strategies or degenerate combo decks, and even with access to a card as nice as Stubborn Denial, it still is often not enough to win post-board.

The deck is one-dimensional and can lose to random hate cards as a result. Things like Blood Moon or Ensnaring Bridge are rough to play against. It’s still possible to win with things like Eldrazi Displacer and Thought-Knot Seer to mill them out, but it’s not where you want to be.

Thought-Knot Seer. Those spindly legs just aren’t doing it for me.

I’d provide a sideboard guide for the deck except, well, there are just way too many decks in Modern to make this a reasonable thing to do. What I will say is that I usually don’t sideboard too many cards in any given matchup, and the cards that usually come out are things like Spellskite in fair matchups like Jund, Dismember and Path to Exile when those cards aren’t useful, Drowner of Hope in matchups where the games are too fast, Matter Reshaper in matchups where the body is irrelevant, and so forth. I even side out Thought-Knot Seer against Affinity, where they are too fast to disrupt, and you don’t want them to draw a card later in the game when they kill it. 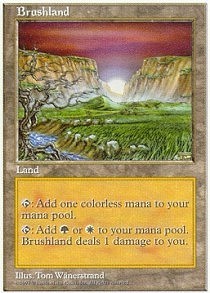 One of the most important things with the deck is sequencing. Sometimes it is correct to lead with Brushland on turn 1 to cast Ancient Stirrings instead of a Forest, even though you take a damage doing it that way. It’s just important to have access to white mana to cast turn 2 Displacer if you happen to find it off of Ancient Stirrings or find the Temple you need to cast one in hand.

Most importantly, though, I don’t play around too many things and just jam my threats. Playing Eldrazi was a nice way to relax from the normal stress of Modern. I played big threats, smashed in when I could, and didn’t worry about too much. There are only a few decisions to be made each turn in most games, and Eldrazi is one of the easier decks to play in the format. A lot of players see that as a drawback. I don’t. Just because a deck is easier doesn’t mean it’s worse, and I greatly value being able to have simpler decisions rather than having to take these hard and complicated lines just to win a game.

I’d rather just smash their face in. That’s my reality. Maybe it can be yours too.