One of my favorite parts of playing Magic has always been building my own decks. Obviously, building your own deck in a competitive format like Standard is challenging with information being generated, sorted, and disseminated so quickly.

It’s old news that we live in the “net deck” age and players don’t need to build their decks from scratch. There are thousands of tuned lists available at the click of a mouse. So, why bother?

The process of imagining a new idea, figuring out how to make it work, and seeing it come to life is a highly rewarding process. It teaches us a lot about how a format works and makes it more clear why certain decks are format defining.

Magic is a gigantic game played by hundreds of thousands of people worldwide and it is a really neat feeling to invent a piece of technology that becomes part of the metagame. It’s satisfying to see a version of a deck that you and your friends put together perform well in a tournament. A few months ago a player Top 8’d a Grand Prix with a Jeskai Modern deck that I worked on with Kyle Boggemes—they got it from one of my articles. We both had winning records at GP Detroit with the list, but it was validating to see somebody take the list to a Top 8 because we really felt the approach was solid and thought out.

Well, here’s a new approach I put a lot of thought into:

I’ve been enjoying working on the deck on MTG Arena. It’s basically the only deck I’ve played since the update reset the rankings and I’m currently almost through gold level, playing and working on it on my Twitch stream the past week.

I know most people who see this article will assume the deck is gimmicky and bad because it hasn’t won anything, but I think the deck is competitive with a ton of potential for tournament play (especially with Stomping Ground on the horizon).

First and foremost, the reason I believe this deck is legitimately good is because it’s the most dedicated and focused Carnage Tyrant deck I’ve seen so far. When Carnage Tyrant was first spoiled I wrote an entire article about how I felt the card was a game-changer.

Plan A with Naya Dinosaurs is to jam Carnage Tyrants down your opponent’s throat until they run out of answers. It’s simple. There are few cards that answer Tyrant outright, it can’t be countered or targeted, and the first one is often more than enough.

On top of having the full playset of Tyrant, I also have more cards that help me search up Rex to make sure it shows up. 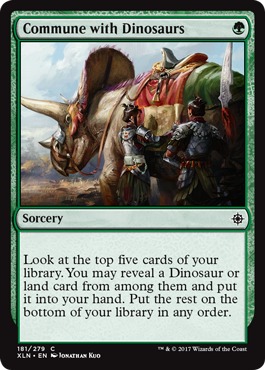 The fact that the deck has this redundancy allows it to function with a high degree of consistency, which is important. Consistency + power = wins.

If you are interested in brewing your own decks, that is the formula to think about. Think about something that is powerful within the context of the format and then figure out ways to execute that plan consistently.

Another important note about the deck is that it doesn’t have “bad cards.” The point of brewing isn’t to play with bad cards. The point is to find new ways to use the best cards. Or to find ways to make an overlooked card into something that is contextually very broken: 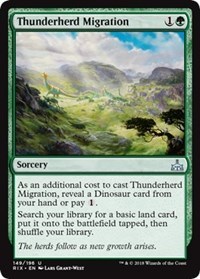 Ancient Stirrings and Rampant Growth are busted cards. I have to put in a little bit of work to make these cards approach that level, but it’s close enough by Standard’s… standards. In fact, I have a high enough concentration of Dinosaurs that it allows these setup spells to be extremely efficient.

I also don’t have to jump through too many hoops to power up Commune and Migration: 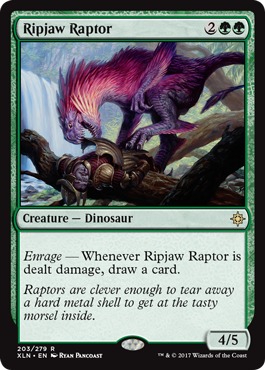 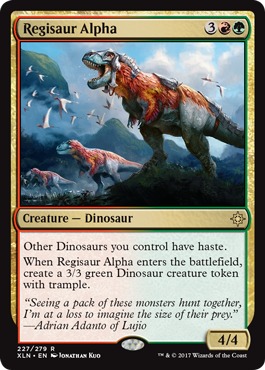 These cards are all great on their own and they share another important quality in common besides just adding to my Dino threshold:

Not only did I build the most focused Carnage Tyrant deck, but I may also have built the most synergistic Deafening Clarion deck!

Clarion is another format defining card that bombs a huge percentage of the aggro meta back to the stone age. Now imagine playing it in a deck full of great creatures that not only live through the ‘clasm but gain lifelink… it’s a backbreaking sequence against White Weenie or Red Deck Wins.

It’s also kind of sweet that Ripjaw Raptor has enrage, which means that not only does it survive and gain life from Clarion, but it also allows you to cycle Clarion against control matchups when it would typically be a dead draw! 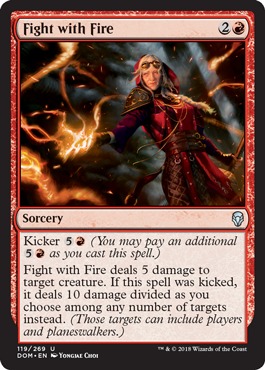 Naya is also the perfect Fight With Fire deck. I have rampy elements already, since I’m trying to accelerate into Tyrant. When you flood and/or the game goes late, the kicker mode scales an already efficient removal spell into a game-ending bomb.

Although not a Dinosaur, I’m sleeving up Lyra as well. She’s a beast and a powerful tool for locking aggressive decks with limited removal out of the game. A lot of the removal that kills her is enchantment-based, and I have four Brontodon and two Vivien Reid main deck to free her up.

I’ve gone back and forth on whether or not to include these in the main deck. I’ve opted to board them but in the right meta I’d main deck. The Arena metagame is aggressive, so I’ve opted not to start them anymore.

This is a really fun deck to play that is definitely of the Brian Kibler school, combining powerful threats, efficient removal, and rampy elements. I mean, it’s a Dinosaur deck—it wasn’t going to be a Cuneo deck…

Nonetheless, I’ve always wanted to play with the Dinosaur tribe and finally picked my moment to try. I’ve got to admit that I’m digging how easy Arena makes it to playtest and tune new decks against a wide array of strategies without having to pay an arm and a leg in entry fees. I did have to use quite a few wild cards on some of the Dinosaurs, but I enjoy playing the deck so much that I don’t even mind. There are few among us who truly understand the joy of casting a Wakening Sun’s Avatar. I highly recommend giving it a try.