Cheap, resilient creatures backed up by the efficient interaction from black is a recipe for success in Modern. This deck deploys tough-to-kill creatures and effective disruption against combo decks, giving it solid matchups across the board.

Bloodghast is not an easy creature to keep down. All it requires is a single land drop to come back from the graveyard and onto the battlefield. If you’ve managed to deal some damage earlier in the game, you’ll even be gifted haste from your reborn Vampire. Only needing a land to enter the battlefield means that fetchlands can get these back multiple times. It also means that you can sacrifice your fetchlands already in play during your opponent’s end step to get pseudo-flash and play around sorcery-speed removal and sweepers. 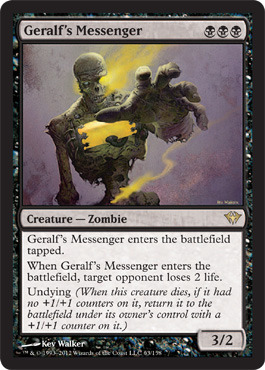 Geralf’s Messenger is held back by its casting cost, but that isn’t a deterrent in a mono-black deck. Messenger is reasonably sized at 3 power for 3 mana, but it also gives you some extra reach when it enters the battlefield. If they have the Bolt or revolted Fatal Push for it, Geralf’s Messenger only comes back as an even bigger threat (and makes sure to take 2 more life for its troubles). 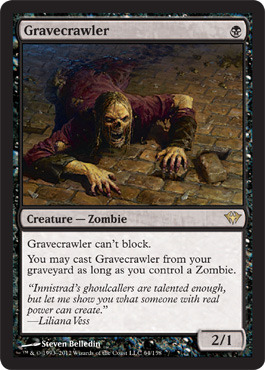 Gravecrawler is a solid aggressive creature in any black aggro deck, but having a single Zombie around means your Gravecrawlers will keep coming back for more. With very few removal spells that exile being commonly played in the format, this is a huge bonus. If they cast Path to Exile on your 1-drop, giving you another land, you’ll be pretty pleased with that exchange.

Relentless Dead is yet another creature most removal spells aren’t effective against, and it can even give you extra value if they’ve managed to deal with both halves of something like a Geralf’s Messenger. Relentless Dead is hard to block, and unlike many of the other creatures in this deck, it can actually play defense when needed.

Cryptbreaker is fairly insane in a deck with tons of ways to get its creatures back from the graveyard. Discarding a Gravecrawler to make a 2/2 Zombie only to pay the single mana to get it back is going to put you light years ahead of your opponent. Discarding Bloodghasts before making your land drop is just more value, and Cryptbreaker will allow your Zombies to start churning out the card advantage in no time.

Gifted Aetherborn is not a Zombie, just like Bloodghast, but you’re getting a cheaper version of what will be Vampire Nighthawk in most matchups. This is a great way to pad your life total and to make sure any Burn opponent will have to take time off to deal with your creatures. Being able to trade for Tarmogoyf or Death’s Shadow while gaining a bit of life makes the Aetherborn excellent in creature matchups.

At the top of the curve, there’s Kalitas, Traitor of Ghet, who can provide Zombies while also sacrificing cards like Gravecrawler for value. Gray Merchant of Asphodel can drain the opponent out from some pretty high life totals, especially with Geralf’s Messengers and 12 creatures that cost BB.

Mono-black has access to tons of great interaction. Thoughtseize is there to mess up curves and combos. Fatal Push might be the best removal spell in all of Modern (although I would consider adding a couple more fetchlands to this list, especially with a playset of Bloodghasts). Collective Brutality is going to be your best card in matchups like Burn and flexible elsewhere. Dismember and Liliana of the Veil can help deal with the bigger creatures in Modern.

Mono-Black Zombies offers a quick clock and disruption. As long as you steer clear of Anger of the Gods (or if Hallowed Burial makes a comeback), you’ve got resilient creatures that aren’t vulnerable to most of Modern’s removal.