When one of the best deck builders of all time brings something a little new and different to the table, we all should take notice.

Atarka Red is nothing new. Hordeling Outburst, Dragon Fodder, Monastery Swiftspear, Zurgo, Bellstriker, Abbot of Keral Keep, Atarka’s Command, and Fiery Impulse are not new players to Standard or to seeing play in the same deck. Going even wider, however, is a different take on the archetype.

Josh Utter-Leyton managed to barely miss the Top 8 of the MOCS this past weekend, finishing in 9th place, with his RG Tokens deck. The notable inclusions to the main deck include Pia and Kiran Nalaar and Outnumber. The Parents have seen plenty of Standard and Modern. The ability to both go wide with 3 bodies and 4 power, in addition to being able to go over the top by throwing Thopters is outstanding.

Outnumber is not a card I’ve ever seen played in Constructed, but it makes perfect sense. If you’re happy with a card like Fiery Impulse that can only kill creatures, why not spend 1 mana to kill something you really care about? Being able to take out Siege Rhino, Kalitas, Traitor of Ghet, and other huge problematic blockers is a big gain. 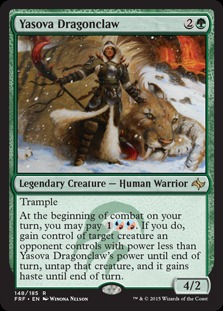 The sideboard is where things get really crazy. First off, there are 4 lands. That’s not a small number of lands to have in a sideboard. I’ve played 4 lands in my sideboard before, but only when preparing to sideboard against Mishra’s Workshops in Vintage. There are also some Den Protectors, Yasova Dragonclaws, and a full playset of Nissa, Voice of Zendikars. This gives Wrapter’s deck all sorts of ability to go long against decks with tons of spot removal. Get some planeswalkers to flood the board with creatures, pump your team, and then bring everything back with Den Protectors.

A fully transformational sideboard to have lots of game against the traditional hate is what really sets this deck apart!

WRAPTER, 9th place in the MOCS