If you want to be prepared for the new Standard format following the Pro Tour, there are a few decks you need to add to your gauntlet. R/W Vehicles is still strong, G/B Delirium is excellent, and we’ve found out that control is a viable strategy. The deck that put up the best individual Standard records, however, was U/W Flash.

This deck got very little from Kaladesh and wasn’t particularly successful before the rotation, so its dominant performance surprised me. The one card it did get, however, was the best card in Kaladesh. Smuggler’s Copter is exactly what you want in any deck that’s going to play Thraben Inspector. A 3/3 flying creature for 2 is already more than powerful enough, but getting to filter your draws, dig deeper into your deck, and ensure you have exactly the number of lands you want is incredible. Make no mistake—even with an all-control finals, Copter is still format defining.

The rumors of Reflector Mage and Spell Queller’s demise have been greatly exaggerated. Players like myself loaded up on cards like Kalitas, Traitor of Ghet or Mindwrack Demon. These are the exact kinds of cards that are really oppressed by the Azorius 3-drops. If and when the U/W Flash deck continues to rise in popularity, these cards will continue to get weaker. The tempo gained by temporarily removing a 4-casting-cost creature for 3 mana is a real issue. If this deck is hugely popular in your area and you’re looking to play something like my G/B Aggro deck, I would recommend shaving a couple copies of Kalitas from the main deck (and adding a Liliana and a Traverse the Ulvenwald). 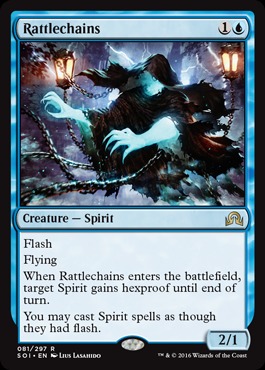 The Spirits are not especially powerful, but they have relevant abilities, attack for 2 in the air, and can crew a Copter. Selfless Spirit answers cards like Kozilek’s Return, or protects your Copters and other creatures in combat. Rattlechains has flash, which is relevant, especially when it gives a Selfless Spirit in your hand flash. It can protect Spell Queller from spot removal, which is often too big a tempo swing to overcome.

Archangel Avacyn is still the real deal. It protects your team and ends the game. Selfless Spirit can both flip Avacyn and protect your team from her other side.

Gideon, Ally of Zendikar gives you the resilience to compete against G/B and control. While the tempo of Reflector Mage and Spell Queller are valuable, this deck doesn’t have closing velocity without Gideon. He pumps out an army, creates an emblem to boost your team, or just enters the red zone himself. Gideon gives you that extra dimension and additional protection against sweepers.

With some solid removal spells in Declaration in Stone and Stasis Snare, U/W Flash has a really solid game-1 plan against the field.

The big gain from Kaladesh comes in the sideboard options. Fumigate can help mitigate an early creature rush. Fragmentize can slow down Vehicles decks. And Ceremonious Rejection is one of the best cards imaginable against Aetherworks Marvel.

U/W Flash is going to be a popular deck going forward, especially with players needing to pick up very few new cards in order to make it work. Once you’ve got your Copters, which you need for virtually any deck, any Spirits player from old Standard is basically ready to go!