The graveyard shenanigan decks have fallen off after their early hype. The power level of Prized Amalgam is high, and there are some great graveyard synergy cards in Cryptbreaker, Haunted Dead, and Scrapheap Scrounger, but the results haven’t followed.

The truth is that the graveyard decks have excellent game against control decks you can just exhaust of removal, but they can struggle to break through bigger creatures. And, with a number of small creatures in the deck, it has a prohibitive vulnerability to Liliana, the Last Hope.

So why not scrap black entirely? This is along the same lines of what some of the French players used to good results at the Pro Tour! 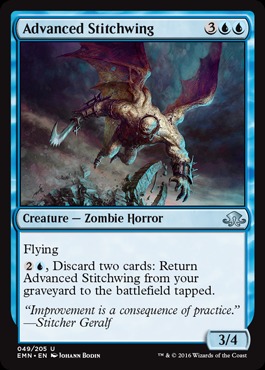 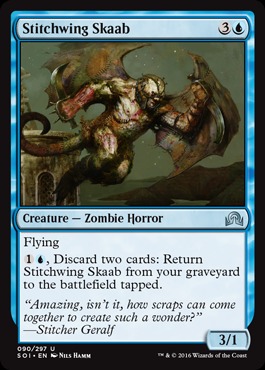 Instead of using the black recursion cards, we’re going to the skies with cards that haven’t seen much play outside of Draft decks. Advanced Stitchwing and Stitchwing Skaab are reasonably high picks in the right Limited environment, but are rarely considered for Constructed play. 3-power fliers you can bring back from your graveyard at instant speed can have a big impact, though. When combined with discard outlets and emerge creatures that can utilize the higher casting costs printed on these Zombies, you’re gaining a good deal of synergy.

The best way to get your Zombies in the graveyard is with Cathartic Reunion and Tormenting Voice. Not only does this put your good cards in your most important zone, but it allows you to churn through your deck to help find any missing pieces.

Once the flying Zombies get in the graveyard, you can discard cards like Prized Amalgam to bring them back, triggering your Amalgams. While none of these creatures will be able to block immediately, they’ll create a quick clock. They also all have converted mana costs of 3 or more, making emerge costs manageable.

A full playset of Elder Deep-Fiends are there to close the door, making sure your opponent can’t cast their Ishkanah, Grafwidow or Emrakul, the Promised End. It’ll also tap down their team so your 3-power creatures and Deep-Fiend can finish the job. 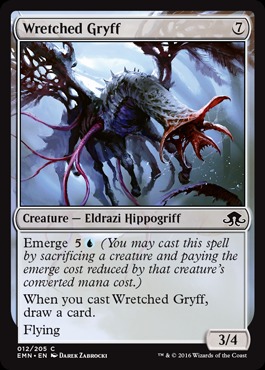 Wretched Gryff is a cheaper threat that replaces itself, and yet another flying creature in a deck full of them. Filigree Familiar is a nice way to get value out of your emerge creatures.

Kozilek’s Return is your way to control early creatures and then sweep the board of the real threats late. With the full 8 “blue” Eldrazi emerge creatures, triggering Kozilek’s Return’s return is fairly easy. You can even do it at instant speed with Deep-Fiend (and then bring back a Stitchwing after tapping down all of their lands, triggering the return of your Amalgams after sweeping their board and tapping them out—yeah, that sounds pretty good to me).

Lightning Axe is practically Terminate in this deck. It will kill virtually anything and even put a Return, Amalgam, or Stitchwing right where you want it.

A playset of Sanctum of Ugins will let you chain through Deep-Fiends or get a Gryff when you need it, and it’s one of the bonuses of playing a deck like this. You only need 1 red mana to function, so colorless lands are far more acceptable.

Graveyard decks attack the format from another angle that many people aren’t ready to deal with. UR may exploit a pretty big hole in the metagame as an awesome graveyard synergy deck that can sideboard into a bomb in Fevered Visions.