When players everywhere need to overextend to race combo decks and aggro decks, that’s when a control deck is truly primed to succeed.

Thing in the Ice is a nice cheap creature—the 0/4 body can block a number of relevant creatures. Scrapheap Scrounger is a huge part of the metagame, as are Toolcraft Exemplar, Veteran Motorist, Grim Flayer, Winding Constrictor, and Rishkar. These creatures can be sized up, but Thing in the Ice should hold them off early on. Later, it’ll flip into a massive threat and give you a huge tempo boost against opponents trying to go wide against the 0/4 body.

Torrential Gearhulk is still one of the most powerful creatures in the format. You’re playing a deck full of instants, so you’re sure to get value each and every time. The fact that you’re playing so many instants also makes it very difficult for your opponents to play against giant flash creatures. They can’t just stop attacking once you get to 6 mana, but they will often be punished for doing so. This is also a creature you don’t mind being forced to bounce back to your hand with Thing in the Ice.

Disallow has allowed control decks to play on a different dimension. It can act as just a counterspell, which is valuable, but its versatility is key. Disallow has greatly weakened Liliana, the Last Hope, as well as many other planeswalkers, which you would normally tick up to ultimate for an emblem that control decks can’t beat. Disallow lets you stop that plan in its tracks. This is also a critical weapon against an Aetherworks Marvel slipping into play—if they miss on their first activation, you have some defense against them spinning into more hits or more energy. Countering the abilities of returning Skaabs or Nissa/Gideon minuses are all massive swings in a variety of games.

Negate is actually a reasonable card against the premier aggro deck in the format, as it features Heart of Kiran, Unlicensed Disintegration, Gideon, along with other removal spells and Vehicles. While Negate on the draw may not stop the first Heart, it’s still an efficient spell for 2 mana. It’s also one of your most valuable options against Saheeli decks and other control decks. 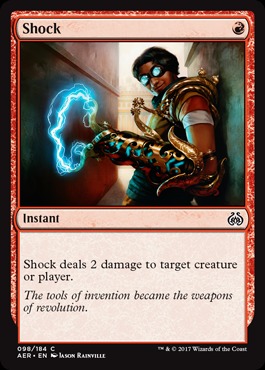 Shock can kill Scroungers, Exemplars, Ballistas, Flayers, Servant of the Conduits, and Rishkar with the trigger on the stack. Harnessed Lightning is your way to scale up with extra energy, as you have a number of enablers, as well as the potential to draw 2 copies of the spell. That gives you a way deal with opposing Hearts, Gearhulks, and creatures pumped out of normal range with Winding Constrictor’s help. Luckily, you also have Thing in the Ice to clean up any big mess.

Confirm Suspicions isn’t cheap, but it is often game winning. Clue tokens are great to have in play when you can cast everything at instant speed. If you have excess mana during your opponent’s end step, you start cashing in on extra cards. This deck is great at hitting its land drops, so Clues are awesome.

Anticipate makes sure you have the counters, lands, removal, or creatures you need. Digging 3 deep means you’re likely to find something useful the majority of the time. Glimmer of Genius maximizes your Harnessed Lightnings while getting both card advantage and churning through your deck quickly.

Access to some great creatures in Thing in the Ice and Torrential Gearhulk is what allows a control deck to thrive in a format dominated by Scrapheap Scrounger. With so many tools for cheap interaction and card draw, U/R Control is a strong option.

U/R Thing in the Ice

ROONEY56, 5-0 in an MTGO Competitive League