Oh, Temur Marvel is the best deck? How lovely and surprising! That said, this take by Brad Nelson, Paul Dean, and others looks like it truly broke the format. If you’re looking to win your next competitive Standard tournament, this is the list I would start with.

As the judges at Grand Prix Omaha announced that all matchups needed to be determined by playing Magic and not a randomization method, I joked that it makes it hard to believe that you can still activate Aetherworks Marvel. This thing would be the epitome of gambling if there weren’t so many big hits, it wasn’t so cheap to get into play, and you didn’t have the opportunity to spin again. For just 4 mana and 6 measly energy, you get to look at 10% of your library and cast the best spell you can find. This is often game winning, and provides you with additional energy when it isn’t. 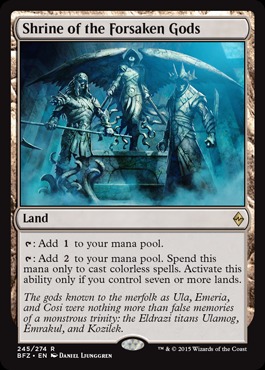 Ulamog, the Ceaseless Hunger is the best hit by so much that I think playing fewer than 4 is a mistake. Slanting your deck to have additional ways to cast the big Eldrazi is what set Yuuya apart at the PT, Paul Dean apart in previous Grand Prix, and Brad Nelson in Omaha. Multiple copies of Shrine of the Forsaken Gods, and also having an additional copy in the sideboard, are game-changers as free ramp to your giant game-winning spell.

Rogue Refiner is an easy inclusion as a 4-of in any Marvel deck (or any energy deck at all with green and blue mana), but the real surprise here is the lack of any other creature in the list. That means not a single Whirler Virtuoso, no Servant of the Conduit, no Torrential Gearhulk or Tireless Tracker. You’re in for the big spells winning the game, and you won’t be chipping away with Virtuoso or anything else here.

The other big spell you’re looking to hit off the Marvel, or just hardcast in a reasonable amount of time, is Chandra, Flamecaller. This is a card I had in my sideboard at the PT, but that Team Genesis used to great success in their main. A couple copies here can wipe the board, pressure planeswalkers, finish off an opponent, or just cash in your mediocre cards in hand for some card advantage and selection.

Attune with Aether is just too good to have in your opening hand, turning a single mana into color fixing, deck thinning, and a couple energy.

Dissenter’s Deliverance and Censor both give you access to situational cards that can cycle, and can potentially stop really important plays. They also cycle for just a single mana, meaning that this deck is going to have far, far, far, more looks at finding Marvel than any other.

A full playset of Glimmer of Genius really hammers that home. You can see so many cards and build up lots of energy to find the Marvel, the lands you need, or the payoffs. 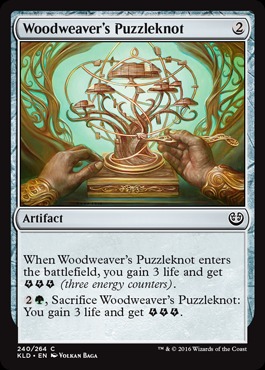 The full amount of Woodweaver’s Puzzleknots are commonplace in the main deck as the life is quite relevant against most decks, but having a single card to get you up to 6 energy is fantastic.

A main-deck copy of Negate, in addition to ways to find extra cards (6 cycle cards, 4 Glimmers, 2 Chandras, and 4 Rogue Refiners), can be the difference in stopping opposing Marvels or forcing yours through. You have another Negate and some Dispels in the sideboard for further counter battles. 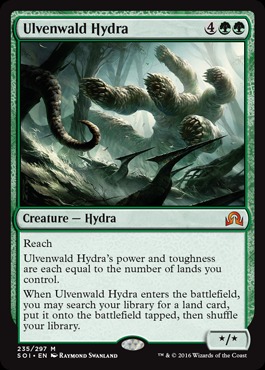 The biggest innovation in these decks comes in Ulvenwald Hydra. This is a massive threat that can block just about anything profitably. It also searches out Shrine of the Forsaken Gods, getting you super close to Ulamog. Brad had multiple copies of these in his sideboard, and Paul Dean had 1 main instead of the 2nd Chandra. This card could be a real game-changer going forward!