It can be a challenge to play a control deck in any format where you don’t know what you’re going to be up against. You can only afford to play so many threats, and if those aren’t effective in the metagame, winning will be a challenge. If your answers don’t line up with the opposing threats, and you’re not able to win the game quickly, you’re going to have a rough tournament.

With an established metagame that seems weak to control strategies, Temur Energy might check all the right boxes.

Torrential Gearhulk is such a sick value card. There are enough powerful instants in a slower format that this is going to be a complete blowout. It’s bigger than opposing creatures in combat, can counter a spell, remove a creature, or just keep digging you deeper. This is the exact type of cards control decks want to play. It turns the corner from playing defense to offense and at instant speed.

Dynavolt Tower works well with Gearhulk. While it may not affect the board immediately if you don’t have energy laying around, it’s cheap enough that it can come down on the same turn as other spells or early enough in the game where that isn’t an issue. By loading your deck up with cheap spells, especially those that provide additional energy, the Tower will keep the board looking clean throughout the game.

Maxing out on Gearhulk and Tower is exactly where I want to be. These are the type of threats I love to work with in my control deck.

Adding Tireless Tracker as an early blocker or late-game card advantage engine is a nice addition thanks to green mana. It’s a card that green decks often board in for the G/B Delirium matchup, as well as against U/W Flash and Marvel. With all of those boxes checked, it’s a nice addition to a control-style deck that can crack Clues when you aren’t using that mana on instants.

A full playset of Glimmer of Genius and 3 copies of Anticipate are becoming industry standard. Glimmer is more powerful, and also provides you with a nice energy boost. It’s excellent off of Gearhulk. Anticipate is just a nice way to bridge the gap, help find threats or lands, make sure you have something to Gearhulk for value, and a way to spend your mana if your opponent didn’t provide you with something to kill or counter.

The cheap kill spells really make Dynavolt Tower look incredible. Galvanic Bombardments and Harnessed Lightnings make sure that all of the cheaper creatures, from Expedition Envoy to Smuggler’s Copter to Spell Queller to Servant of the Conduit, aren’t doing you much harm. Radiant Flames can clean up the mess if they’re able to go wide.

Speaking of cheap spells, I love the addition of Attune with Aether. It provides energy that will proactively help Tower, and provide even more energy with Tower in play. It fixes your mana and allows you to play a lower land count. This isn’t a huge deal with control decks, but it is when you want to keep finding spells to use with your Tower. The excess energy can also make sure Harnessed Lightnings are fully powered and you get extra uses out of another sweet card in Deadlock Trap. The Trap is a great way to stop bigger creatures, as well as Gideon, Ally of Zendikar. 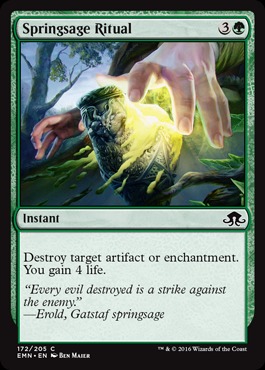 With countermagic in Void Shatter and Negate main, with plenty more in the sideboard, Temur Energy can definitely deal with an Aetherworks Marvel. If that wasn’t enough, how about Springsage Ritual? Killing an artifact or enchantment and gaining 4 life is nice, but running it back with a Gearhulk is great!

Temur Energy is an awesome way to build a control deck, and definitely one I’m looking to try out!