Today’s deck has the value cards and a bit of a toolbox strategy to give you all the options you need to win a game in Legacy.

This deck plays very few 4-ofs. But it’s a blue deck, so 4 copies of Brainstorm is simply a must. A single mana for such a powerful effect is too good to pass up, and this is what makes blue so strong in Legacy. There are also 4 copies of Ponder to make sure you find the cards you need when you need them.

The next 4-of is Baleful Strix, and this thing oozes with value. It trades with just about anything in the format, flies, is cheap to cast, and replaces itself. You can even pitch it to Force of Will in a pinch.

The final 4-of is one of the best potential value cards ever printed in Cabal Therapy. Therapy offers effective disruption and will always make sure the opponent doesn’t have the single card you’re most afraid of. With plenty of creatures you’re happy to sacrifice, as well as the Balefuls that already got value, Therapy can rip your opponent’s hand to shreds. Throw in a couple copies of Gitaxian Probe, and you’re looking at a turn 1 that ruins your opponent’s day.

This deck runs a couple copies of Green Sun’s Zenith to open the toolbox. There are a number of powerful green creatures across the mana curve, and GSZ can make your deck appear to have more copies of them when they’re at their best. 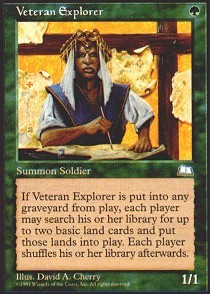 Deathrite Shaman is a busted card. It accelerates your mana, buffs your life total, drains your opponent out, and messes with reanimation, flashback, Snapcaster, and more. Veteran Explorer isn’t as common, but it’s an awesome way to ramp your mana. Combined with Therapy, you’re looking at moving your mana on up while also taking the big threats out of your opponent’s hand.

Leovold, Emissary of Trest has been doing serious work in all formats he’s legal. It’s cheap enough to get down early, shuts down entire strategies, and makes sure you’ll get plenty of value. Your opponent wants to kill your creatures, target your lands, or make you discard? That’ll cost them.

A single copy of Scavenging Ooze can gain a ton of life and keep graveyards in check. Thragtusk can put the hurt on aggro decks and value decks, as the life gain and the extra creature are both tough to overcome. 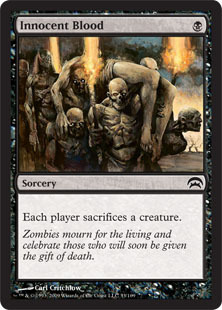 The deck is full of 2-ofs, starting with the removal spells. Abrupt Decay is versatile enough to remove all sorts of problematic permanents, but you don’t need as many copies with Counterbalance being pushed out of the format. A couple copies of Innocent Blood can shut down even the biggest reanimated creatures in the format, while sacrificing a Veteran Explorer is all upside.

Jace, the Mind Sculptor is still the best planeswalker of all time and can take over the game single-handedly. Nissa, Vital Force hasn’t even seen much play in Standard, so the cameo in Legacy is a bit surprising. Returning toolbox cards from your graveyard, drawing extra cards every turn, or just producing a nice hasty threat are all promising abilities, though. 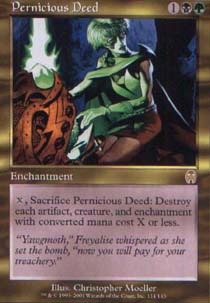 Pernicious Deed is a board wipe that doesn’t even impact your planeswalkers. Sending a Veteran Explorer to the graveyard isn’t much of a cost, either!

To add disruption, you have Thoughtseizes to complement the Cabal Therapies. A single Vendilion Clique can also combine with Therapy and make sure you take it all. A couple copies of Force of Will for whatever you couldn’t deal with round out an excellent package of interaction.

RESPONSIBLEJOSEPH12, 5-0 in an MTGO Competitive League