You got to see the power of BG Control in the hands of Jon Finkel at PT Shadows over Innistrad. If you’re looking to beat Humans and Bant Company decks, Languish is a great place to start.

Languish is a great card in Standard against so many of the top decks. With access to the most powerful sweeper, especially in conjunction with the top black removal spells in Standard such as Grasp of Darkness and Ultimate Price, black-based control decks have a real shot at defining the format going forward.

It’s actually not that challenging to make a small splash in your BG deck for either white or blue cards. You have the painland cycle in conjunction with Evolving Wilds, meaning that even a single basic and a couple painlands are actually a sufficient number of sources. The real gem here is Traverse the Ulvenwald. Traverse is great mana fixing early and then does it all late as a tutor for many powerful creatures late in the game.

In order to maximize Traverse, you’re going to actually want those powerful creatures. The Seasons Past variations of the deck aren’t really interested in creatures, so this card doesn’t work there, but you have some real awesome ones in Standard. 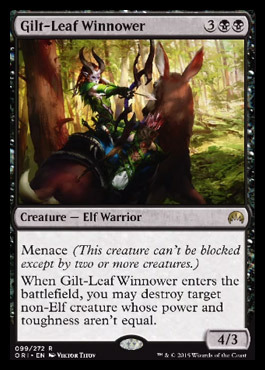 Gilt-Leaf Winnower is perhaps the most unexpected, but it’s pretty awesome against a number of decks. It kills Kalitas, Tireless Tracker, Jace, and almost every creature in Humans (Thraben Inspector, Kytheon, Dragon Hunter, Expedition Envoy, Archangel of Tithes, and Reflector Mage). It’s also a big creature that you don’t really want to bounce with Reflector Mage as it will be back shortly to kill that very Mage.

Tireless Tracker is a ton of card advantage and power rolled into one. When you have tons of cheap removal, cheap card advantage in Clues is even more powerful. Sultai also gets access to Kalitas, Traitor of Ghet, which is really where you want to be right now against many decks in Standard right now.

Being able to splash blue means Dragonlord Silumgar. The applications here are numerous. Being able to steal an opposing creature is, of course, fantastic, as taking their Archangel Avacyn or Kalitas is clearly great. The real power comes in being able to take their Gideon, Chandra, or other planeswalker, which can either immediately be ultimated or saved for future value.

Finding the best way to utilize Languish and Kalitas, Traitor of Ghet is going to be a great way to win games in Standard for a long time to come!