I decided to take a different approach to the Deck of the Day today. At this point, I’ve covered almost every deck in Standard. I’ve discussed aggro, control, all sorts of midrange, and everything in between. On top of that, of course, the format is changing soon with a huge rotation.

On April 8th, Khans of Tarkir and Fate Reforged will leave Standard and Shadows over Innistrad will take their place. It’s tough to speculate on all of the decks that Shadows over Innistrad will bring as I don’t have the full set list, and even 1 card can completely change the complexion of an entire format. Instead, rather than talk about 1 deck in detail, I’m going to talk about where the major Standard players will stand going forward.

Abzan and Jeskai have been the undisputed kings of the hill since the release of Khans of Tarkir. While each have taken turns outside the spotlight, they have both always been a prominent force. At PT Khans of Tarkir, the finals were between Abzan and Jeskai. The battle hasn’t cooled down since.

Both Jeskai and Abzan will not survive the rotation. The two most popular tournament decks will finally be gone.

The mana base is a big reason for this. 3-color decks are not going to be easy to play, and 4-color decks will be an extreme challenge. Compare that to current Standard where the fourth color is considered “free” because you always want to play battlelands to help your fetchlands retrieve your primary colors. 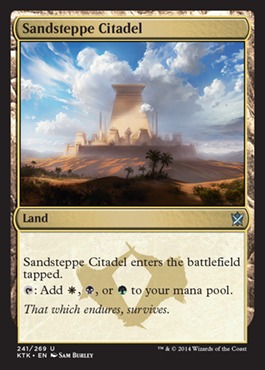 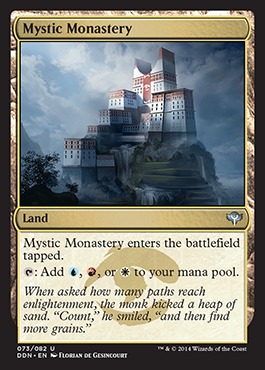 Without fetchlands, it’s going to be costly to add colors to your deck. When Polluted Delta can retrieve blue, black, red, and white, it’s essentially a quad-land. That type of mana fixing is incredible. The tri-lands are leaving with the rotation, however, and they were key to the success of these decks before fetchable battlelands rendered them obsolete. It was almost blasphemous to consider cutting a single copy of Sandsteppe Citadel or Mystic Monastery before Battle for Zendikar completely changed our mana bases.

Now, even if you could easily access 3 or 4 colors, is there a good reason? The key cards for these decks were mostly from Khans of Tarkir. Abzan decks were typically GB decks splashing white or GW decks splashing black. This gave the deck some aggressive creatures while still getting the payoff of Anafenza, the Foremost, Siege Rhino, and Abzan Charm. With all 3 of these cards rotating, is there even a reason to play more colors?

The same is true of Jeskai. Mantis Rider, the original pull, is gone. Playing more colors with great mana helped this deck’s curve, but the early drops here are also rotating. Soulfire Grand Master and Seeker of the Way move on, as does Monastery Mentor.

With the threats and mana all but gone, the draw to play these extra colors goes with it. This is also a big hit to Painful Truths. With less access to a third color, the power level drops off dramatically. Many see Truths as the solution to the loss of Dig Through Time and Treasure Cruise, but it’s taking a serious hit.

Also be aware that the premium removal spells of 4-color decks like Dark Jeskai will also be leaving. Crackling Doom and Murderous Cut were cheap removal spells that could kill large creatures easily. If Ultimate Price and Roast become the removal spells of choice, this will change the way decks are built.

Rally isn’t losing too much outside of, well, Rally the Ancestors. This will fundamentally change the deck, but that was already going to have to be the case for any 4-color list.

The primary functionality behind this deck is still there. Collected Company is going to be a major player going forward. Jace, Vryn’s Prodigy and Reflector Mage are simply outstanding. The bulk of Bant Company decks will still be available. The actual direction the decks go will depend on what comes out of Shadows over Innistrad and which colors are most valuable since Windswept Heath and Flooded Strand won’t be around to do the heavy lifting on fixing mana.

Sylvan Advocate’s stock is going to go up in the absence of Monastery Swiftspear and Seeker of the Way. 2-toughness cheap prowess creatures made it tough on 2/2 creatures, but now that they’re gone, the 2/3 vigilance has the chance to really shine.

The Eldrazi aggro/midrange deck is one I’ve covered in detail, so I’m going to forego that for this article. It loses close to nothing and I expect it to be a huge player in Standard going forward.

Ramp decks prey on midrange decks. Without an early assault to threaten it, Ramp can easily get the time it needs to go over the top. If Standard continues to slow down, which is the direct result of having fewer quality aggressive creatures, weaker mana bases, and less powerful threats (you can’t get much more pressure than a Warden of the First Tree, Anafenza, Siege Rhino, or Mantis Rider), it gives ramp a boost.

The big loss for this deck is Ugin, the Spirit Dragon. Ugin is one of the best cards in the deck, but the reality is that Chandra, Flamecaller can do most of the work. With Siege Rhino rotating out of Standard, the need to deal more than 4 damage to the board also drops. The format may eventually shift to compensate, but Chandra seems like the type of card that is going to dominate for long periods of time.

Wooded Foothills is a bigger issue if casting Chandra is important. You have Explosive Vegetation to help you get to red mana, but the new shadowlands aren’t exciting for this deck. The battlelands are nice, since you have a lot of basics, but Shrine of the Forsaken God and Sanctum of Ugin are still cards you want to play. Having your lands not come into play untapped, especially on turn 4 and onward when you’ll want to cast World Breaker or Ulamog, the Ceaseless Hunger, is horrible.

Expect for Kozilek’s Return to be a major player going forward. If token strategies or aggressive strategies become prevalent—certainly possible if Ramp strategies do well—Kozilek’s Return is the best answer you have. Expect other red decks to utilize Kozilek’s Return even without access to Eldrazi to bring it out of the graveyard. Radiant Flames takes a serious hit without an easy way to get to 3 different colors of mana, so the instant-speed bonus of Return will prove to be the difference.

With Crackling Doom leaving the format, Esper Dragons has the chance to rise. The threats are all still legal and the Dragonlords are going to be far more challenging to deal with than they ever have been before.

Dig Through Time is a huge loss that isn’t easy to replace. You have Painful Truths, but it comes at a real cost, and getting to three different colors of mana on turn 3 is far from trivial anymore. Dragonlord’s Prerogative is an awesome card and will usually be the better play on turn 6. Getting to 6 lands, however, is not a guarantee. You need to play so many lands to guarantee a high likelihood of hitting your first 6 land drops, and once you get to 28 or more lands, the risk of flooding skyrockets. Without Dig to help pull you out of a flood, that’s a real risk.

Jace is also weaker in this strategy than it was when you had access to fetchlands. Being able to flip him before turn 4 is now unlikely, giving opponents plenty of time to find extra answers.

If the common removal suites include Roast and Ultimate Price, Dragonlord Ojutai sure feels like it’s going to be in a nice spot. You have cards like Stasis Snare and Ruinous Path, but the mana continues to be a real concern. This deck can max out on all 8 battlelands while also playing Shambling Vents, so there are plenty of options if you aren’t overly concerned with some lands coming into play tapped.

With Languish and Planar Outburst as sweeper options that can help Esper come back from behind, it should have some legs going forward.

If the format is slowing down, it’s a great time to be aggressive.

Monastery Swiftspear is a huge loss. One of the best red creatures ever printed, Swiftspear is still doing work in Modern and Legacy. The loss of such a powerful 1-drop will slow the deck down and make insane draws harder to come by, but you can always replace great early creatures with decent ones.

You also lose your best token maker in Hordeling Outburst. Limiting the ability to go wide is a real hit when trying to play an Atarka’s Command strategy.

The loss of the combo is another setback, although with Reckless Buchwhacker and other cheap creatures, you didn’t necessarily need to depend on Become Immense. Zurgo Bellstriker, Abbot of Keral Keep, and Reckless Buchwhacker are all still legal, giving a solid foundation for an aggressive deck.

The real problem comes in whether you can still play Atarka’s Command. Red decks have been splashing for Command aalone for some time now, and with very good reason. The card is amazing. Atarka’s Command has a floor of being an instant-speed Lava Spike, but the ceiling involves killing several creatures in combat and dealing an additional 5+ damage to your opponent. Command can be 7 damage for 2 mana at instant speed. That is unbelievable.

Without red fetchlands, being able to actually cast Command becomes a real challenge. You can’t load your deck up with battlelands or with shadowlands since a land entering the battlefield tapped, even on turn 1, can be a complete disaster. The risk of not being able to cast your spells on curve may be too much to actually add green mana to the deck. Maybe there’s a way to make the mana work, but that’s my biggest concern with Atarka Red.

There are a number of decks that will be wiped out and there are sure to be plenty of new decks on the rise. Jace, Vryn’s Prodigy is still going to be a major player and has tons of synergy with everything I’ve seen in Shadows over Innistrad. Graveyard strategies and interactions tend to go really well with looting!

The other card that is sure to gain a ton is Gideon, Ally of Zendikar. The exact shell that he will most excel in remains to be seen, but there aren’t many great answers for a Gideon. The removal of Crackling Doom makes the animated planeswalker an even bigger threat, and there isn’t much that can go toe-to-toe with him.

It just so happens that one of the best cards spoiled so far in Shadows over Innistrad is also white.. The front side of this card is already amazing, but the flip side can be game-ending. And don’t overlook the combination with another white bomb in Eldrazi Displacer. Flipping Avacyn and then blinking her with the trigger on the stack can be a one-sided Wrath, sweeping your opponent’s board and leaving your team indestructible.

There are lots of cool things going on in Shadows and there are sure to be tons of new and flavorful decks going forward. Hopefully this helps you in your pursuit to get an early start on new Standard. Any other decks in Standard you think will continue to see success going forward? Will BR Dragons shift into Zombies or Vampires with all the cool Shadows cards? Sound off in the comments!