Bant Eldrazi has long been the preferred way to play overpowered, cheap colorless creatures in Modern. Combining the Urza lands with some of the more expensive Eldrazi produced another consistent and powerful deck. The R/G variant of Eldrazi was a powerful option when Eye of Ugin was legal, but has faded into obscurity. But some powerful red cards, especially against aggressive creature decks, may change things.

The appeal of adding red to your Eldrazi decks comes from damage-based spells. Lightning Bolt is unquestionably the best of the bunch. The ability to deal 3 damage for 1 mana at instant speed is still one of the most efficient removal spells we have ever seen. Use it early on a mana creature or late on a planeswalker. Lightning Bolt also gives your creature-based deck reach—an important quality against decks like Death’s Shadow.

The other main draw to playing red is its cheap and efficient sweepers. With a ton of large, colorless Eldrazi to bring it back, Kozilek’s Return is the best of them. Not only do you get instant speed when you’re wiping the board of all sorts of tiny creatures, but you’re sure to take out everything in the middle stages of the game if your opponent is able to rebuild. With many decks like Merfolk, Hate Bears, Burn, Infect, anything with tokens (including potentially Storm), Affinity, and others, this is a brutal weapon to have at your disposal. 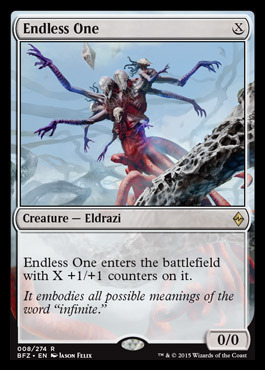 You also have Endless One to come down early to block and trade, in the midgame as an aggressively costed 4/4 for 4 or 5/5 for 5, and in the late game to flashback Kozilek’s Returns as you cast them for 7 or more.

The main Eldrazi creature threats are all still here. Matter Reshaper is excellent for any sort of attrition matchup. Removal spells aren’t impressive against it, and it trades up nicely. Thought-Knot Seer dodges most removal in the early game and completely alters your opponent’s game plan by taking a critical spell from their hand. Reality Smasher is hard for many decks to deal with, offers card advantage if they do, and ends the game in a hurry.

Ancient Stirrings may be the most important card in these Eldrazi decks. Not only does it find any of your creatures, it also can find key lands like Eldrazi Temple or your best ways to interact. This deck runs a single Relic of Progenitus, a great tool for interacting with graveyard strategies, to find with Stirrings. You can also get Engineered Explosives or even Kozilek’s Return, since it’s colorless. 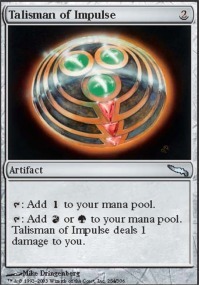 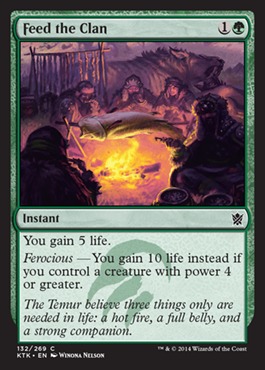 Talisman of Impulse gives you additional color fixing and acceleration into turn-3 Reality Smasher, which is always nice. There’s even a main-deck Feed the Clan to gain 10 life that your opponents will never see coming.

Eldrazi are a dominant creature type, and finding the right shell has yielded incredible results since Oath of the Gatewatch. When Lightning Bolt and Kozilek’s Return are good for a metagame, R/G Eldrazi is a great direction to take.

ARTYMAC, 5-0 in an MTGO Competitive League