White and blue have historically been the control colors, and that is still very much the case today. The quality of the removal that you pair with blue has always been an important element in building a control deck. But when the removal becomes more important than the permission, and planeswalkers offer better card advantage than the mediocre card draw we have in Standard, maybe blue isn’t necessary?

The black and red planeswalkers go right up the curve. You’re playing the most copies of Liliana, the Last Hope as the cheapest planeswalker and best way to deal with small creatures. With 3 in the list, you get early interaction and a way to recur your creatures late if you don’t want to go for the powerful ultimate. As you move up the curve, there are just 2 copies of Chandra, Torch of Defiance to deal with midsized creatures and gain some card advantage as needed. Then there’s a single copy of the 5-mana Ob Nixilis Reignited to deal with whatever slipped through the cracks. Each of these can also give you access to more cards, eliminating the need for traditional card advantage spells.

If those planeswalkers weren’t enough, Chandra, Flamecaller can dominate an entire game. She’s a fast win condition, can sweep the board of smaller creatures, and can cash your hand in for additional cards.

The removal in this deck is so strong that you’re only playing a single copy of Fatal Push. With so many ways to interact with creatures and a whole bunch of planeswalkers that can control the board, you don’t need as much conditional removal. Grasp of Darkness, however, can deal with many of the larger creatures of the format. Abrade gives you the versatility of killing early creatures and artifacts when necessary.

Sweltering Suns gives you the option of sweeping the board of small creatures or cycling when necessary. When all those small creatures are dealt with, there’s a full playset of Doomfalls to take care of the big threats. Being able to use Doomfall as a discard spell when you’re removal flooded gives the deck a lot of extra play.

The creature selection follows a similar path as the planeswalkers. The cheaper ones come in greater numbers and you diversify your threats with smaller numbers of more expensive options. The full amount of Gifted Aetherborns gives you an early creature that trades up with just about everything in the format. Lifelink and deathtouch mean the Aetherborn do great work on both offense and defense and can protect your life total both ways.

Kalitas, Traitor of Ghet is an all-star in these removal-heavy decks. A large lifelinking threat is a brickwall against aggro, and you have 1- and 2-mana removal spells galore and lots of planeswalkers that can kill creatures, so playing Kalitas and making a Zombie in the same turn isn’t hard to pull off.

Gonti, Lord of Luxury gives you more card advantage from a creature that is already going to trade up thanks to deathtouch. Some Goblin Dark-Dwellers add to the card advantage theme as you can run back your removal spells or a Doomfall to clear out their hand. 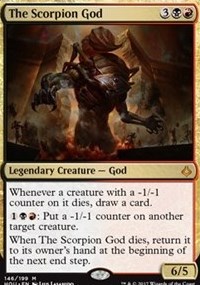 Single copies of Glorybringer, Noxious Gearhulk, and The Scorpion God give you expensive threats that can end the game quickly while clearing the way to do so. 4- and 5-power creatures that double as removal spells form a perfect top end for this deck.

While blue has some powerful permission, spells like Glimmer of Genius leave a lot to be desired. With the power level of black and red planeswalkers, maybe blue isn’t necessary.

TKFRHTLVJ, 5-0 in an MTGO Competitive League