Aggressive decks continue to evolve in Standard, and this is likely what I would run if I were looking to play one at my next event. Better 1-drops, creatures that have resiliency against removal, and the ability to go wide make R/W Aggro an impressive build.

You’re not going deep on red here, but what you get for it is important: the best 1-drop creature in Standard. It wasn’t too long ago that Raging Goblin was playable, and this is both easier to cast and can be cashed in for card advantage. The fact that you don’t even need red mana in the first few turns to make this deck fully functional is also important, and getting to lead on Bomat gives your deck an early game and late game all in a 1-mana spell.

The only other red card, if you want to even say that Bomat Courier is red, is Hazoret the Fervent. If you’ve played Standard in the past year then you’re well aware of what Hazoret has to offer. This deck is incredibly low to the ground with lots of 1-mana spells, so getting Hazoret online to start attacking on turn 4 is feasible, and this is as good a threat as you’ll find. With so many cheap creatures, you’re already taxing your opponent’s removal, and if they don’t have one of the few spells that can exile a Hazoret, they’re going to lose to the God. 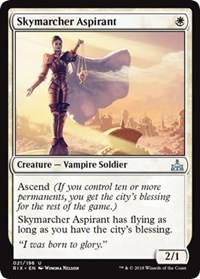 You’ve got the full sixteen 1-drops in this deck. Skymarcher Aspirant is great on turn 1 as a way to start attacking for 2, and this deck can get the city’s blessing pretty quickly thanks to all of the cheap creatures, sending the Vampire to the air to keep up the pressure later in the game. Toolcraft Exemplar needs an artifact on the battlefield, but when you have one, the Exemplar is truly great as a 3-power attacker for one. With fourteen artifacts in the deck, it’s not a guarantee that you’ll immediately have one, but it’s likely.

Finally, you have Legion’s Landing as another early drop that becomes a true weapon as the game progresses. This deck has a plethora of draws capable of attacking with three creatures on turn 3 and flipping the Landing immediately. With plenty of 1-drops, token producers on 2, and then Bomat Courier as a haste threat, Legion’s Landing will flip consistently.

Servo Exhibition punishes opposing 1-toughness creatures, is great against all of the 1-for-1 removal in Standard, and is a fantastic combo with Legion’s Landing.

Adanto Vanguard is another in a long line of fantastic aggressive creatures. It plays well against many of Standard’s best removal spells and attacking for 3 with your 2-drop is amazing. In a similar vein, Scrapheap Scrounger is yet another aggressive 3-power creature for 2, although this one won’t block. Scrounger also plays well against many removal spells, and while you don’t have any black cards in the deck, you do have a handful of black sources to make sure that you’re getting your Scrapheap value.

Aethersphere Harvester makes racing really hard and gives you another threat that traditional removal spells often struggle with. Having an evasive lifelinking threat that also can help fix your mana with Aether Hub gives the deck another axis of attack. 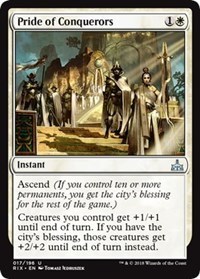 With so many small creatures flooding the board early, you’re at a risk of getting brickwalled. You’ll usually have gotten plenty of damage in and you’ll just be looking to finish the job, but this deck forgoes removal entirely. Instead, you’re looking for global pump, and Pride of Conquerors is the best of these options. Pumping your entire team +2/+2 for just 2 mana, and at instant speed, can blow out opponents in combat, stop opposing removal spells, and just force through tons of damage. For the 5th copy of Pride, you have Trial of Solidarity as yet another way to pump all your creatures and it will even allow you to play defense on the same turn (truly excellent with both Hazoret and Harvester as they’re both great blockers in a deck that doesn’t have many of them).

This is how aggressive decks were meant to be built. It has no main-deck dead cards even against creatureless decks and lots of ways to force through damage, so this is a deck you should be prepared for in Standard if not sleeving up yourself!