Legacy is definitely a format where you can go deep and do some sweet things. Reanimator strategies are some of the most powerful in the format, but that doesn’t mean all the varieties have been explored yet. 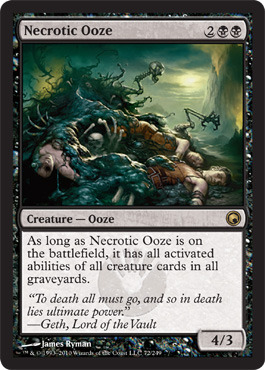 Necrotic Ooze is a card I know all too well. I got “tricked” into playing a Necrotic Ooze deck during Day 3 of Worlds in 2010 by Conley Woods, and oh boy was it an adventure. This is a crazy card that takes on the abilities of all creatures in all graveyards, which can lead to some spectacular sequences. 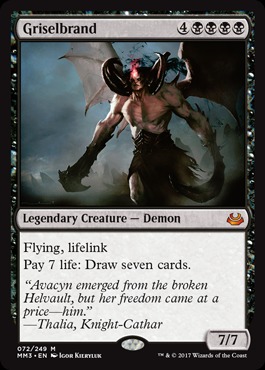 Griselbrand is an amazing creature to reanimate or to put into your graveyard for Ooze. With an activated ability that allows you to draw 7 or more cards, the big Demon can put the game out of reach quickly. By drawing lots of interaction, you can rip apart an opponent’s hand before ripping apart their life total. 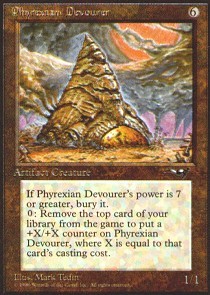 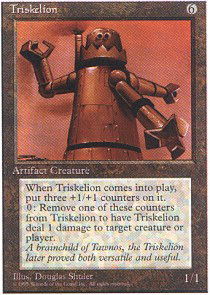 The real beauty of the Necrotic Ooze comes in the combo of Phyrexian Devourer and Triskelion. With just a Devourer in the graveyard, you can activate its ability to make your Ooze a massive creature and win the game in a single swing. Sometimes you don’t have enough time to untap or there’s something in play keeping you from attacking. Maybe they have a removal spell and you need to be able to win at instant speed. Triskelion takes all the counters that the Devourer ability puts on your Ooze and lets you sweep the board and kill your opponent. Triskelion is a more powerful creature to reanimate than some of the potentially cheaper options, so it gets the nod. 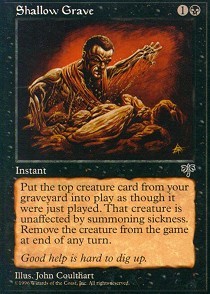 Reanimate and Exhume are well-known quantities in the hands of any Reanimator player. They’re cheap ways to bring back your biggest threat, but they both have downsides. Shallow Grave certainly comes with its own negatives, but being cheap and giving the creature haste are perfect for drawing a bunch of cards off Griselbrand or killing an opponent when you have an Ooze on top of a Devourer in the graveyard. 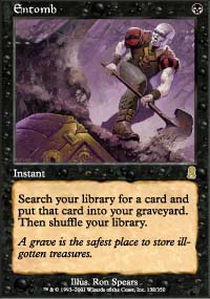 Actually getting creatures to the graveyard is important, and Entomb is the best in the business. A 1-mana instant speed tutor for your graveyard is absurd and sets you up perfectly. You can fully go off at instant speed if you have some important cards already binned as you can Entomb an Ooze and Shallow Grave it to combo off.

Your interaction does a wonderful job of doubling as an enabler. Cabal Therapy can rip your opponent’s hand apart and make sure you can’t be stopped. Collective Brutality can also strip a key spell or kill an important creature. Brutality makes it easy to discard cards from your hand to fully enable escalate, but Cabal Therapy can be pointed at yourself in a pinch to allow you to discard a monster. 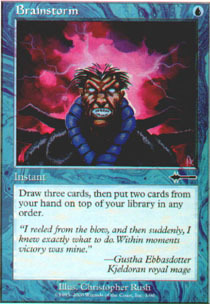 Gitaxian Probe is one of the biggest mistakes in Magic’s history, but I guess you should take advantage of it while you have it. Making your deck smaller is great, seeing what your opponent is up to is awesome, and the combo with Cabal Therapy is back-breaking. You also have the full playset of Brainstorms and Ponders to set up your draws and combo off quickly.

The last piece of the puzzle is here to make sure that you can go off as quickly as possible. Dark Ritual is incredible, as Entomb plus any reanimation spell can give you a big turn 1. Lotus Petal further accelerates your mana and you’re more than okay with the card disadvantage since you spend all of your mana the turn you’re setting up to win.

Necrotic Reanimator is fast, powerful, and above all else, totally cool. Combo’ing off with Necrotic Ooze is a great way to win a game of Magic and I highly recommend that you give it a try!